We visit the Halifax set of Michael Ray Fox and Richard McQueen’s new movie, funded by the First Feature Project. 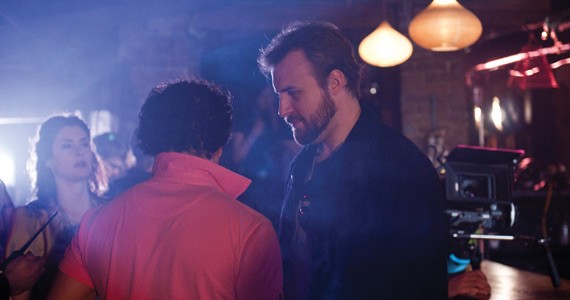 Krista Comeau
Michael Ray Fox on the set of his first feature.

A couple dozen crew and cast members are nestled into a tiny apartment in Halifax's north end. Chairs, couches and a computer desk occupy the main area and paintings decorate the walls, with cameras and lights accounting for the rest of the space.

Writer-director Michael Ray Fox sits on a chair, prompting the actors with their lines as they block out the next scene, a half hour before lunch. Rhys Bevan-John plays the lead, Will, a computer-game savvy, autistic man. The feature film has a micro-budget, so every minute counts, and as they approach their last few hours in the apartment the pressure is on. Once they're out, it's on to the next location.

"It's been a tremendous experience for me. I've worked on film and television sets in the past, but usually only for a day or so," says Bevan-John. "And everything is shot out of sequence, so it's a real test to be able to know exactly where this guy is emotionally, and on any given day in the movie world."

When Fox penned the initial version of Roaming in 2007, he tailored it for a small budget: character-driven, rather than action-based, with few locations. The kind of script the First Feature Project was looking for---Fox and producer Richard McQueen, who both have experience on short films, received a combined $110,000 from Telefilm and Film Nova Scotia to make Roaming.

"A lot more attention to detail has gone into it than I would have done myself," says Fox in the basement of the Needham Community Centre, where the crew eats lunch. "We really have a very talented crew."

The benefits of the First Feature Project are not only monetary. Fox and McQueen have a mentor, filmmaker Michael Melski (Charlie Zone), to assist in the transition from short to feature-length filmmaking. "He's really opened my eyes in terms of the way I direct actors specifically," says Fox, who also runs White Lance Films. "You visualize what the movie is ahead of time. In order to make that happen in real life, I think what I've often done is described it, and that often doesn't work, because you often have to help actors get into a head space where they are making it their own."

"It's a learning curve," says McQueen, who wrote his first screenplay in his late teens and studied film at the University of New Brunswick. "I've never been responsible for so many people."

Bevan-John sees the cast and crew around him stepping up to grab the opportunity, too, recognizing that Roaming could pave the way for more work in the industry. "If I stink in this movie, why would anyone put me in another movie? The stakes for me are high."

A total of 15 days on set, the filming takes place at a few locations across the city---including the cramped apartment, the former Tribeca, up in the Hydrostone and down at the VIA Rail station. If all goes as planned and they hit no major delays, says Fox, Roaming will debut at the upcoming Atlantic Film Festival this fall.

He is grateful for the First Feature funding, though was always determined to shoot his movie, by hook or crook.

"I think I would have found a way to make it either way," Fox says, "but it certainly wouldn't have been nearly as good."