Bigger than Juan, stronger than Dorian, here’s the latest on the storm headed our way. 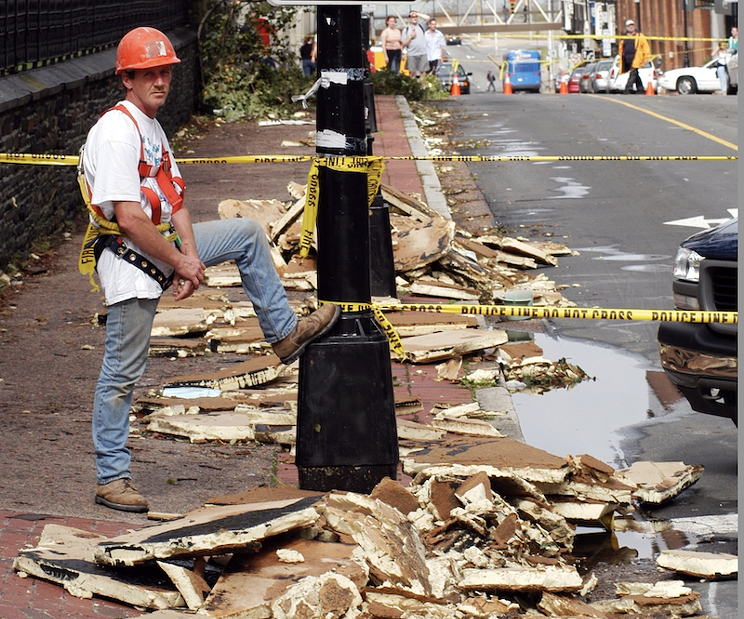 The Coast
The aftermath of Hurricane Juan in 2003.

“Historic” is the word Environment Canada meteorologist Bob Robichaud is using to describe the hurricane that’s barreling toward Nova Scotia. “It's going to be a storm that everyone remembers once it's all said and done,” he says in a news conference on Thursday afternoon.

This sentiment was echoed by John Lohr, the provincial cabinet minister responsible for Nova Scotia’s Emergency Management office. “Fiona is projected to be a significant and historical weather event for Nova Scotia,” he says. “It has the potential to be very dangerous.” Mayor Mike Savage didn’t mince his words at the news conference: “This storm is gonna hit us, folks. It’s gonna hit us in the face.”

Some meteorologists are saying Hurricane Fiona won’t just be memorable, it will be unprecedented. Cris Scott, chief meteorologist for the Weather Network, is calling Fiona “a storm for the ages,” adding that “this is not just a hurricane, it's more like a hurricane and a nor'easter combined." According to that article, Fiona will mix the intensity of 2003’s Hurricane Juan with the size of Hurricane Dorian from 2019.

Even across the border, CNN is saying Fiona could be our strongest storm ever. A meteorologist from the Canadian Hurricane Centre told the broadcaster it “could be Canada's version of Hurricane Sandy.”

How to prepare for Hurricane Fiona: Get ready to batten down the hatches this Friday.

What makes Fiona so extreme is what meteorologists call a “deep hybrid low pressure system,” which has both tropical and intense winter storm properties. According to some predictions, the storm could break the record for the lowest pressure storm in Canadian history. At the risk of oversimplifying, lower pressure equals a more severe storm. The models are predicting 925 to 935 millibars, which would beat the previous record of 940 millibars. A range of 920-944 millibars of pressure is associated with Category 4 hurricanes.

According to the most recent predictions from Environment Canada, we’ll start feeling the effects of Fiona as it approaches on Friday night. The storm will pass over Nova Scotia early Saturday morning and through the day. Sunday is predicted to be clear and sunny. Areas across the province are expecting to see 100-200mm of rain, with more than 200mm closer to Fiona’s path. Wind gusts will exceed 100km/hr.

“This is a serious threat and everyone has to take it seriously,” Savage says. Unlike Juan, Fiona isn’t forecast to make landfall over Halifax, but Fiona is bigger than Juan. It will pass over eastern Nova Scotia and Cape Breton. But Savage tells Haligonians to expect extended power outages, downed trees and local flood conditions. We’re still getting extreme wind and rain. 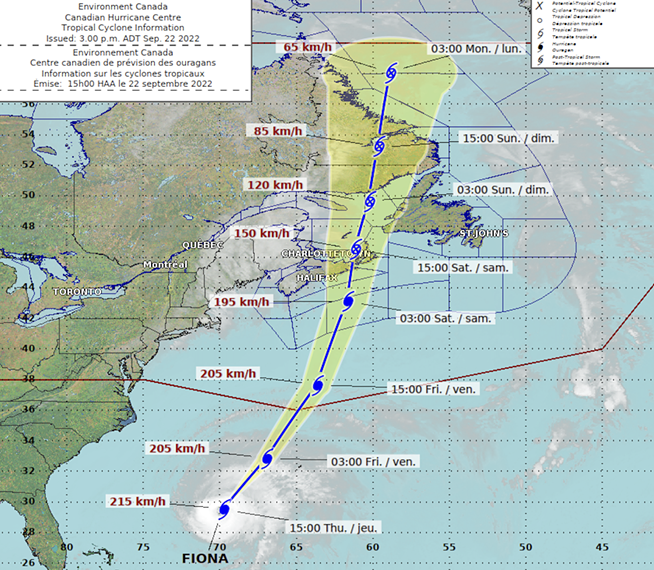 At the news conference, Dave Pickles of Nova Scotia Power says because trees are still in full bloom, they’ll come down easier and cause more outages. He adds that 800 NS Power staff are mobilizing right now. The message to Nova Scotians from everyone at the news conference was simple: be prepared and start preparing now. 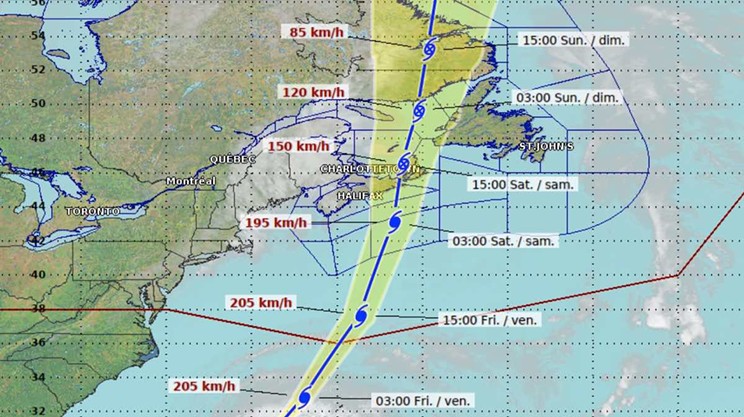 Updated: What Hurricane Fiona means to Halifax's weekend plans: What parties are cancelled, what festivals are postponed and other changes for the likes of Oysterfest, Afterwords, Hopscotch, FIN and Prismatic.

For people who are sleeping rough, starting Friday at 4pm the city will be offering transportation to the Dartmouth East Community Centre and Elizabeth Seton building in Sackville, where they’ll be given food and shelter. There’s room for 15 people in Sackville and 60 in Dartmouth, according to Savage. Beacon House is running the Sackville operation and 902 Man Up is in Dartmouth. Comfort centres will open on Saturday in areas with the most damage.

People are urged to stock up on enough food, water and medication for 72 hours; put away any outdoor furniture that could fly away; and charge their phones. If you live close to the coast, be prepared to evacuate at short notice.

Lastly, make sure to check up on your neighbours and offer a helping hand when you can. For more information on how to prepare for Hurricane Fiona, check out our list here.

From Team Coast, stay safe everyone.