In the penultimate scene of The Last Epistle of Tightrope Time, Neptune’s 60th season opener, which closes Sept. 25, Walter Borden unfurls a quilt on the stage floor. He crouches low to the blanket’s surface, saying:

where them pieces don't mean nuthin'

when they scattered all about,

but if you take the time to lay them

they got a tale to tell

but keep in mind

it's how you weave them pieces

it's the stitchin', not the patches,

that completes your handiwork.”

HAUI (Howard J. Davis)
Borden with the quilt he lays out in the play's closing sequences.


Casting a knowing eye to the crowd below him, Borden—a Dora-nominated, Order of Canada-honoured legend of Canadian theatre—is offering some hard-earned life advice, yes, from one of the show’s 10 characters. But he’s also handing his audience an ornate skeleton key that unlocks the meaning of the show itself.


A vision of time that calls Kurt Vonnegut’s Tralfamadorians to mind (aliens who view time as a series of simultaneous events as opposed to our linear understanding), Borden spends Tightrope Time—his famous, semi-autobiographical solo play—splunking his own past, dredging up from the muck of memory the types of characters that’d populate a Toni Morrison novel: Fire-and-brimstone preachers at the pulpit, mink-sporting sex workers with tongues sharper than vinegar and aged matriarchs who border on the omnipotent.


He describes breakfast frying on the stove in his mother’s kitchen, smelled while nodding out in a diner booth decades and provinces away (how does an egg feel as it fries?). Through his lyrical monologue that borders on poetry, viewers feel the cold in their bones of working a night time street corner or the mossy bank of a river where, in childhood, a voice from beyond told Borden he was destined for something others wouldn’t comprehend. 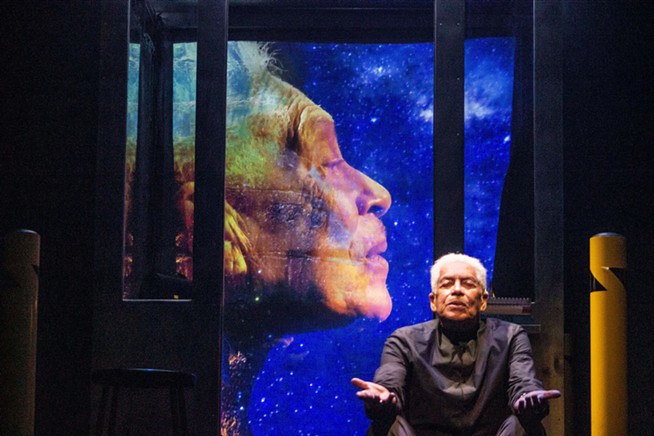 The intentionally incomplete memories presented bump up against one another, out of order and context. Details aren’t always made clear—but the feeling, the impression, (the stitching) is always as direct and readable as a sans-serif font. Borden isn’t interested in burdening you with the blandness of details when, instead, you could swim in the abyssopelagic depths of his life’s ocean.


The play, which Borden says he’s rewritten several times over as many decades, is esoteric and dense—a gutsy offering from Neptune, which by nature of being the region’s largest theatre can’t always skew experimental. After a pandemic that made live performance impossible and a 2021-22 season that played it safe with crowd-pleasers, Borden’s play is a palate cleanser, a reminder in this golden age of comfort viewing that challenging viewing is just as important. It’s also a landmark work, the first piece of Canadian theatre to explore male homosexuality from a Black perspective that also fearlessly discusses life in poverty.


The play has grown and morphed alongside Borden: When it was first penned in the mid-’80s, the work was that of a young Black, gay man looking to his future. Several decades and rewrites later, Neptune’s staging sees a man “in the winter of [his] life”, as Borden puts it, looking back on what made him him.


Borden dedicates his epistle (a formal letter dedicated to a particular group, like those from the apostles that comprise the New Testament) to “children of the diaspora, that is–the family.” He brings the scraps of his past to an audience above a stage that mimics a quilt pattern, spaces that represent stitching lighting up in support of his sharpest lines. From the set’s liminal space that looks like a toll booth on the highway of time, fluorescent lights hum and snap, reminding the viewer that they’re watching a story—while Borden examines where “story” fits into life story, anyhow. After Borden’s final, searing lines, the house lights go up. The audience members spill out of Neptune’s main doors into the cool autumn night, restitching their own narratives on their way home.