Séamus Gallagher and John Devlin have lined the walls of two Ontario galleries. 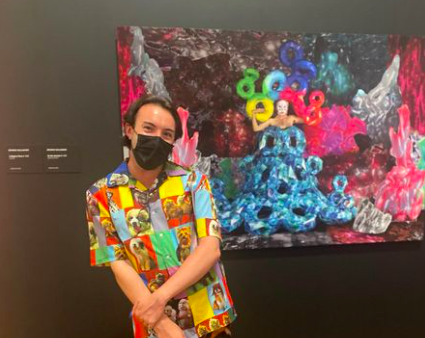 The old saying that good things come in threes has certainly held true for recent exports from Halifax’s art scene: After two-time Sobey award shortlister Jordan Bennet unveiled an ambitious mural at the Ontario University of Craft and Design—alongside a solo exhibition at OCAD’s gallery—two more local artists have secured a spot in Ontario galleries.

Halifax-based artist Jordan Bennett unveils new mural in Toronto: Titled pi'tawita'iek: we go up river, the 145-by-48 foot work is on view at OCAD University.


Outsider artist John Devlin is long-used to international buzz over his drawings, with agents in London and Paris representing him. At 68, though, he is making his overdue Toronto debut with John Devlin: Out of a heart of quiet—on view until August 27 at Toronto’s ESP (Erin Stump Projects). The 35 works on paper are inspired by the artist’s relationship with the cosmos.

John Devlin’s second act, from outsider to world star: The local artist is acclaimed for drawing utopia, but can’t imagine a better city than this one.


Over at Ottawa’s National Gallery, meanwhile, Halifax artist Séamus Gallagher is part of a trio of emerging photography-based artists being lauded with the 2022 New Generation Photography Exhibition. On view until December, the show highlights groundbreaking new voices in the medium—and sees Gallagher share some elaborate works combining drag, wearable sculpture and, of course, photography.

"Art has always been a way to explore your own identity and also trump notions that society imposes on us as a whole,” Gallagher told The Coast back in 2019. All three artist’s work proves this point exactly.