“Today while you and I are talking, there's a woman walking out of the clinic across the street who just was told she had breast cancer,” Dr. Paola Marignani says. “I want that woman to know she's got another 50 years.” 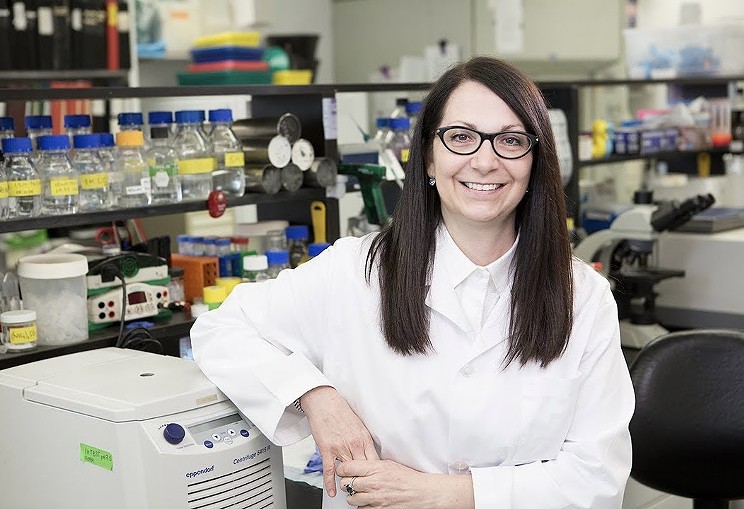 Contributed
Dr. Paola Marignani's lab has received a $250,000 grant from the Breast Cancer Society of Canada to study HER2-positive breast cancer, which makes up one third of breast cancers in Canada and has a high rate of recurrence.

If you were to enter Dr. Paola Marignani’s lab at Dalhousie University, you’d find every surface covered in writing. That’s because she sees the process of coming up with an experiment the same way an artist maps out their vision before touching the canvas. “Art and science are the same to me, there's no difference between the two,” she says. You conceptualize, draw up a plan, and factor in as many variables as possible. Then you modify, adapt, and erase. The designing of an experiment is Marignani’s favourite aspect of her work. A close second is getting data. When the tubes filled with an invisible substance finally spit out a sequence, “It’s a thrill.”

Marignani realized she wanted to chase that thrill for the rest of her life when she was a fellow at Harvard. “Everyone around me was eating, sleeping, breathing science, and the energy was electric. And being part of that electricity was really a defining moment where I said, ‘This is it. This is all I want to do. I don't think I can do anything else,’” she says. “This is who I am. This is what I'm going to do, and I want this electricity every day.”

It’s not a surprise that the Halifax-based cancer researcher founded Canadian Women in STEM, a network for women to talk about challenges they face in their work, in 2016. “There was really no place for anyone to talk about this because you'd be judged,” she says. “I was sitting in a cafe, frustrated after a series of events and I just started it right there. I even have the napkin that I wrote everything on.”

As a scientist, Marignani is obsessed with “the nitty gritty of disease,” specifically the genes and proteins responsible for both disease and the human cell’s extremely complex communication network. Every cell in our body has 20,000-23,000 genes, and each gene makes between one and a dozen proteins, so every cell contains hundreds of thousands of proteins. “Every cell of our bodies is just bursting with all these different proteins communicating,” she says, comparing it to a telephone network. Marignani says thinking about the complexity of the human cell keeps her up at night. “The fact that the majority of human beings are walking around healthy is mind blowing.”

And so when something goes wrong in that system, it’s a “huge task” to figure it out. But that’s Marignani’s job. Her lab, the Marignani Discovery Research Laboratory, is dedicated to tumour-suppressing proteins, particularly one called LKB1. In 2014, her lab discovered that LKB1 was silenced (not working) in HER2-positive breast cancer, which makes up one third of breast cancer cases in Canada. That discovery led to an experiment: In the lab they re-engineered the DNA of mice to develop HER2-positive breast cancer with silenced LKB1. And then they created two targeted therapies that stopped tumour growth in the mice.

Fast forward to now, and Marignani’s lab has received a $250,000 grant from the Breast Cancer Society of Canada to embark on a precision oncology research project—one she hopes will “change the narrative for cancer.” Now the lab will be studying HER2-positive breast cancer in human cells. HER2 is a protein that’s found throughout the body, including breast tissue, and breast cancer is HER2-positive when there’s an abundance of it. This type of breast cancer frequently returns. “It’s very aggressive,” Marignani says. The goal of the project is to find biomarkers that make the cancer come back, which could eventually lead to treatments that target those markers specifically.

Marignani and her team are using a new technology called single-cell RNA sequencing, which she says will “interrogate deeply into the breast cancers” on a molecular level. Her lab was the first in Atlantic Canada to use this tech in 2018. The process begins in the wet lab, where scientists put tubes of HER2-positve breast cancer cells in a machine that spits out terabytes worth of genetic sequences. The data moves over to the dry lab—computers—where the team will use machine learning and informatics to create an algorithm that will help them find genes or proteins responsible for cancer recurrence. If they find those genes, the next step is to find a way to target them directly: re-engineer mice with that specific gene and perform drug studies on them, and then move on to human studies. But first, “we're trying to find the needle in the haystack—or needles—probably a few,” Marignani says. The funding gives the lab three years to look for these biomarker needles in the haystack, which she believes is feasible. Work begins at the end of August.

This research is part of a field called precision medicine (or precision oncology), which has been around for less than a decade. The aim is to develop targeted therapies for cancers, as opposed to non-specific treatments, which “offers an incredible amount of hope to patients and their families,” Marignani says.

“We manage heart disease, we manage diabetes, we manage various cardiovascular diseases. We manage all sorts of things. So why can't we manage cancer? It doesn't always have to end in death,” she says. “Growing up in the ‘80s or the ‘90s, people were actually dying at high rates of their cancers. Now people are surviving, and they're living, and they're thriving.”

According to the Breast Cancer Society of Canada, 27,400 women in Canada are diagnosed with breast cancer each year, and every year 5,100 will die from it. That’s 75 diagnoses a day and 14 deaths.

“Today while you and I are talking, there's a woman walking out of the clinic across the street who just was told she had breast cancer. I want that woman to know she's got another 50 years,” Marignani says. “If she's a 45-year-old woman, I want her to know that there's scientists like myself working so that she makes it to 90.”