Halifax museums and galleries are full-to-bursting this season.

RAW Photography
Revealing Narratives at the Art Gallery of Nova Scotia is one of the season's buzziest gallery shows.

It’s high season for beaches and movies, sure, but don’t forget there’s lots to see in galleries all over Halifax this summer. Bask in the beauty of the great indoors while broadening your mind and heart, thanks to these seven must-see shows :


The World of Yousuf Karsh: A Private Essence at Pier 21

While the Canadian Museum of Immigration at Pier 21 is, logically, tourist central all summer, this photographic exhibition is a case for locals to make the trek to the waterfront, too: Yousuf Karsh was the type of portrait photographer who didn’t just capture faces, but also the times and places they evoked. These 100 black-and-white snaps of some of the 20th century’s brightest luminaries—Portia White, Nelson Mandela and Earnest Hemingway, to name a few—show Karsh’s ability to make even the lines and contours of history’s most known faces feel as intimate as a hand-drawn map.


Revealing Narratives at The Art Gallery of Nova Scotia

If the name Stan Douglas isn’t ringing any bells yet, trust the chime will come soon: His 30-year-deep resume includes commissions from New York’s Empire State Development and the honour of representing Canada at this year’s 59th Venice Biennale. Halifax, then, gets to bask in the glow of a legendary talent as the exhibit Revealing Narratives takes over the lower level of the Art Gallery of Nova Scotia. The large-scale photos aren’t just snapped by Douglas: He stages them like one-scene micro-movies, complete with dramatic lighting, era-appropriate costumes and a mix of CG imagery. In the finished photos, a people’s history (a recounting of events from the everyperson’s point of view, not that of those in charge) is captured and considered: A new angle on true events, drawing parallels that’ll spin in the viewer’s head for days.

Since it takes a car to get to Nova Scotia’s dark sky preserve (located in Kejimkujik National Park), and since winter is really the best time to go stargazing anyhow, artist Kristine Richer has your back with a showcase of night sky snaps so good they won NASA’s prestigious Astronomical Photo of the Day competition—twice. Here, in her first solo show, the artist invites viewers to slow down and consider: “At night, away from the ‘whisper’ of the city glow, I find myself humbled. The dark is no longer in obscurity and there is light in that darkness. This sweeping light reveals a connection to something outside our domesticity, something big, something remarkable, something unknown,” Richer says in her artist’s statement. “I become an explorer, mapping the vast splendour of the cosmos. The relationship between the earthly terrain and nightscape creates a narrative of our natural home in the boundless universe.”


To Be Free, Everything You Most Hate and Fear at The Blue Building

Lucie Chan must have a heck of a time fitting all the facets of her work into the limited characters of a social media bio: The Guyana-born artist’s practice involves multiple mediums (though she’s best-known for her large-scale installation drawings) and she often interviews her subjects to draw deep connections between seemingly unrelated topics—much as an anthropologist or even a journalist might. Here, Chan showcases a series of works that includes drawings, photographs, videos, found materials, an audio recording, and more. Thematically, To Be Free tackles Chan’s curiosity about how the experiences of people of colour, specifically Black people, differ and are intertwined. “Chan brings together many explorations of how race has been represented, misconstrued and reclaimed, framing all with a set of questions,” the gallery adds in a release. “How close can we get to understanding the complexities of experiences that are different from our own? How are those who experience oppression remembered and interpreted? How do we carry forward these questions in relation to identity and commodity?” 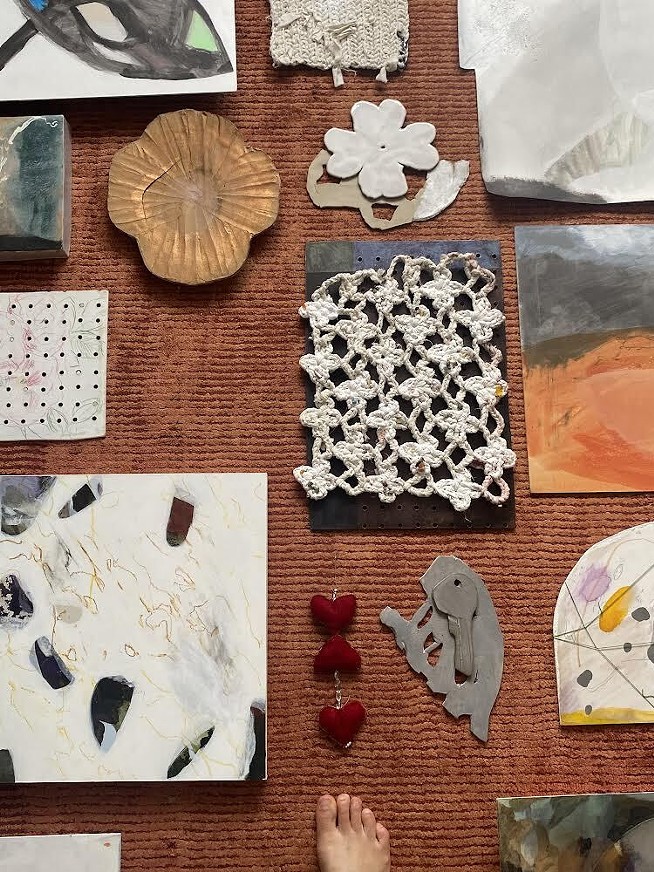 Licking the dream at The Khyber Centre for The Arts

A solo exhibition of all-new works awaits at The Khyber. Licking the dream sees artist Cadence Planthara examine grief, power, agency, inheritance, and identity through an installation showcase, musing in their artist’s statement: “My hope is that sharing this oblique, poetic work with others will be generative somehow—of further conversations, relationships, connection, healing?”

In Billy Ray Belcourt’s international smash-hit memoir A History of my Brief Body, the award-winning poet describes being an Indigenous person in so-called Canada as the experience of living inside a museum—and how he hopes his memoir will climb this museum’s walls so that the scene can be viewed from the ceiling. While viewers interact with the sprawling exhibit TK with feet firmly on the ground, the wish for subversion in the name of truth feels similarly achieved. The exhibit takes up roughly half the ground floor of the Maritime Museum, a multimedia exploration into the history of Mi’kmaw people and their connection to the water and land of their ancestral home, Mi'kma'ki. Traversing time immemorial to the recent past (the pandemic-era violence against Sipekne'katik First Nation’s rights-based fishery is included), it weaves art, interviews, and historical record to illuminate and celebrate these first peoples.


Lived in room: Objects frozen in time at the Mary E. Black Gallery

Multidisciplinary artist Camila Salcedo returns to Halifax after some time away for this show, which sees her and fellow artist/collaborator denirée isabel (who create work together under the name Comrades) consider how immigration cleaves a life into a before and after.

The complex, problematic relationship between migration and assimilation is studied through a mix of atmospheric elements (think scents and sounds) and handcrafts that recount the personal history of various Canadian newcomers.