This summer’s hottest BBQ item is also the most budget-friendly.

Josh Pereira
Cheap, satisfying and infinitely versatile, there’s a good reason that the humble hot dog holds a place of honour at so many summer cookouts.

Every year around this time, I start to crave a hot dog. For me, the perfect dog is the classic all-beef frankfurter, grilled to a blistery brown and black mottle, topped with yellow mustard and relish, and served on a soft, sweet bun. Along with drinks on patios, games of bocce in the park and lazy days at the beach, it’s one of those simple summer pleasures that I look forward to all year long.

I’m far from the only one afflicted by this seasonal desire, it turns out. Last August, Alison Roman, cookbook author and host of the YouTube cooking show Home Movies, outed herself as a major hot dog fan with a full episode dedicated to throwing herself a hot dog-themed birthday party. Naturally, I was delighted to discover the concept of the hot dog party, which is as simple and appealing as the dish itself: assemble a bunch of hot dogs, a few tasty sides and all of your favourite toppings, fire up the grill and let your guests build the dogs of their dreams.

“Even if you just add mustard and serve with a glass of cold beer or seltzer, it’s very difficult not to experience a lift when dinner’s a dog,” wrote Sam Sifton in a recent edition of the New York Times’ popular Cooking newsletter. “Griddle them crisp, toast the buns and serve with whatever toppings or condiments spark joy,” he continues, suggesting chopped pickles, jalapeños, spicy coleslaw and pico de gallo as favourite toppings among his recipe tester peers.

Cheap, satisfying and infinitely versatile, there’s a good reason that the humble hot dog holds a place of honour at so many summer cookouts–hot dog-themed or not. Not only is it relatively foolproof to prepare and assemble, but the hot dog (or veggie dog or sausage) also lends itself to a wide array of interpretations, from the classic trinity of ketchup-mustard-relish to more avant-garde creations involving everything from chilli and cheddar cheese to shredded nori and sweet mayo. For further inspiration and pro tips, I consulted some of Halifax’s most qualified experts for their essential toppings and sides. 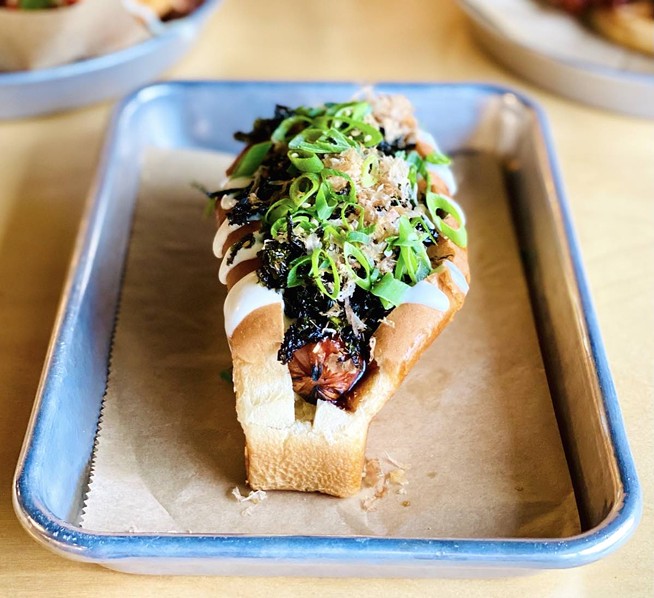 Submitted
Side Hustle did a dashi dog for Burger Bash one year, loading on dashi aioli, katsu BBQ sauce, nori, bonito and green onions for the wiener win.

Kathy Jollimore, Side Hustle Snack Bar
“We all grew up having hot dogs as kids any time there was a school carnival or anything like that, so I think people love hot dogs because they’re nostalgic,” says Jollimore, who recently featured a Szechuan-inspired dog topped with spicy dan dan sauce at her Dartmouth eatery. Outside the restaurant, however, she prefers to keep things simpler. “My husband is from Montreal so my favourite is the classic Montreal steamy,” she says. “Steamed bun, steamed hot dog, mustard, relish and no ketchup.” On the side? “Chips and dip, a green salad, and roasted potato salad with maple balsamic dressing, fresh basil and parmesan,” Jollimore says.
21 Portland Street, @sidehustlesnackbar

Crystal Kelbrat, Brothers Meats
While it may be best known for the pepperoni, this third-generation Polish deli makes a mean sausage, too. For your next cookout, owner Crystal Kelbrat recommends house-smoked Oktoberfest or Knackwurst, which come pre-cooked but still grill up nicely. “Oktoberfest mustard, honey mustard or hot mustard, depending on what you like, and sauerkraut,” Kelbrat says of the best way to dress Brothers’ links. “If we’re having a barbecue we’ll also have bigos, a Polish stew with cabbage, tomatoes and smoked pork, and cucumber salad with lots of dill and sour cream.”
2665 Agricola Street, @brothersmeats

Frédéric Tandy, Ratinaud
The French may have invented cassoulet, but come summer they love a barbecued sausage as much as anyone, says Tandy, who makes half a dozen varieties of fresh sausages at his north end charcuterie. For an authentic French take on the hot dog party, he suggests a selection of Toulouse, merguez and fennel sausages grilled and served with mustard (dijon, of course), ketchup and confit peppers and onions. “In the summer we do that a lot, with a salad on the side and grilled vegetables like zucchini, tomatoes and eggplant, just to keep things light.”
2157 Gottingen Street, @ratinaudhfx

Claire Parusch, Peggy’s Dogs
“It’s one of life’s simple pleasures, isn’t it?” says Parusch, the owner of Peggy’s Dogs, a seasonal hot dog cart on the Peggys Cove waterfront. “There’s just something so nice about sitting outside in the sunshine and eating a hot dog by the sea.” Parusch’s selection of all-beef franks, sausages and veggie dogs are popular with the cruise ship crowd, who dress them in a selection of toppings including BBQ sauce, hot sauce and pickled banana peppers. The limitations of cooking on a cart prevent her from experimenting too much, Parusch says, but she’d love to serve a chilli and cheese dog, as well as more exotic flavour combinations like a Greek-style dog topped with tomatoes, olives and feta cheese, or a Thai creation with sweet and spicy mango salad.
Lobster Lane, Peggys Cove, 902-482-0941