The school has applied for a demolition permit, while area residents are seeking heritage designation.

The Coast
"The building is not in liveable condition," Dal says of the house it bought at 1245 Edward Street.

Dalhousie University is growing. Enrolment numbers for Atlantic Canada's largest university totalled nearly 22,000 students at the end of 2021, and have been increasing by at least 500 students annually for the past five years. Dalhousie is also expanding as a real estate developer, particularly around its Studley campus in south end Halifax.

Last year, Dal’s main campus was overtaken by the construction of the newly expanded $38.5 million Arts Centre on Seymour Street, which is set to be unveiled this fall. Currently, the school is working on plans for a brand new Event Centre—an NHL-sized rink with changing rooms and 1,000 spectator seats, as well as space for food services and the Dalhousie Physiotherapy Clinic to move in. The LeMarchant Street building will mean the demolition of the current Dalhousie tennis courts on South Street to make room for parking, as well as reconfiguration of the Alumni Crescent driveway slated to happen by summer 2022, but there is no projected completion date or budget for the project.

These two projects are substantial, but Dalhousie hasn’t stopped there. In the past year, the university has purchased at least three houses around campus: 1245 Edward Street, and two buildings beside each other at 1231 and 1239 Henry Street.

“The university has really expanded and encroached. They’re buying up these homes as soon as they come on the market, grabbing them,” says Peggy Walt, a member of the University Neighbourhood Association who lives on Edward Street. She knew the previous owner of 1245 Edward Street, Susan Sapp. Sapp raised her seven children in the house and rented rooms out to student boarders, but after she passed away last year, Dalhousie purchased it for $1 million, according to Viewpoint.ca.

According to Dal, the green-sided house is in a state of disrepair. The university has applied for a demolition permit as of May 2.

The home “is not suitable for the housing needs of our community. The building is not in liveable condition, with significant water damage, mould, and holes in the ceilings and floors,” says Dalhousie’s associate director of media relations and issues management, Janet Bryson, in a statement on behalf of the school. However, “during the demolition, if safe and feasible, efforts will be made to salvage fixtures of characteristic quality.”

Once torn down, there are no immediate plans to build something in its place, but there are presumably lots of options available, considering the school also owns the Glengarry Apartment building directly next door on Edward. As for the Henry Street properties one block over, which Dal bought in January for $3 million, they are currently student housing with no plans for demolition. But “in the future these locations may provide potential for expansion opportunities, including housing,” Bryson says of the three properties. As part of its strategic plan, the school says it will “include public consultation as part of the discussions regarding direction, principles, and ideas for the evolution of the campus.” 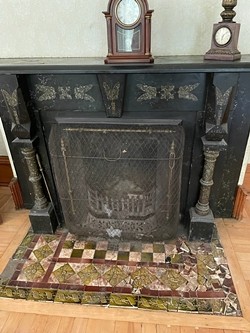 Peggy Walt
1245 Edward shows its Victorian character with this fireplace…

Walt says she managed to tour the Edward Street home on the day of an estate sale last summer and take photos of “the gorgeous staircase, the fireplace, all the moldings and everything.” She dug more into the history of the home, which was built circa 1897 according to city directories, and has elements common of the late Victorian era, like balloon framing, bay windows and a veranda.

From 1914 until 1956, the home was owned by Alexander R. Hobrecker, son of the builder of the Oland Mansion on Young Avenue. His daughter, Doris Hobrecker, was married at the home in the 1930s, and more recently her son David Schurman—Alexander Hobrecker’s grandson—sent an email to Dalhousie that argues tearing down the Edward Street home “would, in effect, totally change the area. And I, and my relatives in the Halifax area, are quite upset by the fact that their old heritage home is being demolished.”

Peggy Walt
…and the piano tucked under the ornate staircase.

William Breckenridge, a local historian, drafted a Heritage Registration Application that was submitted to HRM on May 10. Meanwhile, Peggy Walt has planned a rally for Thursday, May 12 at 12 noon outside the home, and started a petition online that has nearly 3,000 signatures.

But unless the heritage application is approved quickly, the house could come down any time. Every morning, Walt looks out her window. “I wake up and I’m worried. Is it still there?” she says. With the university buying houses on what feels like all sides, she feels like the remaining homeowners are “the meat in a Dalhousie sandwich.”