Finally, someone wrote the must-read book on Maud Lewis's artwork | The Coast Halifax

Over 15 titles explore the folk artist's life—but Laurie Dalton's Painted Worlds: The Art of Maud Lewis, A Critical Perspective puts the emphasis back on the paintings.

Why don't Andy Warhol and Claude Monet get critical demerit points for revisiting an idea the way Maud Lewis often does?

There are north of 15 books on Nova Scotia folk artist Maud Lewis, from coffee table tomes to children’s books teaching counting via the repeated iconography of her paintings. Many focus on her biography, hitting the familiar notes of her late-life marriage and her solitary youth in Yarmouth. There’s even a niche-y, deep-dive into how the Art Gallery of Nova Scotia preserved and restored Lewis’s famous painted house. Almost all of these books are written by the same couple of authors (mostly men), sanding and smoothing the timber of your mental image of Marshalltown, Nova Scotia’s most famous woman. But amidst all these dozens of books and hundreds of pages, there’s something almost completely, suspiciously absent from the conversation: The discussion and dissection of Lewis’s work itself.

Finally, art historian and curator Laurie Dalton is here to change all that. She’s proving that yes, in fact, we do need another book about our province’s most famous artist: Hers, titled Painted Worlds: The Art of Maud Lewis, A Critical Perspective.

Nimbus publishing
Paintings like this one, of a school in Bear River, show Lewis's "mastery of colour," says Dalton.

Dalton’s fascination with Lewis runs deep—both lived in the Fundy Shore area and Dalton wrote a thesis on Lewis in 2003—but “a thing I found extremely frustrating was the lack of really looking at her paintings as objects of art,” she begins, speaking by phone with The Coast from the Annapolis Valley, where, in 2018, the curator staged one of the largest solo shows of the artist’s work since 1997. “I felt that a lot of the narration and a lot of the storytelling around her centered around…her tiny house; [Lewis] as an example of the rural poor; as an example of Nova Scotia folk,” Dalton lists. “I felt that it sometimes lacks a deeper understanding of looking at her paintings as objects of art and also situating them within art history—within the language of cultural history.”

Dalton notes that auction prices for a Lewis original are at an all-time high, and that the artist’s profile is still benefiting from the 2016 biopic Maudie—meaning there’s no better time to ask why, though Lewis’s work is one of the country’s most recognized, it is routinely absent from serious considerations of Canadian art. “What drives the mania and interest in her?” Dalton begins. “It's not accidental that when they're trying to market the province, they're using Maud Lewis. There's all these different kinds of factors in laying claim to her.”

But if the tide of Lewis mania has never been higher, the direction of the water is also switching: Award-winning Halifax author Carol Bruneau cracked the candy coating of the Maud of our minds with her 2020 novel Brighten The Corner Where You Are, delivering a portrait of a chain-smoking, self-reliant survivor—using fiction to make the realest portrait of the artist yet. Now, Dalton’s book offers the same fresh perspective to Lewis’s work. “This book was hopefully trying to situate her as an artist and not a malleable product,” she says. 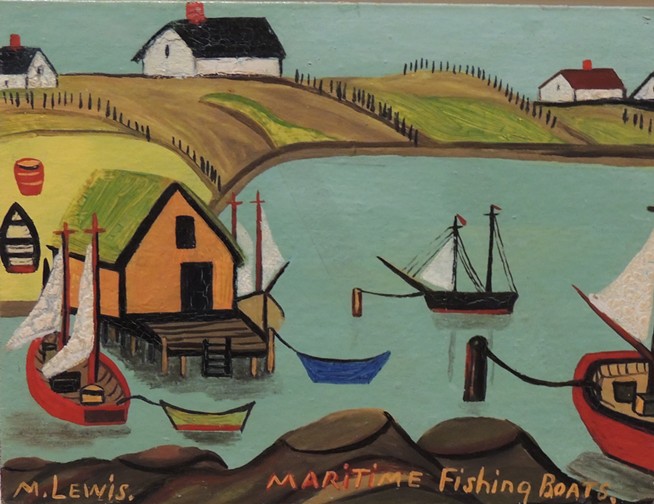 Nimbus publishing
This Lewis landscape shows the artist was capturing not just the scene but its mood and essence—something that puts her in league with other modern artists.

Painted Worlds frames Lewis’s work by discussing technique and colour theory. It compares Lewis’s use of repetition to other famous artists known for repeating motifs—asking why Andy Warhol and Claude Monet don’t get demerit points for revisiting an idea the way Lewis often does. The full-colour book shares advertisements and ephemera (like vintage MacLean’s covers) that likely inspired the artist. This isn’t ethnographic study or an act of rural Nova Scotian anthropology. It is seeing Lewis for the artist she always was, at last—and you need never have taken an art history class to get the lesson.

“Some of her paintings…don’t just evoke the landscape of Nova Scotia, but the essence and the mood. I think of it as going, ‘No, she's actually in this area—and capturing that kind of essence.’ And that's another key thing I talked about in the book: A lot of modern artists, when they were painting the landscape, were really interested in capturing the mood and the energy and the essence and the experience of landscapes,” Dalton adds, comparing Lewis’s landscapes to those of Emily Carr. “And I think if you spend a bit of time, not just quickly looking at a Maud Lewis painting, I think she captures that dynamism of those landscapes as well.”