The province is giving Clayton Developments $21.8 million to hold rents between 60 and 80 percent of full market rates for 20 years. 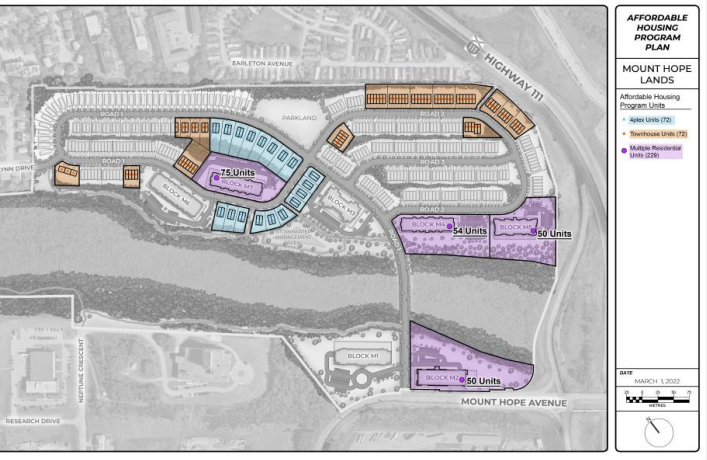 Communications NS
The Mount Hope area of Dartmouth will see 875 new units, 373 of which will be “affordable.”

“As we all know, the housing issue has reached a critical point in Nova Scotia. Our province is growing rapidly,” Lohr told reporters. “The supply of available housing needs to keep pace, particularly in HRM.”

The province is also giving $2.3 million to the municipality to help with various studies—environmental, land-use suitability, transportation and infrastructure—related to the process of building new neighbourhoods, but the minister said the province would assume authority for development approvals under the Housing in HRM Act. “The developers will continue to work with HRM planning,” said Lohr on Friday. “And will be subject to required permitting fees and regulatory requirements as specified within the Act,” including height requirements, setbacks and public consultation processes.

But don’t mistake that intervention for the government building, owning or setting prices for the 22,600 units. That will be done by the six development corporations that are behind the projects. The name that shows up most frequently in the documents is Clayton Developments Inc, with six projects. Crombie REIT and A.J. Legrow Holdings will partner with Clayton on one project each, and the remaining three will be overseen by Armco Capital, Dartmouth East Holdings (Cresco Construction) and Dartmouth Crossing Ltd.

The announcement supersedes municipal government decisions, including the Northwest Community Council’s recent attempt to limit the growth of Indigo Shores to 25 lots per year. The province says the newly-developed HRM Housing Task Force considered 41 potential sites from 31 developers and consulted with “industry representatives and community agencies” to decide on these nine, which were already in planning stages.

“Port Wallace has been in the process since 2014, and the province has been working collaboratively with HRM since then, but they still had hurdles to meet the final steps,” said Lohr Friday. “The $2.3 million will help with get through those hurdles. In some cases it’ll be months taken off and in some cases it will be years we speed the process along.”

Speeding things along is clearly important to the province, which says the “housing deficit” in Halifax is currently at least 17,000 units. And that number will surely grow by the time the last of the nine projects gets underway in 2024. However, the government hasn’t announced any deadlines for construction to be completed.

Halifax’s Ecology Action Centre says the speedy announcement overlooks the fact that Sandy Lake, which is set to have 6,000 units, is currently a mostly undeveloped old-growth forest. One of the Bedford West locations is also bordering the Blue-Mountain Birch Cove wilderness corridor and the Southdale location is near the Eisner Cove Wetland.

Kortney Dunsby, sustainable cities coordinator with the EAC, says she’s “concerned that these new developments will not require public input or consider existing priority plans, such as the Halifax Green Network Plan and Integrated Mobility Plan.”

On Monday, March 28, minister Lohr made two more housing announcements. One was about the province and the federal government jointly giving a total of $916,000 to community housing organizations like the YWCA, the Preston Area Housing Fund, Alice Housing and the Affordable Housing Association of Nova Scotia. “They know their communities well, and they know how best to meet their needs,” Lohr said via press release. “We are pleased to support these organizations and help them build strength and expertise for the work ahead.”

The other announcement was substantially larger, nearly $22 million, and related directly to Friday’s 22,600 units. Lohr made it with Clayton Developments vice president Kevin Neatt at his side. Out of the 875 units that will be built at the Mount Hope site, Clayton has committed to providing 373 “affordable” units. The developer will receive a “forgivable loan” of $21.8 million—forgiven if the units are kept affordable for 20 years.

“This project will produce more affordable housing units than all our programs have produced in the last three years combined,” Lohr said Monday. “We expect construction to begin in the fall with new units expecting to become available about a year after that.”

That nearly $22 million works out to a government subsidy of about $2,700 per unit per year. The affordable Mount Hope units will be renting for between 60 and 80 percent of the current market rate; a provincial press release says rent “could be as low as” $605 for a one-bedroom apartment and $788 for a two-bedroom.

Doing the math, those rent figures must assume the monthly market rate is $1,008 for the one-bedroom and $1,313 for the two-bedroom, and the affordable rent is just 60 percent of the market rate. (These rates are close to, but below, the Canada Mortgage and Housing Corporation’s data for Halifax. The CMHC’s latest rental market report, which came out in February with data from the fall, says a one-bedroom was $1,084 and a two-bedroom was $1,335 in October.)

At the high end of the government’s range, affordable rent could be fully 80 percent of the market rate. And projecting forward to an approximate building completion date of October 2024, using the same increases CMHC reported from 2020 to 2021, the market rent would be $1,234 for a one-bedroom, $1,511 for a two-bedroom. The math with these figures works out to affordable rent of $987 for a one-bedroom and $1,209 for a two-bedroom, more than 50 percent higher than the rates touted by the province yesterday.

The minister said people who can’t afford the “affordable” price can apply for a provincial rent supplement, which is currently averaging $350 monthly. But Lohr didn’t commit to further expanding the rent supplement program, which currently helps 4,700 tenants a month. It was most recently expanded by 425 in October 2021.

“Affordability depends on every Nova Scotians individual circumstances. Many Nova Scotians, even those who earn a good wage, are struggling to find a place to live with rent they can afford,” says Lohr. “The answer to the housing crisis we are facing is increasing the overall housing supply, as well as the number of affordable units. Mount Hope Project offers both.”

Although the units in the Mount Hope development—which will be a mix of duplexes, fourplexes, townhouses and apartments—will be permanently owned by Clayton Developments, Lohr says some units in other special planning areas will be sold off. “Certainly I know that one of the main ways to get ahead in life is owning your own home and to invest in that,” he says. “So I’m very concerned about home ownership being attainable also.”

On January 11 of this year, the provincial government’s Affordable Housing Commission published a progress report. In its press release announcing the report, the province said 45,100 Nova Scotia households are in “core housing need.”