From poetry to prose, bios to comics, fantasy to tales of dysfunction.

By Shannon Fay and Jaime Forsythe 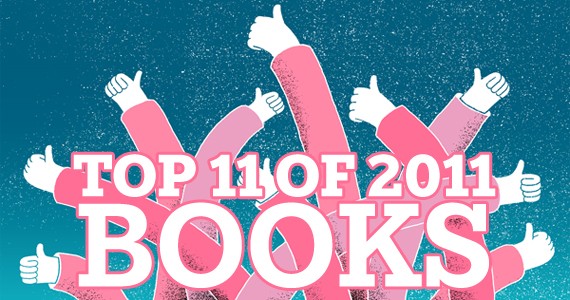 By Malachai Nicolle and Ethan Nicolle

Axe Cop is a webcomic created by two brothers---older brother Ethan does the artwork while five-year-old Malachai comes up with the story. It's random but entertaining, like an innocent version of Robot Chicken.

By Tsugumi Ohba and Takeshi Obata

Ever wondered how the comic-book industry in Japan works? Don't care? You will after reading Bakuman, a series about two high schoolers trying to break into the manga industry.

By Gabriel Ba and Fabio Moon

By Brian Wood and Becky Cloonan

A collection of stand-alone stories, Demo looks at people with ordinary problems (ie lack of confidence, shyness) that manifest in extraordinary ways (ie eating people). Not always a happy read but still gripping.

With Habibi, Craig Thompson returns to two of his favourite subjects: love and religion. It's been seven years since Thompson last released a book, but his simply beautiful artwork is always worth the wait.

By Nick Spencer and Joe Eisma

By Cullen Bunn and Brian Hutt

Wandering Son is a relaxed, down-to-earth series about two transgender elementary school children. It's simple artwork and slow pacing makes the series that much more affecting.

Shannon has worked in a bookstore, on farms and in a youth hostel in Amsterdam. Surprisingly, it was in the bookstore where she cleaned up the most bodily fluids. She also reviews manga for kuriousity.ca.

This debut novel is best devoured next to a woodstove in a snowstorm, as it conjures chilly, lovely images of loss, wilderness, weather and a chain of siblings christened after a fleet of ships.

The Antagonist (House of Anansi)

From the 1999 Swissair crash in St. Margaret's Bay to Toronto's suburban sprawl, Mooney is a tour guide with a magnifying glass, investigating notions of community from a host of compelling angles.

Goyette asks us to consider our relationships to one another, to our environment, and to language in this piercing, big-hearted collection. The sky has fallen, but the poet is in.

Characters experiment with modern dating, have unsmiling babies, find their heads detaching from their bodies and negotiate physical pain and illness. These short stories are gutsy, elegant, dark and funny.

Kraatz's eye for the perfectly placed detail lights up these poetic vignettes of life in the 1940s. Her drawings transport the reader to an imaginative world full of style, heartbreak and humour.

Jaime has a diabetic cat and can identify any type of sashimi with her bare eyes.

A Description of the Blazing World (Freehand) By Michael Murphy

Easy to Like (House of Anansi) By Edward Riche

The Great Leader (House of Anansi) By Jim Harrison

The second in a trilogy of Harry Potter meets Reality Bites but with more drugs and a surlier anti-hero who can't seem to find the magic in real life.

Not Being on a Boat (Freehand) By Esmé Claire Keith

Starring the one percent as they take their retirement in style on a luxury life-cruise during what appears to be a political apocalypse. Mr. Rutledge: You'll love to hate him.

The O'Briens (House of Anansi) By Peter Behrens

A rolling epic that spans generations of a family as they attempt to live the Canadian dream. Chock full of meaty secrets and betrayal, the dysfunctional O'Briens will adopt you.

Unspent Love, or, Things I Wish I Told You (Conundrum) By Shannon Gerard

A beautiful collection of poems and hand drawn images that are somehow both heartbreaking and hopeful in equal measure. Read slowly with a cup of tea and savour every moment.

As if growing up wasn't weird enough, try doing it on a failing commune. Darkly comic and at times unnerving, siblings Kate and Albert cope with their version of normal.

Lindsay is named after two separate and unrelated natural disasters. Won a trip for four to Macchu Picchu under a 7UP bottle cap once, but it was expired.