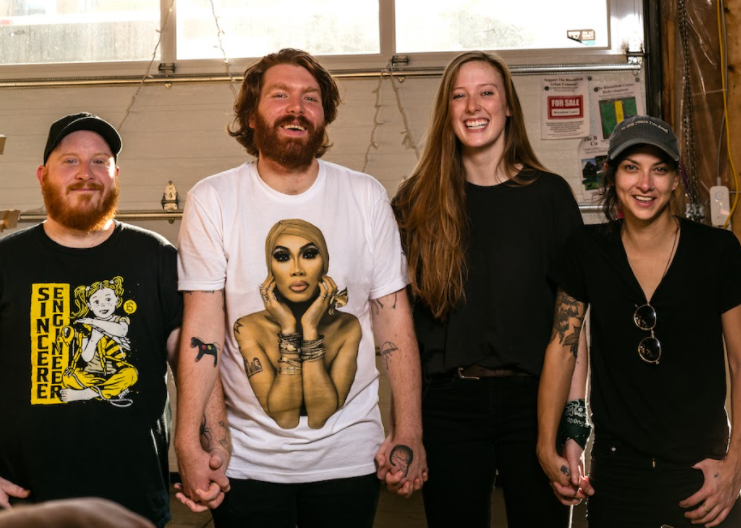 There was no Warped Tour in 2021, even though pop-punk’s pulse rattled loudly enough for the first time in a decade to warrant its snot-nosed, guitar-thrashing return—as evidenced from WILLOW’s Travis Barker-christened Lately I Feel Everything to the global dominance of Olivia Rodrigo’s Sour. A local ripple of the trend’s cresting wave? Halifax’s No, It’s Fine. has finally dropped its debut LP of originals, the 12-track I Promise—something fans have been waiting to come ashore since the band became a staple at Gus’ Pub in 2018.

The resonating wit of No, It’s Fine.: Cailen Pygott’s honest and funny indie rock makes this a band to follow.

Inspired by Modern Baseball—and for fans of MB, Spraynard and The Wonder Years—No, It’s Fine. bills itself as a post-emo-pop-punk act. But that categorization leaves out the its innate sense of self-deprecating irony, a passive-aggressive name that crunches into overtly forthright lyrics.

I Promise. is the band’s second release of 2021, following its live-from-the-floor cover collection, (It’s Nice to Pretend) We Wrote These Songs. “We were both like ‘How do we make this an honest distillation of our relationship to these songs?’” Cailen Pygott, the band’s frontperson, told The Coast at the time.

I Promise. picks up sonically where (It’s Nice to Pretend) left off—a study of influences like Silver Jews and Weakened Friends so complete, it at times feels like the four-piece standing in the shadows of its own beloved giants.

At its best (which it often is), the album’s sense of fun is palpable, the energy so high it feels like you’re sitting in on BFFs at a particularly tight, polished band practice. Pygott’s acerbic lyrics are levelled at himself as easily as others (“No one likes a Pisces who can’t help themselves”), breaking the problematic pop-punk tradition of lyrical hit jobs on ex-girlfriends that caused legendary music critic Jessica Hopper to write the seminal essay “Where The Girls Aren’t.”

You can judge a song by its cover: The music industry cover song trend arrives in Halifax—but maybe that’s not the worst thing ever.

Pygott’s duetting with Nova Scotia Music Week musician of the year winner Tori Cameron makes his run-on punchlines hit harder, bordering closer to dialogue than lyrics. Chris Wilson’s drums are the full-stop periods Pygott loves so much, creating a lurching rhythm matching the thematic unease and band’s punctuated title. KT Lamond (Like A Motorcycle) grinds the guitar into a paste that brings it all together.

Maybe Warped will return next summer, a greasy plastic altar to overthinking interactions and over-distorting guitars. For those of us who’ll find the wait long, No, It’s Fine.’s music pledges to fill the void.