City lawyer says an internal review of the August 18 housing protest is already happening and there shouldn’t be two “parallel processes.” 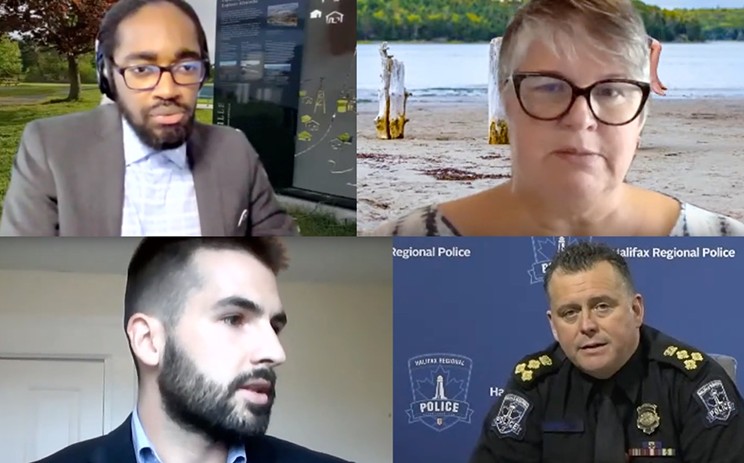 The Coast via Zoom
As seen on Zoom during the Board of Police Commissioners meeting are, clockwise from top left, chair Lindell Smith, Becky Kent, Halifax Regional Police chief Dan Kinsella and Harry Critchley.

Exactly two months after the shelter siege of August 18, Halifax’s Board of Police Commissioners met to discuss the possibility of an independent review of police actions that day. A petition calling for such a review was started by the East Coast Prison Justice Society and signed by nearly 5,000 people over the past eight weeks.

The Change.org petition says HRP’s actions on August 18 “reflect longstanding and systemic issues with policing in HRM, including the Municipality's reliance on police to address complex social needs; excessive force by police; and the militarization of the police.”

Commissioner Harry Critchley brought the official motion to the board’s virtual meeting on Monday, October 18. It calls for the board to “prepare a draft of a mandate and terms of reference for an independent civilian review of the oversight, governance, and policy aspects of the HRP’s handling of the protests on August 18.”

“I first lay out what I understand to be the legislative authority in the Police Act for such a review. I then try to provide a few examples of instances around Canada where other municipal police boards have initiated independent reviews,” said Critchley when he presented the petition at the Zoom meeting, citing examples from Alberta, British Columbia and Ontario. “And I do that mainly to illustrate that this is not a new thing.”

Commissioner Becky Kent seconded the motion. But police chief Dan Kinsella said there’s already an internal review happening looking into the conduct on that day, specifically issues like use of force and removal of name tags.

“I know that there is a complaint against the police in general for perceived issues that people have brought up and that is proceeding,” said Kinsella, with emphasis on the word perceived. “Beyond that, I wouldn’t be able to discuss too much more.”

However, many of those findings would only be released internally, not to the public, and the very existence of the petition demonstrates public desire to understand how the Aug 18 protest became a violent police action with pepper spray and arrests. Critchley also said the petition requested an entirely different review process.

“The subject line of the motion reads ‘for an independent civilian review of the oversight, governance, and policy aspects of the handling of the protests,’” said Critchley. “The oversight, governance, and policy aspects are what the board deals with, that’s the authority of the board. I want to be very clear that I’m not intending or requesting that we duplicate or even supplement the process that is ongoing.”

Halifax’s municipal lawyer, Marty Ward, had concerns an independent review was outside the board’s jurisdiction to do, and with “having parallel processes operating.”

If the complainant in the first review isn’t satisfied, Ward said maybe there could be another review by the Police Review Board. But right now, that process is still happening.

In the end, Critchley suggested that the board seek independent legal advice, and north end Halifax councillor Lindell Smith, who also acts as chair of the board, agreed. “This could be seen as a friendly [amendment],” Smith told Critchley. “Because it doesn’t interfere with what you asked earlier.”

The amended motion—asking for a staff report and outside legal opinion about an independent review—passed, but there’s no timeline on either, leaving thousands of Haligonians who signed the petition waiting indefinitely for an answer to their request. Meanwhile, another type of review is also slowly moving forward, as the 24 people arrested at the protest are due to have their next court date November 4. One answer to the charges against them is that the police violated their right to assemble. If the case proceeds to trial, a judge may well rule the police were acting illegally.