With so many photos and videos from the August 18 protest shared in public, the evidence against the accused is still being gathered. 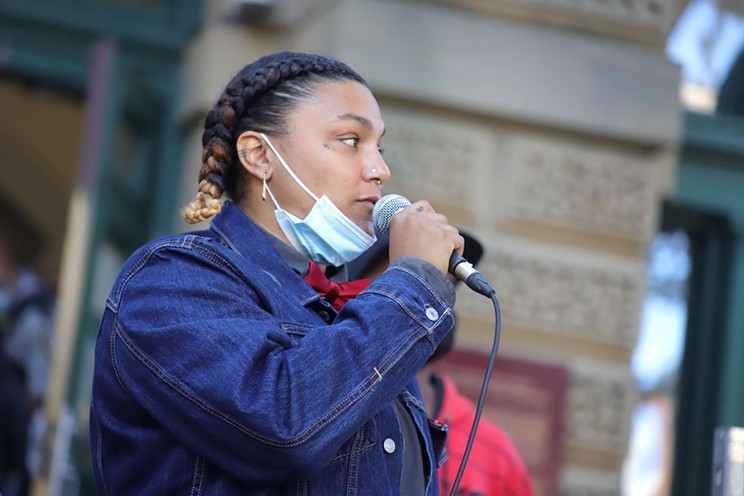 The Coast
“A lot of elders tell me that this is a long game,” says Kate MacDonald at the shelter siege protesters’ first court date; the next happens November 4.

“I’m not a hero,” says Kate MacDonald into a microphone, standing at the centre of a group gathered this morning outside the courthouse on Spring Garden Road. “Nobody here is.” But the crowd of about 50 may disagree. MacDonald and 23 others were arrested by Halifax Regional Police on August 18 for defending their unhoused neighbours during the shelter siege.

“It’s not revolutionary to be arrested, it’s exactly what’s supposed to happen,” MacDonald says, and several people cheer and clap. She’s standing just across the street from where the violent police interaction took place nearly seven weeks ago.

Dear mayor and council, you can’t blame the protesters because none of you were there: An open letter to Halifax Regional Council about the police violence last week.

“Everyone was like ‘woah y’all are so brave that you were arrested, revolutionary’,” MacDonald tells the crowd. “It’s not, for marginalized people to be arrested at an action. It’s historical, it’s systemic as well. We’ve seen this happen before.”

It’s the date of the first court appearance for those protesters, many of them BIPOC or queer, and 17 of whom are being represented by Halifax criminal defense lawyer Asaf Rashid. The charges are mainly for resisting or obstructing justice, a few are assault of a police officer and one protester is charged with general mischief.

“All these kinds of charges are quite typical in protest situations,” Rashid tells The Coast in a phone call the evening before the court appearance. “When police just wish to clear the crowd.”

Tuesday’s first court date is where the Crown is supposed to provide the disclosure—that is, to provide the accused all the documents that are relevant in the case, so the accused know the evidence and can mount a strong defence. But the Crown can also take their sweet time compiling that evidence.

“It all depends on how quick the police are in putting it together, and if the disclosure is bigger, involving photo and videos and all that,” says Rashid, it might take more time. “It’s [already been] over six weeks, so that’s a little long, but it just probably means that there’s more volume to it, that’s all.”

In this case, because the events of August 18 happened in front of hundreds of people with cameras, a lot of potential evidence has been shared publicly by media and on social media, so the Crown is taking more time, and Rashid asked to adjourn until the disclosure is ready. The next court date is set for November 4. 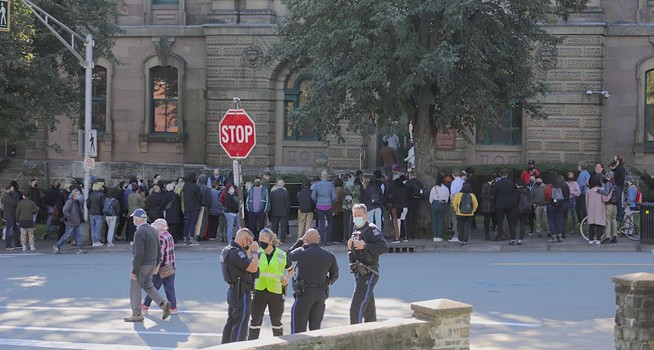 The Coast
The Spring Garden Road courthouse Tuesday morning, as seen from the old Memorial Library, where the police used pepper spray against protesters at the August 18 shelter siege.

“Basically we’re in the mechanics of the court now,” Rashid explains, standing at the bottom of the steps of the courthouse after his appearance on behalf of the clients. “We’ve just got to wait for that disclosure from the Crown in order to have the opportunity then to further the conversation on withdrawing charges or any other possibilities.”

The lawyer hopes that some of the charges could be dropped based on either police misconduct, technicalities, a lack of evidence or certain defences.

“With any criminal matter, it's possible that six months later, the charges will be withdrawn,” Rashid says. “But it doesn't mean that that person doesn't still have to deal with the slowness of the court process. There’s a whole process of waiting for that package so that any accused person can know what they're up against.”

In a statement from the arrestees read aloud on Tuesday morning, Rashid says the police were unlawful that day because they violated the protesters’ Charter rights to assemble peacefully and to freedom of expression, and therefore none of the charges should be able to stand. “The public needs to have confidence that the justice system actually works, that’s really important here,” Rashid said to those gathered.

“With the conduct of police on August 18 and in light of the violations of the right to housing, and the question of the lawfulness of police actions on that day, is it truly in the public interest for these prosecutions to proceed?”

A voice in the crowd answered, “Absolutely not, drop the charges!”

A petition with over 3,000 signatures calls for an investigation into police behaviour that day. Many signs at the courthouse also called for the protesters’ charges to be dropped, but Rashid says the letter of the law must be upheld now that cases are in front of the court system.

“I am a lawyer, and I have to realize there’s a process to this all,” he said to the crowd after emerging from the court. “So the prosecutor will need to review these issues, they’ll need to review whether there’s a real, reasonable prospect of conviction and whether there are significant public interest issues, to make a decision whether or not to proceed on the matter.”

That last point is why “it’s so important that people are here today.”

Except for Kate MacDonald, the arrestees themselves aren’t willing to go public with their names. This morning they stood silently in a line at the front of the crowd while Rashid, and others like community organizer Aaliyah Paris and NDP MLA Gary Burril, did the speaking.

After everyone had a chance to say their piece, MacDonald took the mic back. She thanked everyone for their support from August until today, but says this is likely only the beginning of a long, uphill battle.

“Your continued support is imperative, this is far from over,” she says. “A lot of elders tell me that this is a long game. So, nice to see a lot of you here for the long game.”