10 promises the Progressive Conservatives made during the election, from health care to dogs. 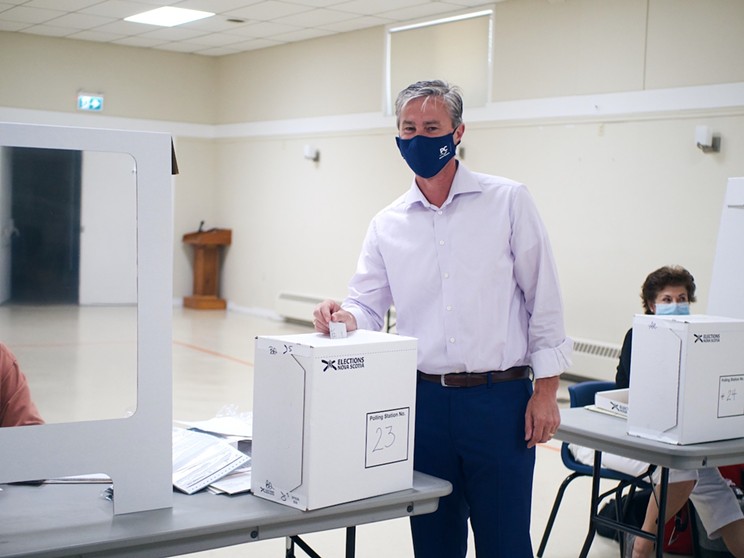 Houston, we have a majority. Premier Tim Houston (does that still sound weird? He’s technically premier-designate now) was elected on Tuesday evening, and by Wednesday morning his Progressive Conservative Party had a clear majority government with 31 of the 55 seats in Nova Scotia’s legislature. Houston wasted no time selecting a transition staff team to get him ready to take over the office being vacated by outgoing-premier Iain Rankin (just premier, technically).

The new premier and his cabinet will be sworn in Tuesday, August 31. To help you begin the mental transition to life under a PC government after eight years of Liberal rule, we’ve dissected the PC’s 12-page election platform and recent interviews to find Houston’s 10 biggest campaign promises.

Nearly 70,000 Nova Scotians need a doctor: Waiting list for a family doctor grew by more than 20,000 people in the last year.

1Dog tax credit
Probably the weirdest photo op of Houston’s campaign was when he awkwardly held a dog on August 8 and told Nova Scotians they could get a $500 tax credit for adopting a pup. Why $500? Which adoption agencies will be recognized? Why not include cats? Who knows.

2A Red Tory approach that’s to the left of other Conservatives
Nova Scotia’s Progressive Conservatives often distance themselves from the Conservative variant on display elsewhere in the country—this is the Red vs Blue Tory phenomenon. Houston himself has kicked out extremists who disagree with his moderate views, like when Elizabeth Smith-McCrossin set up the COVID border blockade. With a federal election on the way, Houston’s track record, thin as it is, says he won’t fold to toe national leader Erin O’Toole’s line. (While Smith-McCrossin’s win as an independent suggests pure Conservatives have a toehold of their own in the province.)

3“Instant” doctor access for everyone
Sound familiar? That’s because it’s basically the same promise Stephen McNeil ran on in 2013, but this time based around assigning primary care providers via tele-health. Houston says he himself doesn’t have a family doctor right now since his current one recently retired, but promises to improve doctor retention by creating a pension plan and improving physician salaries.

4Better Pay Cheque Guarantee program
The PC Party has a page on its website that says “Our economy won’t truly grow unless our workers and our middle class grow with it.” It promises a program where businesses can cut taxes by putting 50 percent of them in a fund for employees, hiring new staff or giving bonuses, but, of course, “distribution is at the discretion of their employer.”

5Running deficits “for a few years”
The Tories have said they will spend $553 million during their first year in office, pushing the provincial deficit over $1 billion and balancing the books six years down the road. To counteract this, Houston promised he will bring in a new tax for people who own property here but don’t pay income tax in Nova Scotia—$2 for every $100 in assessment value.

6Mental health help
The PC platform promises universal mental health coverage for Nova Scotians “no matter what your income or where you live.” There is no definition of how many or which services are covered, but the platform also touts tele-health counselling and referrals, and creating a 9-8-8 phone line that runs 24/7 because “in crisis, no one can remember a 10-digit phone number.”

7Adding nursing home beds
The PC platform explicitly promises to open an additional 2,500 single-room long-term care beds within the next three years, as well as hiring 2,000 “health professionals” to meet adequate staff-to-patient ratios of 4:1 and reinstating a Continuing Care Assistant training grant that was cut by the Liberal government.

8Tax credit for fertility treatment
Houston’s health care promises continue as he says tax credits of up to $20,000 will be provided for families dealing with infertility. Houston doesn’t specify whether 2SLGBTQ+ couples, who typically face even more barriers, will be covered.

980% renewable energy by 2030
The final page in the PC platform is about the environment, and the party says it will “walk the walk” by ensuring 80 percent of “electricity” will be supplied by renewable energy by 2030, and by that same year 30 percent of vehicles sold will be zero-emission. The party also promises to protect 20 percent of land and water mass by that year, and fully implement the Lahey Report recommendations for forestry practices.

10$10-a-day childcare
While this promise was first made in mid-July by the sitting Liberal government just before the election call, Houston says he won’t undo it. “I'm not interested in moving this province backward in any way,” he said on July 22 during a campaign stop. "We're not going to unwind anything. We're going to look to improve everything that's before us."

Halifax results and ridings in the 2021 Nova Scotia election: Your guide to candidates and winners for core HRM now that Tim Houston is premier.