It is only getting harder for this country to pretend to be what it claims to be. 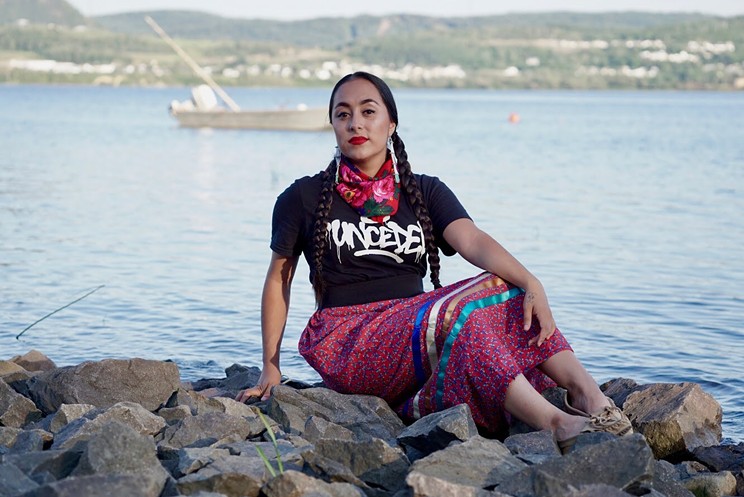 Killa Atencio is a creative entrepreneur and cultural consultant originally from Listuguj First Nation in Quebec.

Barbara Kentner. Colten Boushie. Tina Fontaine. Joyce Echaquan. Rodney Levi. Chantel Moore. These are the names of only a fraction of the Indigenous people who Canada and its systems have let down since 2015, when my first article about July 1 came out in The Coast. The magnitude of each of their names should weigh heavily on the conscience of everyone in this country because of the abhorrent injustice they exemplify. They serve as a stark reminder of why I continue to choose not to celebrate Canada Day.

When my first article was published, I received comments, which I’ve seen echoed over social media and in every comments section of news articles about Indigenous people. “Stop living in the past,” “you can’t change the past,” “don’t be so negative, be optimistic.”

The names I listed are at the centre of tragic events that have taken place throughout the last six years. That list doesn’t include the recent attack on the Mi’kmaq moderate livelihood fishery, the escalation of violence and criminalization of Wet’suwet’en land defenders, the ongoing disappearances and murders of my Indigenous sisters, the suicide epidemic that plagued northern Saskatchewan taking the lives of six Indigenous girls within a month, the children who have died in custody of the child welfare system or the girls as young as nine in foster care at risk of rape who have been forced to get IUDs instead of being provided with safer care.

Not to mention, it’s been less than a month since the remains of 215 Indigenous children were found buried on the grounds of one residential school, and since then, the count has steadily increased as more school sites are searched. Since that day, tiny children’s shoes have lined the streets and impromptu memorials have popped up all over the country, and the government has apologized for its part in what the politicians like to call “a dark chapter in Canada’s history.” However, those same politicians refuse to acknowledge that they are the ones who wrote the book, and they still have the pen in their hand. These events are recent, but they are not unique—in fact they weave the very fabric of Canadian society historically and presently.

Canada didn’t start 150 years ago: The history of this country is complex and interwoven from many countries.

While this discovery of unmarked graves may have been a painful reminder to non-Indigenous folks, to us it is just another day where we are forced to relive trauma, be inundated with ignorant and racist comments on social media and shake our heads at the reluctance of the Canadian government to do something beyond performative action. It’s paradoxical that the end of National Indigenous History Month is followed immediately after by a day celebrating the very country whose government and existence is founded on the oppression of Indigenous peoples: Canada Day.

It is getting harder for this country to pretend to be what it claims to be and hide behind its shiny pristine veneer when the colonial systems are still in place that are responsible for the inequalities that exist. Now when Canada sneers, it not only shows its teeth but also everyone and everything it’s chewed up, and the bones being found bear witness to that. Every year, I see a lot of “what was done in the past is horrible and can’t be changed BUT,” ”let’s reflect and move forward,” “let’s celebrate a brighter future,” However, there can be no “but” when there are still dozens of Indigenous communities without clean drinking water, and we cannot celebrate a brighter future when no action is being taken to ensure one.

It’s not about living in the past but recognizing that past behaviour predicts future behaviour, and I foresee Canada doing no better, even if it knows better. Everyone has a duty to do better and hold this country accountable.

Celebrating Canada Day, despite the continued injustices against Indigenous people, is like turning a blind eye to your friend's abusive partner because they’re usually nice to you. So again, I ask you, what is it you’re celebrating?

The missing, the mourned: Human stories behind Canada’s tragic epidemic of missing and murdered aboriginal people.

Every single day that I wake up honours all that I’ve overcome and is a reminder of the resilience against the historical efforts that have been taken to eradicate and assimilate my people. I am grateful for my life here, to be able to say this freely and to feel this pain, but like a good friend once told me: “just because you can take it, doesn’t mean you deserve to.”

So, we can cancel Canada day, but more importantly, we need to challenge Canada and the policies and systems in place that continue to make us repeat history, delaying the changes needed to make this country a safer, more just and better home for everyone in it.

Killa Atencio shares her voice and culture in many ways—as a poet and spoken word artist, as a visual artist and entrepreneur, and through her work at LOVE Nova Scotia, to name a few. Originally from Listuguj First Nation in Quebec, she is proud of her Mi'gmaq and Quechua ancestry. Along with her artistic expression, Killa enjoys work that contributes to youth and community development, Indigenous relations and education.