The African Nova Scotian community has mistrust of the health system, and rightly so. 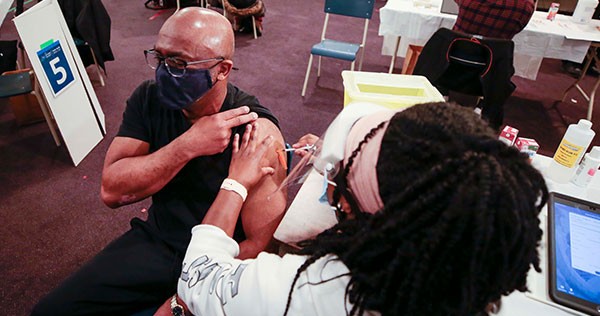 On a sunny Thursday in early April, the Emmanuel Baptist Church held the first African Nova Scotian community vaccine clinic. The large space was set up with a registration area, 10 vaccination stations and a post-vaccine waiting area. “It happened to be a really nice day, so we had some chairs outside,” says Gina Jones-Wilson, the community coordinator for the clinic on April 8 at the Upper Hammonds Plains church.

Jones-Wilson was asked to be community coordinator—given the job of calling community members over age 55 and setting them up with a time slot—because of her role as president of the community development association. “I have connections through my community work with other organizations in those communities so I was hitting up their community leads and getting the word out through that way,” she tells The Coast in a phone call the week after the clinic.

Having community coordinators like Jones-Wilson is especially important for the African Nova Scotian community because like always, representation matters.

Halifax researchers are working on three new COVID-19 vaccines, and they need help: If you’ve ever wanted to be a human guinea pig, now’s your chance.

“We understood what would make people feel better about attending a clinic, being supported by people who were very capable, who were people who reflected them in that they too were of African ancestry,” says Sharon Davis-Murdoch, the co-president and a founding member of the Health Association of African Canadians.

Having the clinic be community-led was something put forward early on by organizations like HAAC and the Association of Black Social Workers. “Our work has never ended,” says Davis-Murdoch.

David-Murdoch also stressed how much work was put in by members of the Preston community in these early stages. In a follow-up email to The Coast she says the work “was started by a group of young people who recognized that COVID was coming to their community, mobilized and made connections.”

These efforts could in fact be the reason the Nova Scotia government prioritized the African Nova Scotian community in its vaccine rollout. “Because of the work that we had started way back in March of 2020 and our consistent messages, we helped to move public health. I don’t know that we would necessarily have gotten to where we are had that work not been in place,” Davis-Murdoch adds.

But it’s not easy working to undo over 400 years of mistrust that span from enslavement in NS, through knowledge of atrocities like the Tuskegee syphilis study through to the disparities in the present day COVID-19 pandemic.

As the pandemic progressed, the focus moved to the vaccine rollout. “We knew that without any kind of culturally specific way in which we could have dialogue, address the mistrust, talk about what people’s concerns were, that the likelihood that people would go to get vaccinated would be small,” says Davis-Murdoch.

15 cases scattered over half the province April 19: Nova Scotia’s COVID-19 numbers are higher on Monday than they've been in months.

A second town hall gave information on vaccines and allowed members of the ANS community to ask questions.

“There is a lot of misinformation about the vaccine, and so with that in mind, we put on the town hall,” says doctor David Haase, a retired infectious diseases and internal medicine physician, and past co-president of HAAC. “Recognizing that for the Black communities mistrust is not just the vaccine, it’s much broader, it’s embedded in systemic racism and the way that our population has been treated or mistreated over the years.”

Haase and doctors faced questions about everything from whether the vaccine contained microchips to whether it would alter someone’s DNA. “We had doctor Gaynor Watson-Creed, the deputy chief medical officer of health, give a very nice talk about the vaccine as well and go through the different vaccines,” he tells The Coast in a Zoom call.

Meanwhile, the Association of Black Social Workers got in touch with Jones-Wilson in late March about coordinating the community clinic. She hopped on the phone and began calling her contacts and anyone over the age of 55 she knew in the Black communities of Upper Hammonds Plains, Lucasville and Cobequid Road. Another community coordinator called people in Beechville.

“It was mostly phone calls. I mean I did some posting through social media, but a lot of the older folks don’t bother too much with Facebook and that stuff, but I put it there in case the kids do,” says Jones-Wilson.

Overall, she says people were eager to get their vaccines. As April 8 rolled around, the hype in the community grew, and over 250 people turned out on the day of the clinic. “Actually we were over the amount, we couldn’t vaccine everybody, but we sent those, the ones we couldn’t vaccine to other clinics that are being opened up this week,” says Jones-Wilson.

The following week, a two-day clinic was held in North Preston township on April 13 and 14. Another 350 people were vaccinated at New Beginnings Ministry, for a total of over 600.

Jones-Wilson says many people came with their spouses who could also be vaccinated, even if they weren’t of African descent. “It didn’t make sense to vaccinate half of the family,” she explains.

For the community coordinator, the clinic was a big success, and the feedback from the community was overwhelmingly positive. “Most people were in and out probably within a half an hour,” says Jones-Wilson.

Haase also says that there were only a few small hiccups during the clinic in terms of flow. “There were little things here and there that we learned from, you know the first clinic that we had, in terms of the flow for instance of the registration to vaccination, to recovery, that we switched around for the second clinic,” he says.

And while there is still mistrust, plenty of people were eager to get their shot. “The way that we collected names for the clinic, it was names of people who said, ‘we’re willing to have the vaccine,’” says Haase. “There were some people who put their names on the list who then changed their minds, but when people got to the point of being at the clinic they were committed.”

However, moving forward, there are still more opportunities to vaccinate  communities that are deemed at higher risk.

“When you look at data from Ontario, the US, UK, it’s clear that the Black communities are really disproportionately effected by COVID-19, not only in terms of the risk of higher rates of infections but also the risk of poor outcomes, including death,” Haase says.

It’s still unclear exactly where and when the next ANS community clinic will be, although there will be second-dose clinics in both Preston and Upper Hammonds Plains for those who got a first shot.

“We still need to encourage our communities and individuals to go out and their community clinics and pharmacy clinics, as they still need to be immunized,” says Haase.

But for Jones-Wilson, who got her shot at the clinic in Upper Hammonds Plains that she helped coordinate, having a clinic that was “for us, by us” was important.

“There’s not a great relationship between health authorities and the Black communities. So this made people a lot more comfortable because it was done by us,” she says. “Of course the health authority may have had the vaccines, but the initiative was put together through two Black organizations and all the volunteers were African Nova Scotian and it was held in an African Nova Scotian community.”

And on a larger scale, there’s still plenty that can be done to build trust in medical professionals among the African Nova Scotian community.

“Mistrust isn’t going to go away over the course of a month. So we have to continue to build the connections between good healthcare and the inclusion of people of African ancestry, and the recognition that systemic racism affects health and leads to poor health outcomes,” Davis-Murdoch says.

As the province recently announced it will now collect race-based health data, something HAAC has advocated for over 20 years, Davis-Murdoch days it’s another step towards building knowledge about communities that were previously overlooked.

“The pandemic has shone a light on the need for this across the world. So here we are 20 years later having asked for something that would’ve helped us, maybe positioned us better with COVID-19,” she says. “We will be better prepared for whatever happens in the future, that is our enduring hope.”