Who loses when the game is to have the sellers “see themselves in you.” 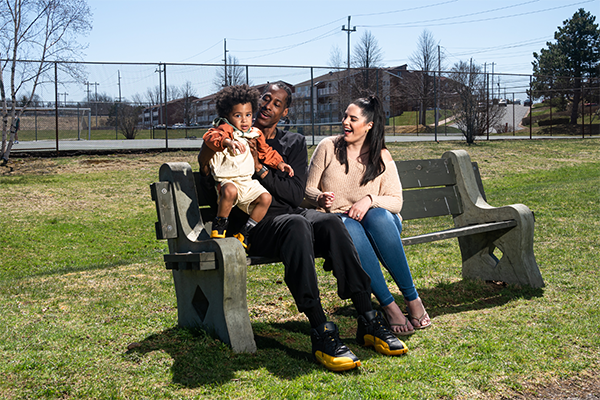 The Robinson family has bid on six houses in Halifax in the past year, each time offering at least $25,000 over asking. None of their bids were successful. IAN SELIG

Jillian Robinson was feeling quite confident about the letter she’d written to attach to her bid for a home in Halifax’s red-hot housing market. She chronicled her family of three’s life—an adorable toddler coming up fast on two years old; an American ex-NBA player dad working to turn around the local high school’s basketball record and hoping to enjoy what all the “top 10 places to live” lists have to say about Halifax; and Jillian, marketing manager and life-long Nova Scotian hoping to make a permanent home of the place that raised her.

She had the money and a good story. A slam dunk, she was thinking, until she went to attach a photo.

Jillian, who is white, was new to experiencing the world in a way that taught you to doubt your merit for something as arbitrary as the colour of your skin. But as her husband’s and son’s Black skin looked back at her on the computer screen, she saw them the way an older Halifax couple may see them. “I get this knot in my stomach that I think like, who is the person that's going to be reading this and what's going to be going through their mind and what kind of judgments are they going to make and is this going to hurt us?” she says of the memory.

Are you a house-hunting millennial? Better sharpen your pencil: Halifax’s high-demand low-supply housing market is driving sellers to choose buyers based on more than just their bid.

Nancy Worth, assistant professor in the department of geography and environmental management at the University of Waterloo, says that because “sometimes writing a letter is seen as a way of appealing to different aspects of the seller in terms of their motivation for who they want the house to go to,” in that space “I think there's really a potential for discrimination, whether it's implicit or explicit.”

Just look at all the racism, sexism and heterosexism in our society, Worth says. “It’s everywhere, so why would it not be in the home buying process?”

Chris Peters, a Halifax realtor who was the first Black president of the Nova Scotia Association of Realtors and is now the co-chair of its diversity and inclusion standing committee—which he started during his tenure as president—recalls a moment when a client of his got a home based on a personal connection they were able to make with the seller thanks to a letter and the attached photos They wrote the letter saying “I can see myself in you,” to the seller, hoping the seller could see themselves in the buyer. And it worked.

The Coast reported on a young couple who had a similar experience. They weren’t the highest bidder, but they were able to convey with words that they should be the ones to get the house.

And while there’s no way to prove that home sellers are violating Canada’s anti-discrimination laws when choosing a buyer based on a letter and a photo, there is significant evidence about bias in hiring patterns, workplace discrimination, mortgage lending and house appraisals. 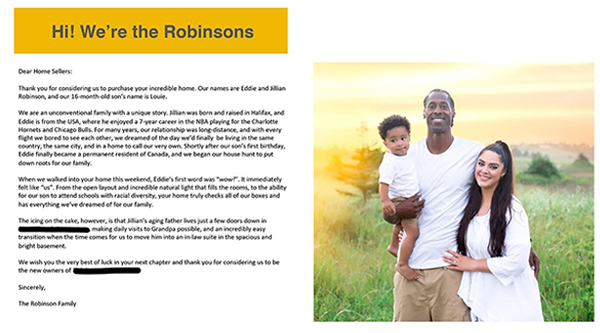 submitted
One of the letters the Robinsons sent along with their bid for a home in Halifax.

Robinson and her husband have bid on six houses in the under-$400,000 range, each time bidding at least $25,000 over asking, with no luck. That part of their story is not unique in Halifax right now. But the doubt Robinson feels when she thinks about the seller knowing the race of her family is unique—and very familiar—to equity-seeking groups.

Every time she wrote a letter, she says she decided to “grin and bear” that doubt, thinking “well, this is who we are and it is what it is and we don't want to have to hide that.”

Realtor Margaret Craig refers to it as the dark side of letter writing. An ethical dilemma that should push Haligonians to take a minute to think about who they are, and what kinds of things would influence who they want to sell their home to. And in a market where demand—bolstered by low interest rates, booming population growth, sharply raising rent prices, out-of-province interest and a ton of first-time home buyers with nothing to sell when they buy—is thoroughly exceeding supply, sellers really do have all the power.

Peters says the US has done a lot more work in this area—the Fair Housing Act frowns on letter writing precisely because it invites opportunity for bias—but that he hadn’t thought about it in the context of Halifax’s housing market before being contacted by The Coast to talk about it.

During his time leading NSAR, he struck up a committee to look at inclusion, diversity and equity within the organization. “Before you can address any issues, externally, you need to look inside your own house first,” he says.

Jillian’s husband, Eddie, says more than just the letter-writing process in Canada was weird compared to the US, where he’d last bought property. In Texas, Eddie says it’s more like “if you can afford it, you’re going to get it, no discrimination or nothing.”

He laments the closed-bidding process in Canada, where bidding wars don’t make sense because you don’t know what’s on the table; you could win a home by $3,000 or $30,000. “How can you bid on something you don’t know the numbers?”

Worth says these aspects of buying a house that introduce uncertainty—closed bids, letter writing, dropping conditions left right and centre—“are always going to privilege some groups and disadvantage others.”

And she adds “as housing becomes a larger percentage of people's take-home pay, there becomes a real squeeze there and not everybody is squeezed equally,” adding the further level of discrimination in wages, which begins to stack against equity-seeking groups before they even arrive in a position to start looking for a home.

For now, disenchanted by the whole process and privileged enough to have the option to live with parents, the Robinsons are holding out on the possibility of a private sale through a family member. It’ll mean they get to skip the part of the process that’s been the most disheartening: “putting myself in the mind of a 60-65 year old white couple and then thinking ‘there's a lot of people that aren’t gonna like this,’ is this a bad idea?”

Robinson hopes more people can consider “who is losing out in a crazy market when you don't fit the kind of celebrated look and feel of people?”