But 3 patients go into the hospital in Nova Scotia’s COVID-19 numbers. 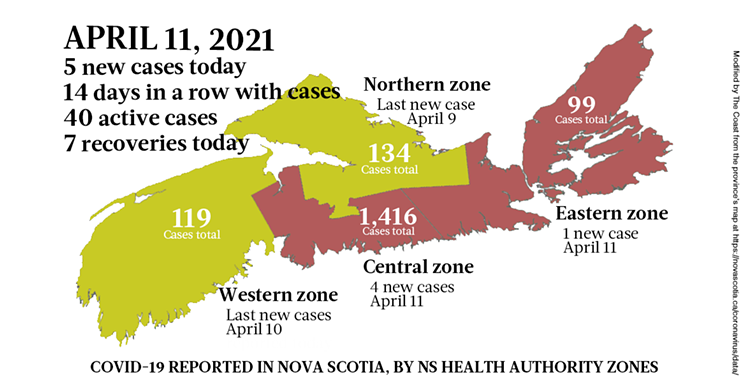 Nova Scotia is reporting five new COVID-19 infections in its daily disease update. Four of the cases are in the Central health authority zone, one is in the Eastern zone—specifically the Sydney health network, according to our table at the bottom of this post that makes it easy to understand provincial location data.

The new cases are a mix of "related to travel outside Atlantic Canada" and "close contacts of previously reported cases," to use the province's terms for contained, predictable disease vectors. None are "under investigation" as maybe being examples of chaotic community spread.

Today is a good day for recoveries. Seven patients recovered from their C19 infections since yesterday, outnumbering the new cases and causing the number of active cases to drop to 40. Before this drop, active cases had gone up for six days in a row, counting from Monday, April 5 when Nova Scotia's active caseload was 31.

Another patient disappeared from Nova Scotia's C19 tally, but it was more an accounting issue than a recovery. "One case that was reported yesterday in Central Zone has been removed from the cumulative count today, as it will be counted in another province," says the Nova Scotia update, highlighting a quirk of Canadian public health statistics that assigns a patient who's sick with C19 to their home province, even if they are in another province when they get diagnosed.

Yup, someone from Toronto going to school in Halifax could get infected here, be a transmission risk to other people here, recover and go about their student life here, yet only show up on Ontario's case count. It doesn't seem the best method to protect people here, no matter how nice it is when our case numbers go down. Anyway, the numbers in our map at the top of the page reflect the latest information from the province.

Yesterday, we were thrilled to let you know that no C19 patients were in hospital in Nova Scotia, for the first time in nearly two weeks. Unfortunately that joy is short-lived, because today's provincial update says three people are now hospitalized with the disease. This is a recent high: March 5, over a month ago, was the last time so many people with C19 were in NS hospitals.

Local labs completed 2,031 tests of Nova Scotian swabs yesterday. This is down more than 300 tests since yesterday, but still above the current daily average of 1,870 tests.

“Spring is finally here in Nova Scotia and after a long winter, I know how much Nova Scotians want to spend time with family and friends outdoors,” says premier Iain Rankin in today's report. “We must remember that COVID-19 doesn’t take a break and neither should we. Enjoy the outdoors safely by following public health measures like sticking with your small close group and socially distancing when you need to.”

Speaking of breaks, vaccination details aren't reported on weekends in Nova Scotia, so we can't tell you exactly how the vax program is going. However, we have an informed suspicion that it went slowly on Saturday, and it's reduced to a crawl today.

We've been asking the province for details on how many vaccination clinics are open on various days of the week. The latest information we have from the province—for the March 27 weekend before the Easter long weekend—gives an idea of how much of a vacation the inoculation effort takes after the standard Monday-to-Friday work week. "There were 22 vaccine clinics on Friday, 13 on Saturday and four on Sunday," the department of health and wellness told us. Saturday was about half strength, in other words, and Sunday was less than 20 percent.

But like the premier says, "We must remember that COVID-19 doesn’t take a break and neither should we."

Where Nova Scotia’s COVID-19 cases are on Sunday, April 11