The Hill’s times: From its origins as a forest-covered Mi’kmaq meeting place to it’s national parks status today, the history of The Citadel is colourful and even a bit mysterious. 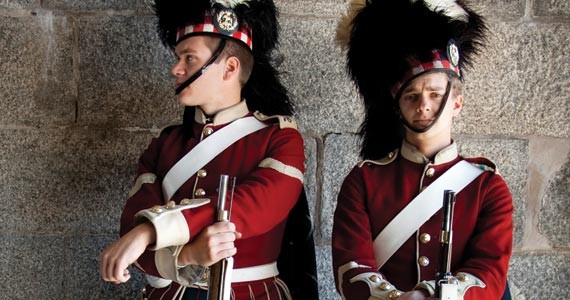 You thrill to the green grass springing to life on Halifax's iconic hill, basking in the sun as you lay on that slope. (Or in winter, slide down its icy side.) Maybe you even walk along the stone fortress, or get up close every couple of years to witness the command of the noon cannon, but how much do you really know about the life, heart and history of Citadel Hill?

The Halifax Citadel National Historic Site is the official name of the fortress on the hill. Although it's had a number of makeovers (four, to be exact), that hill, and the various fortresses that have graced it, has been a Halifax icon for centuries and continues to be one of Canada's most visited sites. When thick forest still covered the drumlin (a glacier-formed hill), it was a Mi'kmaq meeting place. Following that, says visitor experience product manager Hal Thompson, "you can actually track the history of North America from the 1750s to the present by the building of forts here...they were built in times of war." All except for the earthwork fortress that stands today, which was built in the 1820s out of fear of war with the US.

Throughout its history, the Citadel has been the heartbeat of this little port town we call home. During its heyday, along with other fortresses, the Citadel served as a defence and deterrent to potential attackers. Brawny, robust men lived within its walls, ready to guard the harbour. Officers and their families made a life there. Once the threat of war had passed, says Thompson, it became a place where troops could relax---the fort had a library, gymnasium and skittles (a predecessor to bowling) alley. Concerts, parades and tobogganing festivals were held on the hill and tour guides were on detail. "Even before it was an historic site, it was an historic site," says Thompson.

History, however, isn't all roses, and the Citadel holds its tales of woe, which intertwine with its tales of mystery. During the 1830s, military prisoners with terms of less than a month were kept in gun rooms, sometimes 40 men to a damp, dark room. In recent years, tales abound of people seeing soldiers who could not have been there, hearing footsteps and odd clanking noises, and of displays being perfectly set up only to be found in disarray hours---and once, even minutes---later.

Another mystery lies in the many tunnels that have been found running from the Citadel to the harbour, the old post office, the legislature and the old power station to name a few. "We don't know what they were for...there are no records of those tunnels being built," says Thompson. An engineer, before dying, said he'd been commissioned to build a tunnel to the harbour and Georges Island---the one to the harbour exists for sure, while the one to Georges remains cloaked in mystery. Mines full of gunpowder also existed in tunnels on the hill, ready to be lit and destroy invading troops.

Until the late 1970s, the Citadel was a mishmash of run-over storage for provincial museums. However, the Citadel now emphasizes itself, inviting visitors into the rich history of its many uses and faces over the years, and providing a hands-on, sights and sounds experience of the life of the Citadel during the mid-Victorian period. Unlike those museums we all grew up with where we gazed with longing and curiosity past a red velvet barrier, visitors are welcome to unroll a soldiers kit, try on jackets or sign up to enlist in the regiment with a live clerk overseeing the process, following the belief Thompson holds to, that you can't understand history unless you re-enact it. In addition to the live and interactive displays of history, the Citadel features two pretty cool museums.

It's Parks Canada's 100th birthday this year, which means this summer is going to be the best one yet to get to know the fort on the hill. From crazy-involved living displays and encampments covering a number of the Citadel's eras of action, to bands and even cake, check out parkscanada.gc.ca/halifaxcitadel for what to do at the site this summer.

Finally, for those of you who are hoping for a chance to fire the noon cannon one day, "the best way is to join the royal artillery," says Thompson. Firing a rifle would be easier, through the soldier-for-a-day program, because the closest you could get to firing the cannon would be to give the command. It's a solemn affair, though, "a ceremony," says Thompson. But unless you're a dignitary, The White Stripes or Sidney Crosby, your chances are slim.

Charlene Davis thinks touring your own town is highly underrated. She plans to become a tourist of the HRM this summer and make up for her hiatus from nomadism.