From being in the "pandemic sex recession" to refusing to leave the closet. 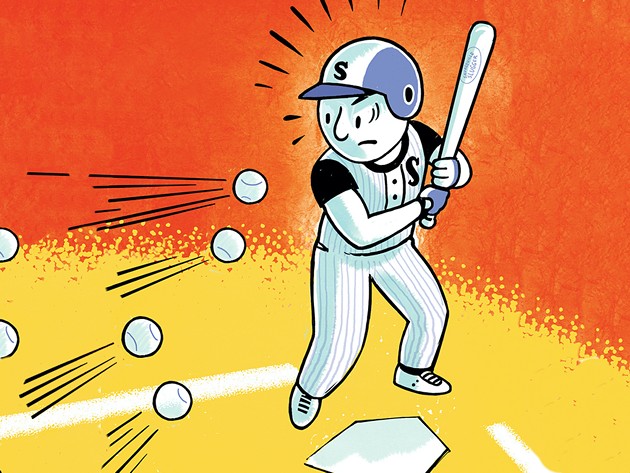 Joe Newton
Dan takes a swing at lots of questions this week. Do you think he hit any home runs?

QI'm a 30-year-old straight woman in a three-year relationship with my live-in partner, who is also 30. I love him and he loves me and he wants to make a life with me. However, in this pandemic, the stress is so great that I have lost all desire to have sex. I don't want anyone touching me right now, not even myself.

I feel like I'm in survival mode. I lost the career I love and I’m working four different jobs to make up for it. I have also been coming to terms in therapy with a sexual trauma I suffered, which is making me want to be touched even less. He's been extremely patient, and says that we can work through it, but I'm really worried that this is the death knell for our relationship. I'm really trying to figure out ways to get myself back in good working order, Dan, but honestly I'm just trying to survive every day right now. Help?
—Witty Acronym Here

AFirst, you’re not alone. So many people have seen their libidos tank in response to the overlapping stresses of lockdowns and job losses that sex researcher are talking about (and documenting) a “pandemic sex recession.” So what can you do?

You have a long, hard slog in front of you, personally and professionally, and you need to carve out enough time and space for yourself to you get through this. And to do that you’re not just gonna need to reset your partner’s expectations for the duration of the pandemic and/or until you’re back on your feet again professionally and emotionally, you’re going to need to take his yes for an answer.

If he tells you he’s willing to tough/rub it out until you’re less stressed out, less overworked and less overwhelmed, and he’s not being passive aggressive about your lack of desire, then you should take him at his word. If he’s not trying to make you feel bad about the sex you aren’t having right now, WAH, don’t make yourself feel bad about it.

There’s no guarantee your relationship will survive this (the pandemic), that (your crushing workload) or the other thing (the trauma you’re working through in therapy). Any one of those things—or some other thing—could wind up being the death knell for your relationship. But the only way to find out if your desire for your partner will kick back into gear post-pandemic, post-career-crisis and post-coming-to-terms-with-past-sexual-trauma is to hang in there, WAH, and reassess once your past those posts. Will you two still be together once you’re out of survival mode? Survive and find out. Good luck.

QI'm a 34-year-old straight woman dating a 32-year-old straight man. When we first met, we had both recently relocated to our hometown and were living with our parents. When we first started dating, things were great; however, the sex wasn't mind-blowing. Foreplay was limited and he always jumped out of bed afterward. I thought this was probably due to the fact that while we had privacy, we were having sex at my parent's house which isn’t particularly sexy.

We finally moved in together nine months ago and now it feels like we've been married for decades. He almost always turns my sexual advances down. And when we do have sex, it lasts about five minutes and I do all of the work and get ZERO satisfaction out of it. He will hold my hand on the couch, but if I ask him to cuddle he acts like I am asking for a huge favour. I’ve explained to him I need to feel wanted and to have some kind of intimacy in this relationship. And yet, despite the multiple conversations about how sexually, physically and emotionally unsatisfied I am, he has put in little effort.

Otherwise, our relationship is great. We have fun together, I love him, I want to be with him, and we’ve talked about marriage and kids, but I also can’t live this way for the rest of my life. What can I expect from a man who is emotionally and physically unavailable?
—Intimate Needs That Involve Making A Team Effort

AA lifetime of frustration.
You wanna make the sex and physical intimacy work because so much else is working—it sounds like pretty much everything else is working—but you can’t make the sex and intimacy work if he’s not willing to work on it. And even if he was willing to work on it, INTIMATE, even if he was willing to make an effort sexually, there’s no guarantee that working on it will actually work.

QMy fiance and I (both male) have been together for six years. I am fully out, but he is only out to his close friends and his mom. The rest of his family doesn't know. His co-workers don't know. I've met his family and co-workers and played the “friend” and “roommate” and it kills me, but he still won’t budge. It's also not like homosexuality is taboo in his family. He has a gay uncle, and his uncle and his partner are invited to family holidays and welcomed with open arms. Is it even worth continuing this relationship?
—Feeling Insecure About Needlessly Closeted Engagement

AYour fiance has to choose: He can have you or he can have his closet, but he can’t have both. It’s not about telling him what to do, FIANCE, it’s about setting boundaries around what you’re willing to do. And for the last six years you let him drag you back into the closet—you were willing to pretend to be his friend or his roommate—but you’re not willing to do that anymore. If he wants to have a life with you, he can choose to come out. If he’s not willing to come out, he’ll have to learn to live without you.

QI wanted to say something about WEASS, the man with the HIV-positive boyfriend who was reluctant to disclose his status to a new sex partner. You answered his question in Savage Love a couple weeks ago.

As someone who’s been HIV-positive and undetectable for almost 18 years, Dan, I’ve gone through a few different iterations of dealing with (or not) and disclosing my status (or not). But starting about 10 years ago, it just seemed easier on my conscience to disclose my +/U status to my partners—that is, HIV-positive but undetectable and therefore not capable of infecting anyone.

Even after nearly a decade of PrEP and decades of HIV education, my status still generates negative reactions ranging from guys declaring me “not clean” to guys accusing me of trying to spread the virus (which I literally can’t do) to guys rebuffing me in kinder ways. Even people on PrEP have gone from DTF to “no thanks” when I’ve disclosed. So based on my experiences, Dan, I don’t think that every potential hookup out there would react in an informed and rational way, not even guys on PrEP.
—Undetectable Poz Fellow Relieved Over Not Telling Any Lies