For The Khyber, for us all | The Coast Halifax

For The Khyber, for us all

Morgan Mullin
“Because of the amazing history of the Turret Club and the Gay Alliance For Equality, this space has a home in queer history,” Turret Arts Space Society president Emily Davidson says.

Emily Davidson sits, folded over on herself, in a corner on the third floor of 1588 Barrington Street. It’s not just any corner, of course. “This used to be the DJ booth back when it was the Turret Club,” the Turret Arts Space Society president says. Sunlight slides across a floor filled with memories as she imagines when this was one of the city’s oldest gay bars. Soon, this floor, this corner, will be re-incarnated yet again—this time as an all-purpose room for artists of all mediums, a key part of the Turret Arts Space Society’s vision of a new Khyber Building.

“The Turret Arts Space is going to act as part of an entry point into our arts ecosystem: somewhere for emerging artists to cut their teeth and build their skills and then move their career as an artist to the next level,” Davidson says. She and the rest of the Turret Arts Space Society have high hopes for what the return of the historical Barrington Street arts space will do for the city: “It’s going to bring segments of the arts community back downtown that have been out of this neighbourhood for a long while.”

As the city continues to navigate a dearth of mid-sized venues for artists in the early and middle stages of their career, The Turret Arts Space will be a lifeline: “So how are we gonna get to the Waterfront Arts Centre and fill that space with local talent if we’re not supporting people from the ground up, through the beginning of their career, through career changes?” she adds. Alongside spaces like Radstorm, 2482 Maynard and The Bus Stop Theatre, she says the renovation and reopening of 1588 Barrington is “going to have this really dynamic community that’s going to be intergenerational, that’s going to be people from different walks of life.”

But the biggest of dreams can’t happen on imagination alone. Yes, even after the city sold the building where Joel Plaskett met his love and got his start for a dollar to the society in 2018, there remains a budgetary hole to fill. “We really want to show the government it’s not just the people writing grants and the nice-looking feasibility study that shows our business plan is solid, but actually, the members of the community are engaged and want to see this project happen,” Davidson explains, adding that the organization is looking to crowdfund $100,000 to help bring the society's vision of a physically, culturally and financially accessible arts space in the historic spot to life. (The rest of the funding to update the building—and to remove the onsite asbestos—will be coming from the Canada Cultural Spaces Fund, HRM and the province.)

Aside from that third-floor multi-purpose space (which Davidson adds will be perfect for “live music, experimental theatre type things and really cutting edge visual art”), Davidson offers a tour of the building’s three floors so full of excitement you can almost see the space as she does—not scaffolding and paint cans but a cross-pollination of inspiration and art. There will be two commercial tenants on the building’s main floor and eight to 10 nonprofits populating the second floor (one of which, Davidson says, will hopefully be The Khyber Centre for The Arts, which has spent the last few years showcasing boundary-breaking art at 1880 Hollis street). A fourth floor will also also be added to the structure. 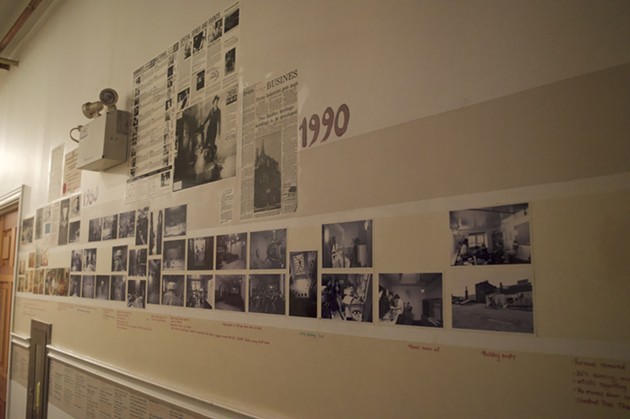 After a tour of the space, Davidson turns out the lights, getting ready to rejoin the bustle of foot traffic at the base of the building’s sweeping stone steps. The switch flicks over a back room—her favourite part of the building—where an unknown hand has kept a timeline of the Khyber’s many lives: From being the Church of England Institute in the 1880s to the headquarters of Halifax’s 2SLGBTQ+ rights movement to a contemporary art gallery. Glued-up photos and a snaking, handwritten record curl around the room like a wallpaper border.

“Bringing the history forward is important to this project. This building has already shown us the importance of having a cross-disciplinary arts hub: It has been that in more temporary ways and not always to its full capacity. But what it’s shown us in the history is that can happen here,” Davidson says. “For me, it was a line in the sand: No, not one more space will close and be removed from the arts community. That this space had so much inherent potential: It felt like no, this is the one to rally behind.”