""Removing a barrier like a library fine gives everyone in our community the opportunity to have a lifelong relationship with their public library." 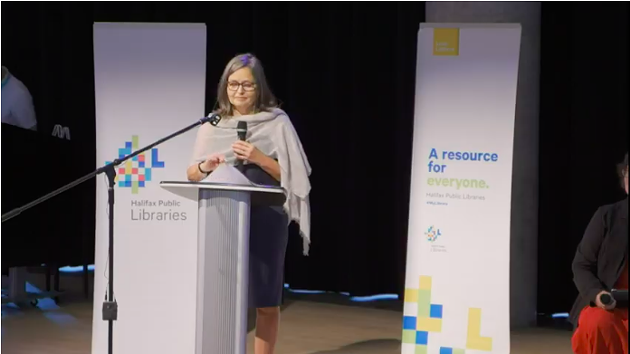 Youtube screenshot
Halifax Public LIbraries CEO Åsa Kachan says the move to eliminate library fines is "long overdue."
Halifax's bastion of good is at it again, levelling up the municipality's most equitable and accessible service once more: Effective immediately, all outstanding overdue fines with Halifax Public Libraries have been wiped from the system, and any future fines won't happen at all.

For those who saw their overdue fines as a donation to the library, it may not seem like much. But for library users who would pay off their overdue fines a dollar at a time in order to keep it below the "freeze" amount—or who stopped going to the library altogether because of a book lost years ago or for whom the possibility of having to pay fines was enough to keep them away—it should make a big difference.

Halifax Public Libraries CEO Åsa Kachan says there are many reasons someone may end up with overdue fines: limited access to child care; limited access to transportation; employment opportunities that are sporadic; families that don't have a regular schedule. Most often, fines were disproportionately affecting the most vulnerable in our community.

"A library fine actually creates a barrier to access," says Kachan. "Removing a barrier like a library fine gives everyone in our community the opportunity to have a lifelong relationship with their public library. From a card as a baby through to their retirement and into their later years."

That's awesome. I tried to get my daughter a library card and the website wouldn't let me because of fees that I had from like 15 years previously. That was some time ago but I never did try again.


Because of changes in user behaviour, checking out e-books and electronic resources that are automatically returned, the revenue the library received from fines was decreasing yearly anyway—and in light of COVID, the library had already decided to eliminate fines for the rest of 2020. Fines accounted for less than one percent of the library's budget. Kachan says she thinks users will notice the benefit of being able to use the library without worrying about fines much more than the effect of any lost revenue.

Kachan cuts through the bureaucracy often cited by other arms of HRM when talking about how it's just so complex to change things in government and public services (looking at you Board of Police Commissioners and HRP) and makes a simple case for this kind of people-first change:


"If we are not collecting fines it actually frees our staff up to do some really important work with the community. So rather than spending time across 14 locations collecting small amounts of money and cashing that out at the end of the night, sometimes having difficult discussions with the public about fines, our staff now will be free to spend their energy and on activities and conversations that are really about having a more positive impact in our community."

Kachan says there were around 37,000 users who had their cards blocked due to fines, who now can walk into the library worry-free. Some of the fines have been there for decades, tied to a book lost in the back of a closet or forgotten at a park.

Perhaps there's a book sitting on your shelf you've meant to bring back but felt shame about doing so. This change is for you. The library misses you.

The library will still charge fees for lost books, but what it wants more than its money back on a book your dog chewed to bits is for you to use the library for all its worth, as often as you want, for the rest of your life.