Accidentally released message shows Discover Halifax is ready to act if the premier goes ahead with his risky plan.

The first half of the since-retracted "Welcome back to Halifax, Canada!" email from Discover Halifax.

Even when he announced the Atlantic bubble back in June, premier Stephen McNeil clearly had bigger things on his mind. “The next step after that will be opening up our province to the rest of Canada,” he said at a June 18 briefing. As for timing, he offered “the end of the second week, third week of July, in that general area.”

Now we’re in the fourth week of July, well into tourism season, with no official word on a Canadian opening, and hundreds of COVID-19 cases being diagnosed every day in the rest of the country. Trying to make McNeil’s dream come true is an unnecessary risk at this point, to both the health of Nova Scotians and the Atlantic bubble agreement. But it hasn’t died yet.

This afternoon, Discover Halifax sent an email out under the subject line “Welcome back to Halifax, Canada!” Although the email was soon retracted as an accident, it hints that the city’s tourism arm could be standing by for an announcement from the premier. Is McNeil dropping hints that the general public isn’t privy to?

The email is clearly a draft. “Canadians can now reunite with family and friends coast to coast. The Province of Nova Scotia announced <LINK to press release> unrestricted travel throughout Canada <or list provinces>,” it reads, with placeholders for information that will come if or when McNeil opens the floodgates. “As of <date>, self-isolation for 14-days is no longer required when you enter Nova Scotia from <these/all> provinces and territories.”


Maybe the email was accidentally sent out by a media relations team that is working on dozens of draft messages to be prepared for every possible thing the premier might do. Maybe it was "accidentally" released to soften the ground for an impending announcement. But just as a reminder of McNeil’s fixation on opening Nova Scotia up to the rest of Canada, the email has inspired local anger.

“One day after the province announced a comprehensive back-to-school plan that prioritized children, we get this obvious sign that the government intends to lift the quarantine restrictions that are vital to preserving the school year. It’s infuriating," says Karen Schaffer, mother of a 14-year-old who’s heading to Citadel High School in a few weeks. "The McNeil government is not putting kids first, it's not listening to parents, and it's failing to understand the impact this will have on the economy long term."

At 4:10 Thursday afternoon, the province sent out a notice to media that McNeil and top public health doc Robert Strang will be holding one of their COVID-19 briefings, tomorrow at 1pm. You can watch the webcast live Friday afternoon, or catch it later at the Nova Scotia government's YouTube page.

Although they used to brief the public three times a week—Tuesdays, Wednesdays and Fridays—Strang and McNeil are not currently committed to any regular schedule. Their last briefing together was Friday, July 17. 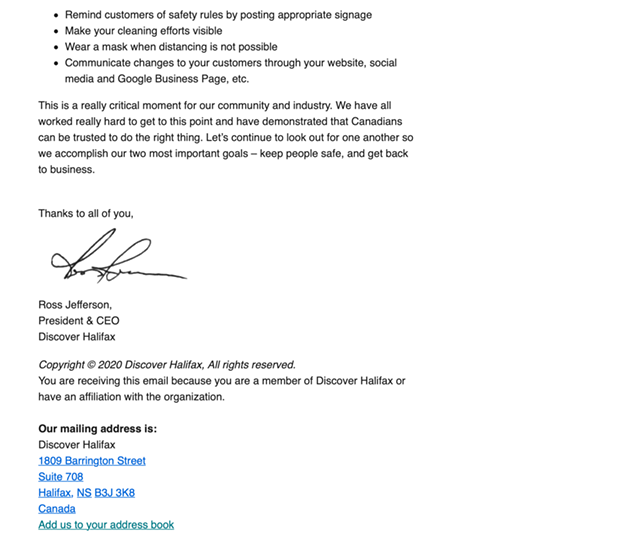 Second half of the draft email about opening Nova Scotia to the rest of Canada, which Discover Halifax accidentally sent out.