Congratulations to Caora McKenna, Andrew Bethune and a King’s collab.

Normally this happens Saturday night in a hotel ballroom with plenty of wine, but that was a habit from the old normal. In the current normal, the winners of the 2019 Atlantic Journalism Awards were announced this morning by email, prompting lots of heartfelt texting and Tweeting, and very few drunk tears. Hmmm.

Journalism awards are a reflection on the work one media organization produces, compared to what other media orgs are doing, mixed with the endless variety of human factors among the people choosing the nominees and giving out the prizes. Some years The Coast doesn’t get any love from the AJAs. This, however, is not one of those years. We are walking away from our email inbox with three awards, a little less groomed than at a standard award ceremony, but just as thankful and thrilled. 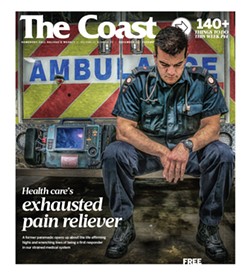 In the category of Feature: Newspaper, honouring the best feature story to appear in a newspaper in 2019, freelance journalist Andrew Bethune received the gold prize for his Coast cover story “Health care’s exhausted pain reliever.” A memoir from Andrew’s pre-journalism career as a paramedic, the article is emotional and informative, inspiring and enraging. It was an important story when it came out last December, but right now, with so much weight on front-line health care workers (because of COVID-19) and first responders (from the mass shootings), it is required reading.

The Coast’s city editor Caora McKenna won silver in the Enterprise Reporting: Newspaper category for “The methadone method,” her November cover story about opioid use. Caora spoke to several people who live with addiction, as well as medical professionals, to get a full picture of how treatments like methadone improve lives, and how small government policy changing “are making things easier for people in recovery.” Note that Caora is a full-time editor at The Coast, so was juggling regular weekly newspaper writing and editing duties while she worked on this story, making her award win that much more impressive. 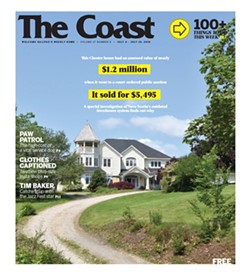 Finally, The Coast got to play a part in “Foreclosed,” the project that won gold for Best Student Journalism. The j-school at King’s College has a workshop in investigative reporting, run by veteran reporter-turned-professor Fred Vallance-Jones, and in 2019 Vallance-Jones and his students focused on the way property foreclosures work in Nova Scotia. They discovered the province’s outdated system favours lawyers and banks over regular house buyers, and The Coast joined The Port Hawkesbury Reporter, Pictou’s The Advocate and King’s own The Signal in publishing it. Our version was called “Inside Canada’s foreclosure playground,” running as the cover story for the July 4 issue.

To the King’s Investigative Workshop, Caora McKenna and Andrew Bethune, I offer congratulations and sincere thanks on behalf of The Coast and other fans of great journalism. Congratulations also to all the other AJA winners, so many of whom have Coast connections (full list below). And to COVID-19, you may be able to crash a party, but you can’t stop a celebration.