From stairs to small stalls, Halifax's bars and clubs are full of barriers to accessibility.

It's been two years since Vicky Levack has gone dancing—like proper dancing. DJ and lights and a hot outfit. On Saturday she dons a red dress, red lipstick to match. Diamond earrings and a black clutch and black lacey tights—seriously ready to hit the town.

"All I want is a Purple Haze and a cute boy to ask me to dance," the 29-year-old says as we walk up Granville Street, away from the back entrance to the new Pacifico. "That's all I want in the whole world."

Minutes earlier, we learned the hard way that the small elevator at the back of Pacifico isn't big enough for Levack's Quantum Edge power chair. It can likely fit a human-powered wheelchair, but hers—which she uses to move around while living with cerebral palsy and is the smallest power chair you can get—was too big.

She was furious and she was embarrassed. "This is why I don't do this," she said as she reversed and went forward and reversed again, trying to wiggle her 300-pound power chair into the incredibly tight space with precision. There just wasn't enough room. You could hear the music coming from the dance floor above through the elevator shaft. But we were stuck: Out of luck and we'd just started.

HRM has 47 Access-A-Bus busses in its fleet and six were added in the last two years. Even with recent improvements, securing a one-day’s notice return trip for Levack wasn’t easy. In July, Halifax Transit’s manager of operations Mike Spicer told the Transportation Standing Committee that riders are “starting to get a little more faith in us,” and Levack is one of those riders. New software in 2018 and the 2019 plan reinforcing Halifax Transit’s commitment to improving services means riders can now give only 24-hour’s notice for a trip. But if you ask Levack, there are no guarantees, and she sticks to the old rule of giving a week’s notice when booking trips. (Goodbye spontaneity.)

At that point, it felt like all the effort—the dead-end phone calls to cab companies and 30 minutes on the phone with Access-A-Bus services, emails in advance to ensure the dance floor was accessible for someone who uses as mobility device, picking out the perfect outfit ahead of time so a nurse could help her into it—was for nothing.

"Even if you cross all your t's and dot all your i's, things can not go well," says Levack.

There are about 20 bars or clubs in downtown Halifax where, on a good night, able-bodied folks can go dancing.

Only one is fully accessible. There's a slanted entrance or a step up to order at the bar or a step down to get to the centre of the dance floor. Washrooms are down a flight of stairs or the stalls are all too small or don't have supportive bars or room for someone in a chair and another person.

The best-case scenarios involve a phone number and a ramp that has to be brought out, or having to ask doe-eyed security guards to call a manager to open a set of doors that aren't usually available to the public.

We decide to take our chances, wrangling another manager if it means that red dress gets to do what it was put on for. From Pacifico it's on to plan b.

We head up through Grand Parade on our way to Hide + Seek—where it turns out the sidewalk doesn't have accessible ramp access to cross Argyle Street onto Carmichael Street—so we wind past the Dome's front entrance. It's under renovations and pylons line the sidewalk. Inside, it's a maze of stairs from the entrance to the dance floor. Unless you want to hang out at coat check all night, it's entirely inaccessible. "If I'm 17 and I want to sneak into a bar," says Levack, "I should be able to do that."

We turn onto Grafton Street. It is notably dead. At 10pm on Saturday, most folks heading out for a night of dancing are probably chugging cheap wine and dancing in the kitchen to "Don't Stop Believin'." But between the restrictive process for scheduling an Access-A-Bus and a wedding Levack has to go to the next night, we were out early.

Of the sweat-and-$4-shot-emporium that is Cheers Live/The Dome/Roxbury/Hide + Seek, only the entrance to Cheers Live and Nomad—we've never heard of it either—is accessible. The staff elevator just inside the door is spacious, enough for Vicky to comfortably get into and out of—no wiggling.

We dance to a few pop-country hits from 2012 with line-dancers in their cowboy boots, when Levack leans over and says with a laugh, "I prefer pop music."

We decide to move on in the name of better beats, but not before the inventor of pop country (see Up! and its three studio-album versions), Shania, sings us out with her '95 hit "Whose Bed Have Your Boots Been Under." Levack orders another Purple Haze before we go. 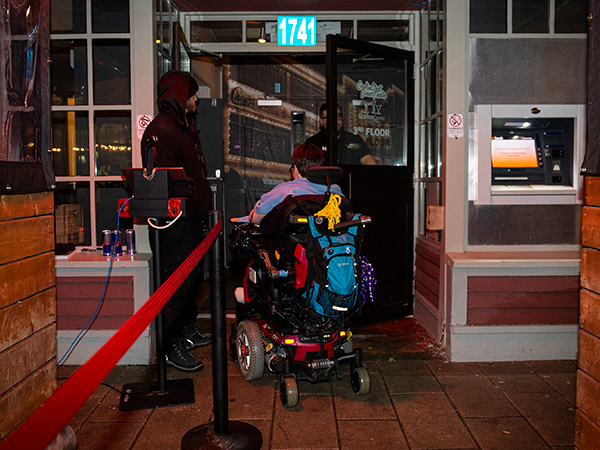 In downtown Halifax there are about 20 places you can go dancing. The Coast’s research found that only one of those places is no-strings-attached-no-need-for-a-manager accessible. Five spots are not accessible at all, and at five spots there’s an accessible entrance but no accessible washrooms. The Carleton on Argyle Street has a hefty ramp that waits inside the front doors—which are a step up from street level. A sign on the wooden planters that mark the entrance has a phone number to call if you need an accessible entrance. Someone working the door will put out the ramp and unlock the accessible potential of the venue—accessible washrooms, an accessible dance floor and no stairs to get up to the bar to order a drink. Carleton owner Karen Spaulding says making the changes in 2018 was very challenging, “but very worthwhile.” When it comes to making spaces accessible, owners have to deal with landlords, contractors, the city, old buildings and historic property rules and—at the end of the day—a large amount of money. “It is a lot of trade-offs and conversations and money. But one cannot deny the importance of having the conversation and working towards full accessibility.”

Hide + Seek is open (albeit empty), but the main entrance is up a large flight of stairs. A manager, successfully wrangled, is able to open the off-limits double doors connecting Cheers Live to Hide + Seek. A trip that usually involves going back downstairs, outside, down the sidewalk two doors, a cover charge, back inside and up another set of stairs.

Purple Haze in tow, we head to the centre of the dance floor. A request for some Britney Spears was met with an even-keeled "I don't play Britney Spears" from DJ KVZI, but hip hop and R&B hits have us moving. We've made it.

The dance floor is empty—"I wonder, if we'd been able to stay out later, would there have been more people," Levack asks later—but DJ Henry T comes through. As a group of friends arrives through the swanky red-velvet rope (not a feature of the double-door accessible entrance) and goes for drinks at the bar, out of the speakers comes the infamous electro-violin trill, a beat and then: "Baby can't you see, I'm calling."

Eyes are made at the hot bouncer crossing the dance floor. Arms are waved in the air as Spears' "Toxic" plays.

This is what we came here for. 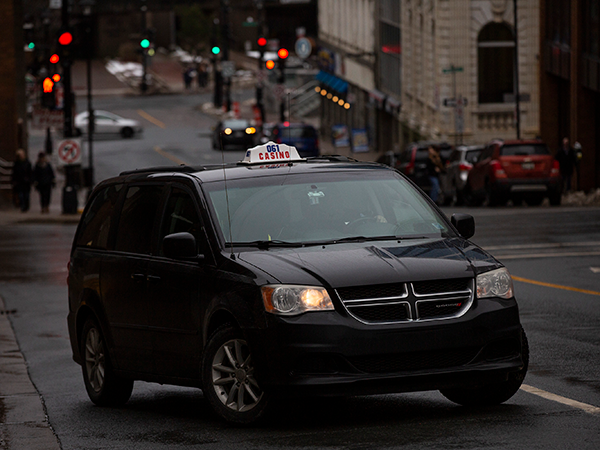 There are only 14 licensed accessible taxis in Halifax. A call to the dispatcher to book one in advance is met with no guarantees anyone will be on the road to get you. If you manage to get one, there’s no guarantee there will be one on the roads to take you home. When HRM made sweeping updates to its Taxi and Limousine by-laws it noted that the situation for accessible taxis in the city is bad. The proposed solution was to write a letter to the province asking for permission to provide one-time grants and trip subsidies to potential drivers to help with the high cost of operating an accessible taxi. It hasn’t received any response. This week’s step forward for TNC’s in the city means there could be a seven-cents-per-trip charge to companies like Uber directed to a fund for these incentives (pending provincial approval).

Although the music is heating up and people are showing up, we don't have the luxury of falling into the sway of the night. An Access-A-Bus is arriving outside Pacifco in a half-hour window between 11:30pm and midnight—there's no system to communicate our last-minute change of plans to our Access-A-Bus driver—and missing it would mean being stranded. Getting an accessible taxi after 6pm on a weekday is out of the question, let alone late on a Saturday.

Riding the elevator down from Cheers Live to the ground floor on Grafton Street, Levack says the place is "beautifully accessible." A big part of that is thanks to the Hide + Seek manager, who went out of his way to make sure we had as much fun as possible. Levack plans to come back.

Levack stays on Grafton, and after hearing how the night unfolded, the Access-A-Bus driver obliges to drive the three blocks from Pacifico to Cheers Live to take Levack home to Arborstone Enhanced Care nursing home. (You can ask Levack how frustrating it feels to have to head home from the bar in your 20s to your 80-year-old roommates at the nursing home.)

Once the Access-A-Bus is parked, the driver gets out and lowers the lift. People are moving around Grafton Street, bouncing between lines and shouting to friends. Folks who left their winter coats at home spring from cabs—only half-questioning if they'll be able to get one to take home—and double back for their phones left lying on the seats.

It is starting to rain, a reminder of how weather-dependent our night out was. We couldn't have made the trek up from Pacifico to Hide + Seek if it'd been raining or snowing at the time: Thanks to the recent thaw, the sidewalks were clear.

Before the lift reaches the ground Levack says: "I feel fucking normal.

"That's an amazing thing to feel, to feel fucking normal."