An eye for composition and mimicry of Byzantine style await at this Teichert Gallery exhibit. 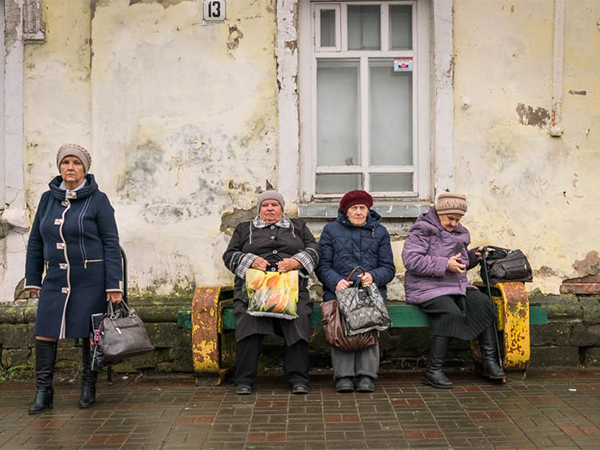 I n the genre of travel photography, the visiting artist runs the risk of moving through their locales like an invasive species: capturing subjects without permission, walking into sacred and private moments with the unearned authority of the western traveller (an especially cringe-worthy phenomenon when race and class are at play, as they so often are).

But, when done right, this type of photography has the ability to show compassionate glimpses into cultural exchanges—and reveal eager subjects happy to share their world. In Now, a collection of photographs from a 2018 trip to Russia, artist Anne Launcelott introduces us to a small village and the people that make up its community. The population of the village is an aging one, centred around the nearby farms, churches and the local shop—all of which serve as backdrops for Launcelott's subjects. The show is small—just nine pieces—but is quite impactful. There are moments where subjects appear caught off guard (a woman sweeping, figures in prayer) but there are also moments where farmers pose proudly with their equipment or an old man stands with his accordion, the shelves behind him overflowing with pots and vessels.Launcelott has a wonderful eye for composition, and manages to represent her subjects in poses that often mirror the Byzantine styles of religious iconography so common in Russian Orthodoxy: The painted saints with their severe, dark-eyed faces, standing tall and willowy as the bright gold around them begins to chip. In some ways Launcelott captures the villagers as these saints come to life—a man standing leanly between two such paintings, or a priest swinging incense, his dark beard and square, black headpiece mirroring the image of Christ's face in draped cloth above. Much like the churches themselves, Launcelott's images hold drama and warmth with their deep shadows and golden candles, as well as the reality and harshness of decay.