A perfect pit-stop on a valley road trip, the Windsor bar celebrates its grand opening this month. 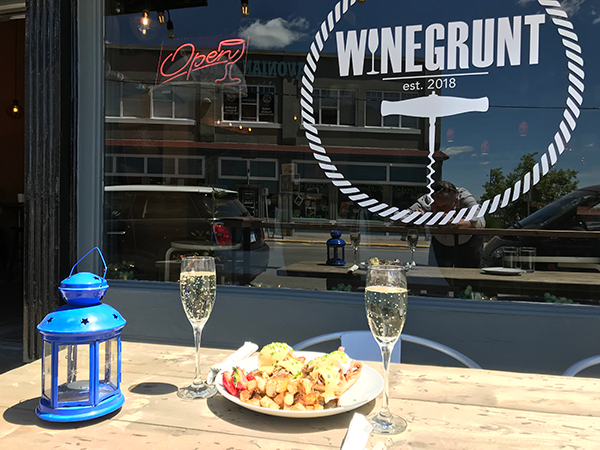 Something new is greeting visitors to Nova Scotia wine country: A wine bar run by former university professors, in an unlikely town, with an entirely sensible location.

"So many times, we stopped in Windsor," says Robert Buranello, of trips to the Annapolis Valley from Halifax, where he and partner Astrid Friedrich lived. They both worked for wineries and wine tour companies in the valley. "And we thought, this is a nice strip, with some infrastructure...strategically, it's pretty good."

And so, Friedrich and Buranello moved to the agri-industrial town of Windsor, birthplace of hockey, and in the "heart of the Windsor strip," opened Winegrunt, the wine bar they had been thinking about since their first visit to Nova Scotia in 2013.

Building Winegrunt, Friedrich and Buranello have taken cues from the immediate community at every turn. For starters, 90 percent of the wine is made here, says Buranello, "with at least one wine from every winery" in Nova Scotia. Winegrunt also carries national and international wines, but "the focus is local," he says, a theme extended to the menu, which is created from homegrown meat, cheese and veg. The bar itself is a reflection of the town it calls home: Ropes and pulleys give it a nautical feel, and the bar rail is a railway rail, hearkening back to Windsor's days as a hub of shipbuilding and rail.

On July 14, Winegrunt will celebrate its one-year anniversary with a Jazzy Jam, an all-day music-focused party showcasing the other thing that has put Winegrunt on the map—high-quality local music.

"We started booking really great musicians, and word got out," says Buranello, "Now we're booked through to the end of November." Jazzy Jam is a way of thanking ("with a whole bunch of beer") the musicians who have been jazzing up the vibe at Winegrunt over the past year, and repaying (with live music and prizes) the community for its support.

Indeed, Windsor has given Winegrunt a warm welcome. "Before opening, we were invited by the mayor to a meeting," says Friedrich. "We get lots of people from Windsor and Falmouth, and more and more from Wolfville and Halifax."

Friedrich and Buranello's dedication to the local area and Nova Scotian wine is remarkable for a couple with history in South Africa, California, Montreal and Toronto. As so many who move out east express, it was a moment of falling in love.

"We were looking out on the valley at Luckett" Vineyards, recalls Buranello. "You know, looking at Cape Blomidon. Tidal Bay was probably involved. And we said to each other, 'This is where we should be.'"