Bibimbap is the best brunch dish ever | The Coast Halifax

If you disagree, you’re not invited. 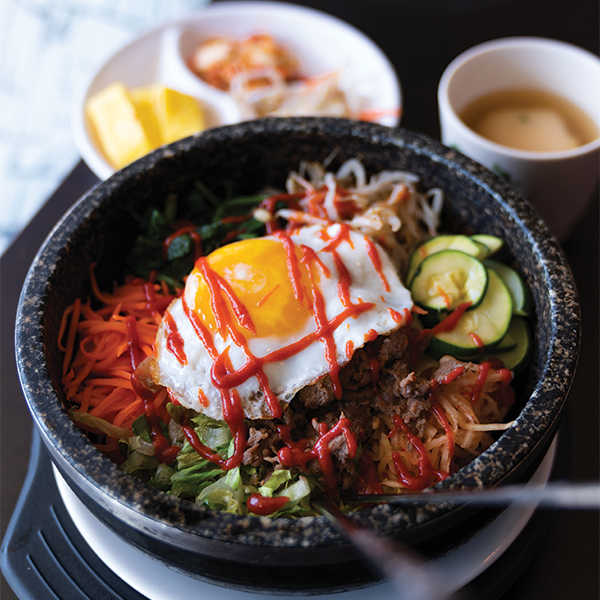 It's the weekend. Maybe you got to sleep in. That's great! Now you're ready for an egg. And carbs. And maybe some meat. It sounds like you need the best brunch on the damned planet: Bibimbap.

That delicious Korean dish (in a regular bowl or a piping-hot stone one) has all the elements of a diner breakfast special if they had somehow been elevated in both deliciousness and nutrition. Bibimbap's got way less of a post-brunch comedown, there's no gut rot from one too many cups of coffee or one too many links of breakfast sausage. Instead, rice replaces the home fries and toast, luscious marinated beef subs in for bacon and a perfectly fried sunny egg takes over for the weird thing that diners do when you ask for scrambled eggs and get like a fried egg chopped up? What the hell, folks!

Swap the limp half orange slice for steamed spinach, daikon radish, bean sprouts, zucchini, julienned carrots and kimchi. And bibimbap sauce—a spicy-sweet mixture of gochujang (Korean chili paste), sesame oil and seeds, sugar, rice vinegar and garlic—knocks ketchup out of the stratosphere. Not for nothing but it's also far easier to make at home for a crowd than eggs Benny.

The concept of typical brunch seems maybe a bit too narrow. Maybe that's why it draws so much criticism, which admittedly is easy enough to do—ubiquitous jokes about bougie people lining up down the street for an overpriced egg or avocado toast, tables full of tipsy yuppies laughing too loudly over mimosas, FrankenCaesars with Cromwell-like spikes sticking out at all angles served with towering piles of French toast and...ice cream? And is that Nutella?

But who sets these arbitrary brunch rules if not we, the people? God knows there are enough stupid rules as it is, it's about time to bust open the floodgates and make everything brunch (especially bibimbap, duh).

In Korea, a traditional breakfast is a lot like lunch and dinner. It's delicious and non-restrictive. There's usually soup! Vegetables at brunch is 100 percent what your nutritionist would want for you. Round up your brunch crew (is this a thing?) and do it. Guaranteed you won't have to wait in a line on the sidewalk at spots like Song's on Quinpool, Arirang in Clayton Park or Barrington Street's Gangnam Korean BBQ. Just remember, if they hesitate, they are boring and should be disinvited. Bibimbap is the best non-brunch brunch.