With summer around the corner we’re pining for Pétillant Naturel a cloudy, small-batch natural wine that critics say is here to stay. 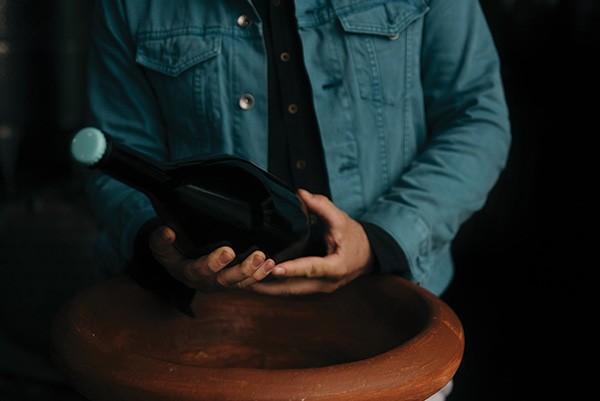 It sounds like the most natural thing in the world.

"You're harvesting grapes, pressing them in whole clusters, letting the juice sit, and the ferment starts," explains Bruce Ewert. "When the sugar gets to a level that I know would produce bubbles, it's bottled."

Ewert, at l'Acadie Vineyards, a Gaspereau Valley organic winery that specializes in sparkling wine, is talking about a new style for our region. Pétillant Naturel, a trendy wine heartily guzzled by traditional winemakers and urban hipsters alike, comes in Champagne bottles topped with a beer bottle cap. Better known as Pét-Nat, it is slightly fizzy, often on the sweet side and cloudy. It is made in small batches, using a relatively quick process and no two bottles will ever be exactly the same because the wine is quite literally bottled alive.

"It's risky," says Ewert. "Doing a wild ferment…there's possibilities of organisms competing," disturbing the desired fermentation, which relies only on yeast that collects naturally on the grapes and in the vineyard and winery environment.

Nova Scotian winemakers have been crafting elegant, precise sparkling wine in the labour-intensive style of Champagne for 15 years, and now they are trying something different, concocting a small quantity of commercially available Pét-Nat for us to sample. L'Acadie Vineyards' Pét-Nat—a 2017 vintage made from estate l'Acadie Blanc—will be available early June.

Pétillant Naturel is a sub-category of , a wine style rigorously regulated by appellation law in some regions in France. But Pét-Nat was born for the simple enjoyment of its creators: A quick-and-dirty, easy-drinking beverage that varies broadly in technique and taste, resisting rules and definition.

"It's fun to experiment with a traditional style," says Benjamin Bridge assistant winemaker Alex Morozov. The Gaspereau Valley sparkling wine house will release its 2017 Pétillant Naturel, made from Geisenheim, in early July. "Winemakers are making it for themselves."

Pét-Nat traps in a bottle the whole process of making wine. Because it does so in wine's simplest form, with nothing added (no yeast, sugar or preservatives) and nothing away (sediment stays, and even some carbon dioxide remains), this effervescent party wine is a very real, raw reflection of wine of a particular time. It rides the wave of a movement that is slowly expanding around the wine world, sinking sure and shameless roots into the hearts of wine lovers.

submitted
Benjamin Bridge's Pét-Nat
Natural or low-intervention wine is made from grapes that have been farmed organically, biodynamically, or with the intention to emulate one of the two. Nothing is added at the time of harvest and crush, and indigenous yeasts do the fermenting. The wine is never filtered or fined—the process of using proteins or clays to strip suspended sediment to make wine look and taste cleaner—so wine has added texture. Oxygen is allowed contact with the juice, giving the wine a rustier, earthier taste, and sulfur—which is found naturally in all wine—is added in very small quantities if necessary later in the process. Because it is so full of organic matter and so lacking in preservatives, natural wine needs to be shipped and stored properly.

Natural wine has attracted critics who challenge the word "natural," a descriptor regularly co-opted in food marketing that has come to mean nothing, and who question the lack of regulation in low-intervention winemaking. Instead of rules, natural wine demands of winemakers an instinctual sense of their land, fruit and equipment, and to be focused, and restrained.

Ewert, who has been making wine for more than 30 years, puts it this way: "You have to know a lot to do little."

The team at Benjamin Bridge describe a similar balance of scrutiny and giving up control. Keltie MacNeill, Benjamin Bridge Club manager, shows pictures of the daily measurement of Pét-Nat's specific gravity—evaluating its alcohol content before bottling so carbonation doesn't get out of control.

And in the vineyard, "no more mowing and being pristine," says MacNeill.

"But plant health doesn't just happen because you want it to," says Campbell.

MacNeill adds, "We're becoming sure of our terroir…"

"…And with knowledge of self, then we can diverge, take the next steps," finishes Campbell, explaining how the winery takes the leap from clean, exact traditional method bubbly to Pét-Nat, a style that defies precision.

Jessica Emin
Heather Rankin
Heather Rankin, sommelier, wine judge and owner of Obladee, A Wine Bar, describes a similar leap to natural wine, one required of those at the receiving end of the industry.

"Our customers are customers; they're discerning, they're not throwing money around," she explains. "Natural wine is more expensive, and people demand to know why."

"There's an absence of stuff that makes it tasty," says Rankin. Natural wine "is less rounded out, less sweetness and spice, less make-up. It's more savoury and earthy, with pure fruit elements, and right away, that's different for people."

She thinks for a moment.

"It's like eating raw chocolate versus a Mars bar."

Rankin carries natural wines at Obladee mostly as "an educational tool, an explorative mechanism… If we can explain what it is, people are interested."

It is understandable that a wine bar would list products representing the latest fad, even if they're harder to sell. But a conversation with Rankin reveals there's more at stake.

"It's no different than eating better food, knowing I'm consuming a more healthful product," she says. "What I like most about natural wine is the transparency aspect," citing the culture that natural winemakers reveal everything they put in their wine—which is not much, considering the 200-odd additives now used in wine.

"The added benefits are supporting sustainable agriculture, and, because at the moment wine is made by smaller wineries, supporting that model of business."

And anyway, Rankin doesn't believe natural wine is a fad.

"It's not a trend. We're in the process of reshaping wine. Like slow food, it's here to stay."

And luckily, Nova Scotians who want to make a move toward natural wine have to leap too far.

"Local Pét-Nats are accessible, due to the types of grapes here," she says. "Our hybrid grapes have fruity, aromatic compounds that rend themselves to the style. The fruit is still toned down, but very nice."

The emergence of natural wine in Nova Scotia may begin to demand of us the same care that it requires of its makers. This means asking questions about how grapes are farmed, what is added to and taken away from wine and how it is handled and stored.

"What are the winemaking and growing philosophies?" Rankin suggests we because these make a difference in the way a wine tastes and how it makes you feel.

"There has to be a real human being behind that wine."

And underneath the human, reminds Ewert, there's earth.

"It's really about terroir, encouraging living soil, for us, seabed soil," he says. "All those beautiful flavours are there."