Revenue streams have dried up for Nicholas Kingsland, all thanks to the social media giant's crackdown on fake news.

VIA iSTOCK
“This is not a joke,” Kingsland writes on Facebook. “I have 10 pages with around 1.5 million likes altogether. All my websites now get no traffic.”

For the past three years, Nicholas Kingsland has made his income sharing hyper-partisan news stories about American politics on social media.

His livelihood involves spreading polarizing content across multiple Facebook pages to an easily riled, mostly right-wing audience—generating revenue by sharing links and driving high volumes of traffic to other websites.

But Kingsland isn’t mining this pro-Trump content from Macedonia or Nigeria or Kosovo. He lives right here in Halifax, and—until recently—he’s been doing pretty well for himself.

At its height, the Haligonian estimates his online reach was around 20 million people. His Trump2020 Facebook page alone has over 70,000 followers. But those numbers are shrinking.

Facebook’s efforts to crack down on hyper-partisan publishers has dried up his revenue streams, putting Kingsland out of his apartment and at risk of losing his car.

“All my websites now get no traffic,” he writes in a recent post. “All the pages are completely demonetized.”

Verifying these claims is tricky, given Kingsland’s guarded nature about his work. Over the course of a 20-minute phone call, he confirmed the Trump2020 page was his own and discussed his business model, but wouldn’t disclose how much money he was making or other specifics about his work.

The Haligonian reached out about his plight, hoping the media would be interested in a David versus Goliath tale about free speech. Despite initiating contact and twice asking if we’d pay for his story, Kingsland ultimately decided The Coast wasn’t a big enough platform to help his cause.

“The whole point is so I can benefit in some way, shape or form,” he says. “For you to get this story in a little newspaper is not going to help me.”

Kingsland hung up when asked to confirm the spelling of his last name, as it appears in his email address and other online information. 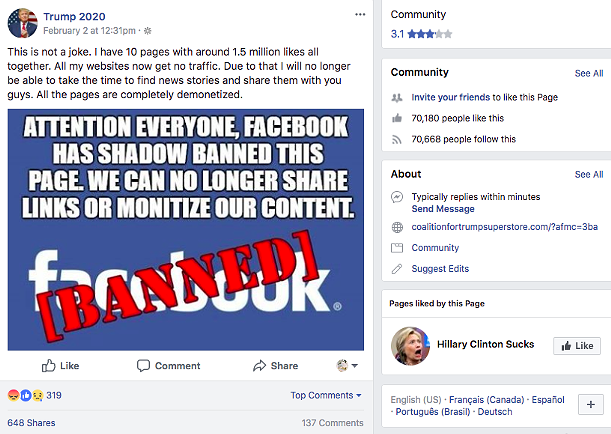 VIA FACEBOOK
“Trump was right! Look what Obama’s top advisor just admitted. MAKE THIS GO VIRAL,” reads one headline from USAfastnews.net Kingsland shared on his Trump2020 Facebook page (since deleted). Above the post, he writes, “Do you want to see Obama in jail? Comment yes or no.”

By his own estimation, Kingsland is one of the only Canadians active in this global micro-industry, transforming aggravated political ignorance into pocket change.

“I’m not aware of a lot of full-time people in a kind of developed country like Canada that  making their living doing this,” he says. “They’re in Kosovo. They’re in Vietnam because the economics are much more favourable...For them, just a few hundred dollars a month in US funds is huge.”

Silverman originally coined the term “fake news” back in 2014 and has spent the last few years continually researching media accuracy and transparency in the post-truth age of Donald Trump. It’s a booming market.

The massive social platform Facebook provides for false and outlandish information—often published by overseas writers solely to reap ad revenue—has caused intense scrutiny from members of the public and government policymakers debating what responsibility the social media company has to the truth.

Democratic Institutions minister Karina Gould recently advised Facebook to better address the spreading of misinformation on its site, stating social media sites have a “significant influence when it comes to shaping the public discourse.”

In response to its critics, Facebook announced plans in late 2016 to begin weeding out the glut of false and misleading information on its pages. Culprits see their pages deleted or their followers “shadow banned.”

Kingsland, however, argues Facebook is taking money out of the hands of impoverished small business owners like himself.

“When people write articles on Facebook and they make money, that money goes into the local economy,” he says. “When Facebook shuts these people down...basically what it’s doing is saying the American people are too dumb to make a decision for themselves, and the other thing it’s doing is killing people overseas.”

“If Facebook ends up deciding to change the rules on people, Facebook has the ability to do that.”

Silverman says it’s common for partisan news pages targeted by Facebook to try and rally support in order to get reinstated. Rarely, though, does that succeed. Usually, they just have to start over.

“To be honest, for a lot of publishers in these areas, they just view it as a part of doing this kind of business.”

But Kingsland feels Facebook isn’t playing fair. The company appears to be actively discriminating against his conservative pages, he says. All the non-political and left-leaning pages he runs (including an Oprah for president group) aren’t getting shut down.

It’s a common suspicion amongst right-wing, hyper-partisan publishers, says Silverman, but a difficult bias to prove.

“Look, at the end of the day, it’s Facebook’s platform,” says Silverman. “If Facebook ends up deciding to change the rules on people, Facebook has the ability to do that. It may seem unfair, and it may outrage a lot of people, but at the end of the day you’re working, you’re making your living off of Facebook.”

Reached over email, Kingsland was uninterested in discussing the new direction for his online brand.

“I will not deal with you or anyone you know unless you pay me,” he writes. “Have a great day.”