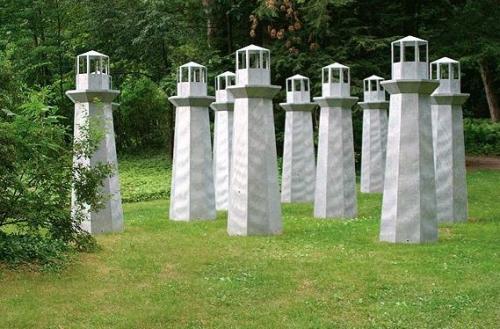 A model of Sandy Graham's lighthouses.

On Friday night, a group of architects, politicians and other art-minded people gathered in the exhibition room of Dal's Faculty of Architecture and Planning for the announcement of the Trillium Public Art Competition. Ironically, the first commission under the city's new public art policy was initiated by a developer, W.M. Fares Group—the piece will sit in front of their live/work condos, The Trillium—and facilitated through the Planning & Design Centre, a non-profit organization focused on improving design in the city. Personally I don't have a problem with the private sector taking the lead, if that's what it takes, and I commend Wadih Fares for putting full trust in a jury. But he had nothing to worry about, really—I'd trust this group with my public art needs: Frank Palermo (chair, architecture faculty), Doug Bamford (artist), Peter Dykhuis (Dal art gallery director/curator), Sarah Fillmore (acting curator, AGNS), Andrew Terris (arts consultant) and Roy Willwerth (architect).

The jury deliberated through 37 entries from around the world, narrowing it down to three selections. The entries were nameless, so there was no artist favoritism. In the end, the jury picked Sandy Graham's (Dartmouth) entry over Jonathan Leahey's (Australia) eight-metre-tall airplane, which I liked for its simplicity but the fact that the plane's nose is embedded in the ground might be a little touchy for anyone who hates to fly or remembers Swiss Air. It's interesting that Leahey is acknowledging air travel in a port town, though. Lance Decker's (Baltimore) minimal, precise egg-like sphere relies on lighting to give the illusion of blossoming, but I really liked Graham's seven lighthouses, constructed out of galvanized steel. Normally I would question overrused Maritime motifs, but there's something about seeing the group of them together, out of their marine context, that comes across as joyful and timeless.

Graham was so sure he didn't win the competition, he wasn't even there when the announcement was made—he was picking up his daughter from day care. A man of few words, he acknowledged how rare it is that artists "find opportunities and sites for their work." Frank Palermo had a lot to say though, especially about the role of public art as a means of stimulating public discussion, as a meeting place and as a snapshot of "who we are, and where we've been."

The installation of the sculpture is expected in 2010, but in the meantime, all of the entries and models of the top three selections are on display in the exhibition room until June 7, or you can see them here.