Last Bites: After writing for eight years about food, Liz Feltham has decided to hand in her knife and fork as The Coast's prima reviewer. 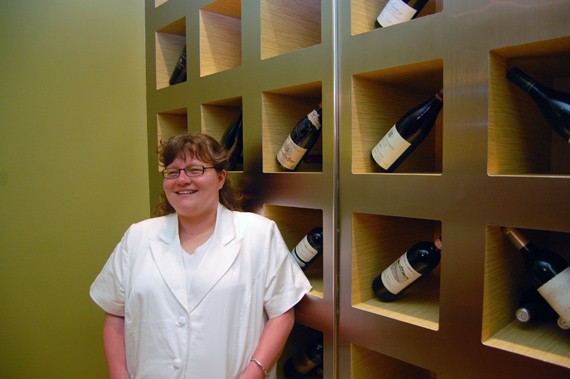 I'm full. The meal has been great, but the table's been cleared and it's time to push the chair back, get up and walk away. Eight years of reviewing restaurants and writing about food for this paper has been an incredible experience, but now it's time to move on, revitalize my jaded palate and see where else my taste buds will take me.

Twists and turns in my life landed me in many different places, including behind the stove as a professional cook, but writing has always been my true passion. In 2001, I hadn't long returned from a cooking stint in the Yukon, and was just settling back into the Halifax kitchen scene when I saw an ad in The Coast looking for a new food writer. Food writing seemed like a great opportunity to combine my two loves, cooking and writing. So began my journey with The Coast.

The first place I reviewed was Boondocks in Eastern Passage. I was so nervous---I was convinced they would know who I was and why I was there. Didn't take long to settle into a comfort zone as I went to more and more places, and I began to feel a rush of adrenaline whenever I picked up a menu. Each one offered the possibility of a truly great meal. Sometimes yes, more often no, but the excitement never faded.

Back in 2001, I interviewed Scott London, Halifax's only working sommelier. That's changed---the only reason there aren't more career sommeliers today is because there aren't enough wine-focused restaurants to supply jobs. The Nova Scotia wine industry has raised its own bar, garnered international attention, and boasts 10 producing wineries ready to give Niagara and the Okanagan runs for their grape money.

In 2002, Pitchman's Pub (now Bubbles Mansion) and Stayner's Wharf tried to go smoke free, and failed---just a little too ahead of their time.

Because reviewing has allowed me to eat out so frequently at such diverse places, I've come to appreciate the value of excellent service at any venue. Over the years, I've had the privilege to be waited on by exceptional people who are worth their weight in gold to any establishment. But three of those genuine, guest-oriented, outstanding professionals come to mind immediately, encountered at three vastly different eateries: Jenny the breakfast drive-thru girl at the McDonald's on Kempt Road---I've never seen her without a smile and a pleasant good morning or a please and a thank you at every interaction. When I visited the Surfside Inn early on, I thought Rena must have been the owner, such was her attentiveness and personal interest in our experience. Her warmth and charm stuck with us. And Avery at the Five Fisherman, the embodiment of peak service for fine dining.

I've encountered memorable owners, too, like Jane Wright (jane's on the common) and Tammy Fredericks (Fredie's Fabulous Fishhouse), who know what it takes to provide a great experience for the diner and, especially, how to look after your staff as well as your customer.

Chef-owners who have carved out a path for themselves and their patrons often made me long to return to the kitchen. This includes Dennis Johnston and his wife Monica Bauché, who make a formidable duo, giving Fid a one-two punch---outstanding service coupled with extraordinary food.

Another of my culinary heroes is Tempest's Michael Howell. Howell elevates locally sourced produce to otherworldly delights and has worked tirelessly to raise the profile of Nova Scotian food around the world.

I've had some incredible meals that for whatever reason, stayed with me a long time afterwards. To those cooks, those unsung heroes, who toil to put the food out there every day, still grossly underpaid and ridiculously overworked, for them I reserve the highest praise.

Vegetarian and vegan friendly, sustainable, local, organic, all-night, have joined take-out and delivery as descriptors. And with the return to eating local, as our forefathers did, the cycle has come full circle.

The Coast has provided me with a public forum in which to express my love of food and personal experiences in the city's restaurants; because food is perhaps the most subjective thing one can ever review, controversy is sometimes generated over what I've written. For a writer, any time you can evoke a response from a reader is deeply satisfying. Strong feelings, either of agreement or disagreement, often find their way into my inbox, but the well-thought-out, carefully written arguments of why I'm wrong have always been responded to and appreciated. Because of the subjectivity of taste, the factors inherent in a restaurant visit, your experience might vary vastly from mine, even on the same night, and that's fine. Thank you to those who've shared their opinions without resorting to name-calling and insults; and thank you to those who've written me to agree or support what I've said.

I've been asked lots of questions: no, The Coast does not pay for my meals, only for the articles. No, restaurants do not know I am coming; I do not accept meals or gifts. Nobody can call and "schedule" a review. Yes, I include negative points in my reviews because I am relating my own experiences. If I leave out any negative experiences, then my writing becomes advertorial, not review. My favourite places depend on my mood, and the "best" or "worst" are so subjective that I won't use them to describe restaurants as a whole.

Finally, as I go burping gently into this good night, I have to thank Kyle Shaw for taking a chance on a rookie writer and all the fabulous editors I've worked with over the years, but most especially Stephanie Domet, my first editor---the one who gently drew out my writer's voice---to her, I attribute much of my success.

My current editor, Andy Murdoch, is set to take the Coast food section into new and exciting directions---don't miss an issue. And to all those who've ever suffered as my dining partner, being told what to order, what to eat, and what to drink---thank you. But now it's your turn to buy.