Johnson is sitting in Java Blend on a rainy Monday. Five days ago she was in Toronto, being named the winner of the Sobey Art Award, a $50,000 purse that's been awarded to a contemporary Canadian artist every year since 2001, but never to someone on this coast.

"We're so under-represented in the national dialogue with regards to art, theatre, any type of cultural programming, music. Think about how many opera houses we have in the Atlantic region—there's one," says Johnson. "It's this feeling of wanting more—and I really try not to use the word exposure—but to have more coverage, or a broader reach with regards to the artists and cultural workers that we have in our region. It's a weird thing—you're happy to be the first, but really, it shouldn't be the first."

Johnson is only 37, but she's been making an artistic impact for most of her adult life, starting in Eskasoni, through her time at NSCAD and as a practicing multidisciplinary artist in Halifax. Her work—which combines traditional Mi'kmaq basket-weaving with performance, sculpture and installation; her 2010 Nocturne piece Elmiet was a symbolic scalping of her herself—is probing and provocative, requiring a lot of herself.

"I like to push the boundaries with regards to that strain," she says. "How far can I go where it's just too far, but not too far that I can't undo any type of damage I've done to myself?"

Next she's off to the Banff Centre for the Arts. As for the Sobey money, it'll go to art debts, new gear and renting a cottage so her wife can be close by when Johnson's working in Kejimkujik National Park in the summer. 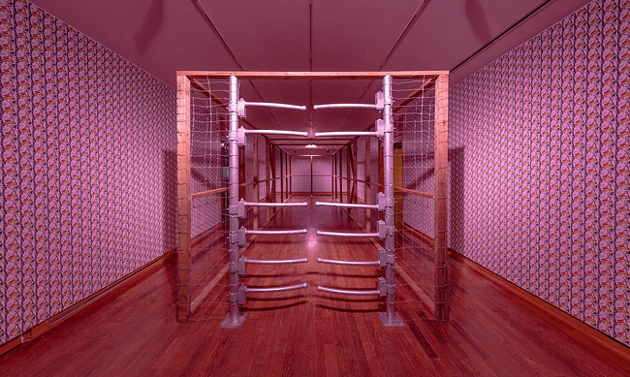 Submitted
Johnson’s “Moose Fence” is part of her winning work.