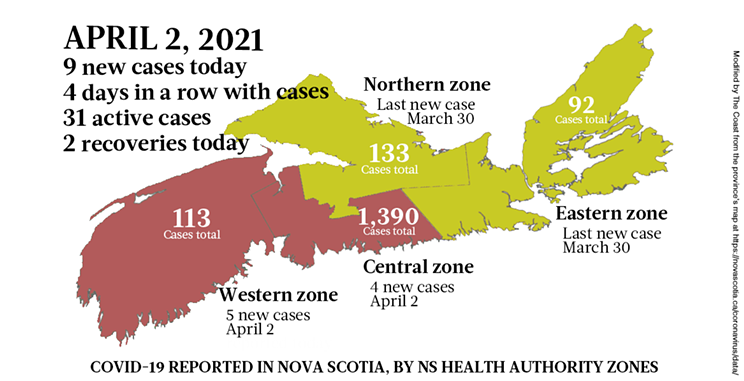 According to Nova Scotia’s COVID-19 stats, the coronavirus forgot to take the day off.

Even if you have the day off this Friday of the Easter long weekend, COVID-19 doesn't. The province is announcing nine new infections in today's C19 report, the most in a day since the 10-case Friday, February 26, which triggered a one-week lockdown.

"Five cases are in Western Zone and four cases are in Central Zone," says the provincial report. "Five of the nine are a group of international travellers. The remaining are domestic travellers from outside Atlantic Canada. They are all self-isolating, as required."

Calling most of the patients "a group of international travellers" definitely takes the sting out of today's high number of infections. You can picture a happy family or an earnest choir—better yet, a cheerfully dedicated singing family, arrived in Nova Scotia from the Austrian Alps, singing The Sound of Music medleys while they quarantine together in a forest cottage, far from anyone else they might infect. Too bad these itinerant infectees aren't that kind of group at all.

Our table at the bottom of this post puts together data that's a few clicks out of sight at the province's C19 information dashboard. If a group of five people went into quarantine together after getting back from some other country, then went for testing together before getting their positive diagnoses together, they'd show up in the table as five new infections in one community health network. Instead, for the five new cases in the Western zone, the table locates one case in the Lunenburg community network (think south shore), three cases in the Wolfville network (Annapolis Valley) and one case floating some indeterminate place in the region (Yarmouth, Wolfville or Lunenburg) because the patient hasn't been connected to a postal code yet.

Meanwhile the four cases in the Central zone are divided between the Halifax network (one case), the Eastern Shore network (two cases, the area's first infections since the province made community network numbers public on January 20) and a fourth postal code-less patient who could be anywhere in the Central region.

Five of the today's nine new C19 patients may have been travelling together outside Canada, but when they got to Nova Scotia they fanned out to at least two different communities. Maybe all five scrupulously avoided contact with anyone on their way to quarantine and there's no chance of them spreading C19 in the province, maybe they didn't. But the province encouraging the public to think of them as a single unit, rather than five infected individuals, feels like a deliberate downplaying of the risk.

Only two people recovered from their C19 infections since yesterday's report, so with the nine new cases the province's active case number increased by seven to 31 active cases. The last time Nova Scotia had that many active cases was Friday, March 5, four weeks ago today.

In other numbers, provincial labs processed 3,122 Nova Scotian tests yesterday—that's an average rate for the last week—and 4,780 vaccinations were administered, slightly above the recent average of 4,400 daily doses. One Nova Scotian is in the hospital because of C19. And the provincial state of emergency was extended for the umpteenth times since it was first called on March 22, 2020.

"Our Easter weekend is looking very different than those in other provinces because of our low active case numbers, and today's cases show our border protocols are working," premier Iain Rankin says in today's report. "But we have to remain vigilant—including strictly adhering to self-isolation after travel and other public health measures—to remain safe."

Where Nova Scotia’s COVID-19 cases are on Friday, April 2