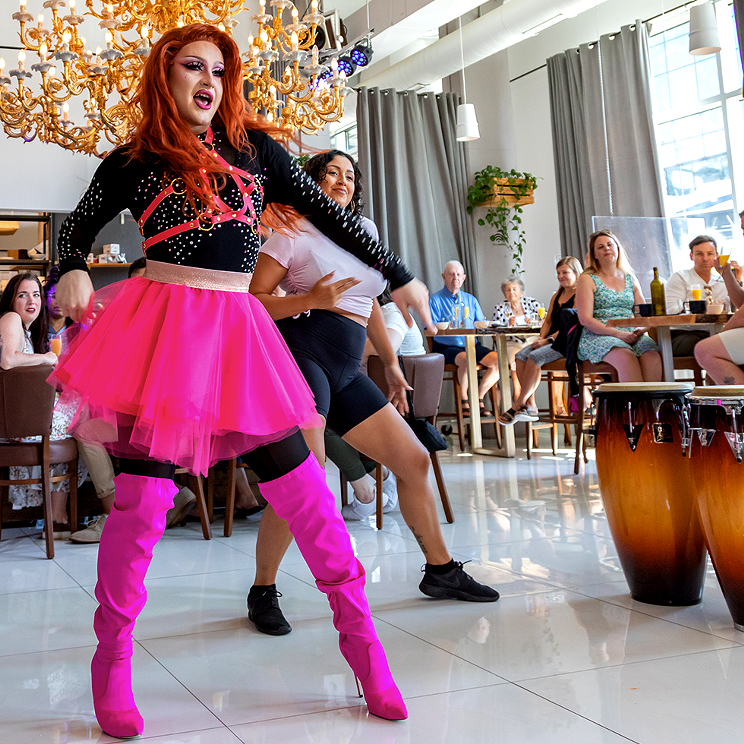 submitted
Experience Brunch at The Garden with queens including Zara Matrix, Lavender Steel and Farrah Moanz.

It’s that time of year again: Pride festivities are taking over the city. After several months of no live shows and pandemic restrictions, the 2021 Halifax Pride Festival is ready to bring back in-person celebrations for 10 days of festivities—and numerous performers are ready to get back on stage.

“I think seeing people and having that interaction in person just makes such a difference,” Brad Keeping-Myra, who performs as Zara Matrix, says. “It’ll be really awesome just to have everybody there together celebrating again.”

Thanks for the memoriez, Menz & Mollyz: Paying tribute to the city's quintessential gay bar as Halifax navigates Pride without it.

Remembering Menz & Mollyz: One of the hardest-hitting casualties of COVID-19 is the city's most legendary gay bar.

For the past year, Keeping-Myra has been producing his own drag shows at The Garden in downtown Halifax; it’s one of the city’s few spaces that has welcomed the 2SLGBTQ+ community and drag shows after the shuttering of businesses such as Menz & Mollyz.

Between Aug. 12 and 22, The Garden is offering a special Pride drink where a $1 from every purchase will go towards the Youth Project, a non-profit dedicated to supporting youth with issues surrounding gender identity and sexual orientation.

“Whenever folks that have accessed the Youth Project’s support and are offering us support in their adulthood, it’s such a beautiful, full-circle moment,” says the non-profit’s executive director Carmel Farahbakhsh.

This year’s Pride Festival is chock-full of events, and there’s no shortage of drag performances for all audiences. Here, we list a few we’re extra excited about:

QTBIPOC Showcase
Drag artists and other performers will take the Pride Festival’s main stage at the Garrison Grounds on Saturday night. Hosted by Cynthia Stilts, get ready for some gag-worthy performances from some of the region’s top Black, Indigenous and other POC performers. Halifax Pride describes it best: “loud, proud and ready for a crowd. Melanated and ready to celebrate it.”
Fri, Aug 13, 9pm-midnight, Garrison Grounds, 5425 Sackville Street, by donation, halifaxpride.com

Oldies but Goodies Bingo
This is one bingo night you’re not going to want to miss: Zara Matrix says there are tons of local prizes to be won as well as classic tunes everyone will know and love. Local businesses such as Sprout Therapy, King of Donair, Kent and Revitalize Laser have provided sickening prizes, and attendees will have two cards (with an option to buy more) to play their chances.
Wed, Aug 18, 8pm, The Garden, 1446 Queen Street, $30, event

Digitally Queer
Drag performers Craven Blood and Rouge Fatale are co-hosting this sick showcase to take the Pride celebrations virtual. It’ll be a night full of drag, burlesque, clown, spoken word and more. Audiences will be encouraged to turn on their cameras, play some games and enjoy an evening with local performers including Teo Ferguson, MissShapen and April Hubbard.
Thu, Aug 19, 8-10pm, Zoom, Free, event

Superheroes
Zara Matrix’s final show for this year’s Pride Festival will feature a variety of drag artists performing to music that’s meaningful to themselves and their life journey. Local drag superheroes including Saturn, Bunni Lapin and X will take over The Garden celebrating their favourite icons, Pride anthems and gay heroes.
Sat, Aug 21, 8pm, The Garden, 1446 Queen Street, $20, event