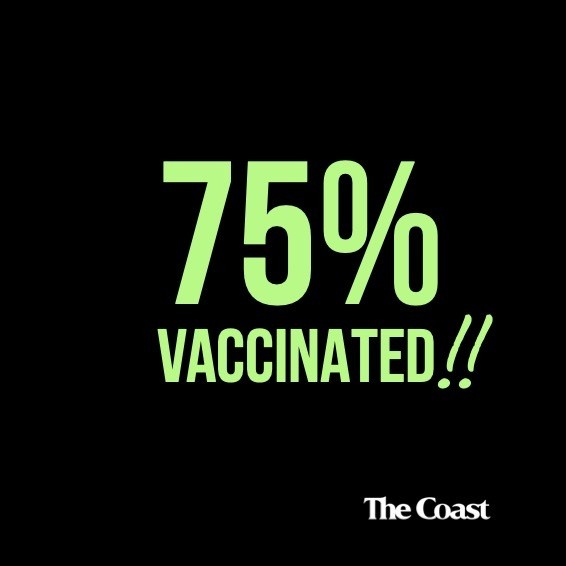 This time, it's official.

With the vaccination numbers announced Monday, October 4, Nova Scotia has passed having 75 percent of its entire population fully vaccinated against COVID with both doses of vaccine.

We went from 74.96% Friday—so so close!—to 75.16% Monday. These figures are based on statistics the province publishes publicly.

These numbers do NOT include a group affectionately known as Strang's army, the approximately 9,000 vaccinated Nova Scotians in the Canadian Armed Forces who aren't counted by the provincial system, but are routinely cited by top doc Doctor Strang when Nova Scotia is approaching a vaccination milestone.

Nova Scotia set a target of 75% fully vaxxed for being able to move on from Phase 4 reopening. It was 11 days ago that we passed 75% vaxxed *with* Strang's army, so were eligible to move to the next reopening phase. But a surge of fourth-wave COVID infections delayed reopening until, coincidentally, today, Oct 4. Nova Scotia entered a "modified Phase 5" this morning, where places like restaurants and gyms have no restrictions on the number of customers allowed in—as long as those customers provide proof of vaccination (POV)—but house parties and other "informal gatherings" are still limited to a maximum of 25 people indoors.