7 reasons to trade your sandals for sneakers this summer

On your mark, get set…go get ’em tiger. 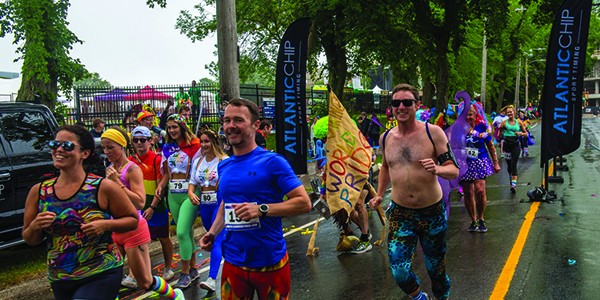 OUT OF TOWN
June 23
Wine & Dash
Brigadoon Village's fifth annual fundraiser combines cardio with Nova Scotia wine country. Runners start at Benjamin Bridge and make their way to Lightfoot & Wolfville, sampling some of the Valley's best bottles along the route. The five-kilometre run makes three tasting stops, while the 10 kilometre makes four (Benjamin Bridge, Gaspereau Vineyards, Domaine de Grand Pre and Lightfoot & Wolfville). Racers are encouraged to don their best '80s attire. Could this get any better? Maybe. If you'd rather skip the whole running part and focus on the drinking part, $100 gets you a ticket to the Tidal Bay Express bus tour. Just remember to pace yourself. Benjamin Bridge Winery, 1966 White Rock Road, Gaspereau, $75-$100, winedash.ca

July 1
Epic Canadian
When some of us are eating way too many hot dogs or plotting how many roadside fireworks we're going to shoot into oblivion, EPIC Canadian will be celebrating the true north strong and free with its annual patriotic race series. Join the runners (and walkers, you don't have to be hard core to partake) in five-kilometre and 10-kilometre races or pull a double-in-a-day (yup, the five and the 10). Graham's Cove, Dartmouth, $49-$125, epiccanadian.ca

OUT OF TOWN
July 6
Mud Hero
This obstacle course has runners of all speeds and abilities tackling twists, turns and next-level muck with both six- and 10-kilometre races. Head to Debert in clothing you don't really care about ever wearing again and prepare to climb, crawl, splash and sprint your way through a wacky 18-plus obstacles and the World's Most Epic Mud Pit (their caps not ours). Debert Airfield, 266 Ventura Drive, Debert, $69, mudhero.com

OUT OF TOWN
July 12-14
Antigonish Highland Games
The annual showcase of Scottish culture returns to Antigonish for three days of highland dance, tug-of-war, road races and more. Get in on the cardio or witness the feats of physical strength—the heavy competitions, like caber toss farmers' walk and hammer throw, are super-intense. 20 Main Street, Antigonish, antigonishhighlandgames.ca

July 14
Tail Chase Rescue Run
If the idea of running five kilometres in blistering summer heat sounds ruff, think again, dog. The fun summer race is all about the pups, raising money for the Misfit Manor Dog Rescue Society. Run hard with the suffering fur babes in mind, or bring yours along for a little dog-friendly walk in the park. Shubie Park Fairbanks Centre, Locks Road, Dartmouth, 7:30am, $30-$40, tailchaserunning@gmail.com

July 20
Rainbow Pride Run
This colourful five-kilometre race calls itself "fast, fun and fabulous" and we call it a warm-up for the pinnacle of Halifax Pride—the parade. This annual race, presented by Pride and the North End Runners, follows the same route that all of the floats will later that morning, kicking off just before the festivities and functioning as the biggest crowd hype squad ever. Anyone walking the race will join the "sexy pacers" in merging with the parade. Garrison Grounds, 5425 Sackville St, 12:30pm, $25, raceroster.com

OUT OF TOWN
August 4
Not Since Moses
A summer event of biblical proportions, this series of races (5K, 10K, youth basket run) draws runners to heaven (AKA Five Islands) to challenge mother earth and the highest tides in the world. The guaranteed fun event finds a day every summer where the Bay of Fundy's tides will be low enough for long enough (and safe, don't worry) for over 800 runners to pound the ocean floor instead of the pavement for once. Rocks, barnacles and loads to mud make this route an unforgettable one—not to mention the picturesque backdrop. Five Islands, $65, notsincemoses.com