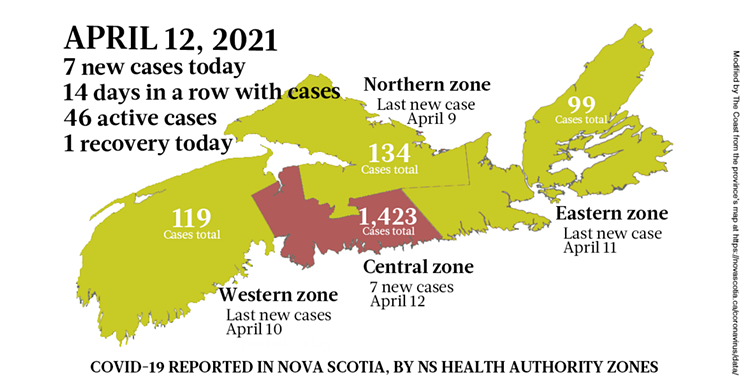 We need to keep this report short and number-focused today—and for the rest of the week—because we're working on a huge story about Northwood long-term care facility that comes out Thursday, and it needs all of our attention.

If The Coast had a huge staff of reporters and editors like, for example, England's influential Guardian, we might have enough hands to share the work so epic investigations don't disrupt the regular day-to-day operations. But we don't have that staff. We have one editor (that's me) and a few reporters and a small stable of freelancers. So when we produce a piece of journalism for Halifax that wouldn't be out of place in The Guardian or The New York Times or The Globe and Mail—trust me, it's that good—that means shifting around our resources and something may suffer.

This week, our daily COVID-19 reports are definitely going to suffer.

This week, our daily COVID-19 reports are definitely going to suffer. They'll come out late, or very late. They are going to contain the basic numbers that the province releases every day, but probably won't have much in the way of analysis. And after the Northwood investigation, by acclaimed journalist Stephanie Nolen, is published online this Thursday, we're going to bring it out in a special print edition of The Coast the next Thursday, April 22, so these C19 reports aren't going to bounce back to full strength right away. But the facts will be accurate, the daily map and location table will be included, and we'll continue collecting information behind the scenes to have the accurate trend information to share with you when we are once again able to spend time analyzing Nova Scotia's pandemic situation.

Until then, we ask for your patience.

Now about those Monday numbers… The province is reporting seven new cases, all in the Central zone. "Five cases are related to travel outside Atlantic Canada," says Nova Scotia's daily report. "The people are self-isolating, as required. The other two cases are close contacts of previously reported cases."

This bring the number of active cases to 46, the highest yet for the province in 2021. Going back into 2020 (we can't help ourselves from doing some analysis), the last time there were more active cases was December 27, when the count was 48. Is our case count going to keep climbing past 48, to reach a mark earlier in December when the second wave of infection was really active in Nova Scotia? We'll know in the coming days, but 48 is definitely a mark we're aware of.

As in yesterday's report, today there are still three people in hospital with C19. The province completed 1,984 tests yesterday, which is exactly average for the past week (some analysis is so routine for us now, it's easy to add to the province's bare daily numbers).

And with the weekend over, today the province is reporting its vaccination count for Friday, Saturday and Sunday. Over the three days, 11,775 vaccines were injected into arms, which averages out to nearly 4,000 doses per day. A month ago, delivering 4,000 jabs in one day would seem like a lot (the daily average was around 1,200 back then). But Nova Scotia's come a long way since then, and last Thursday saw over 8,500 doses delivered, more than double the weekend's 4,000 daily tally. Clearly the weekend is still being used as a time to chill, not a time to keep up the fight.

Where Nova Scotia’s COVID-19 cases are on Monday, April 12