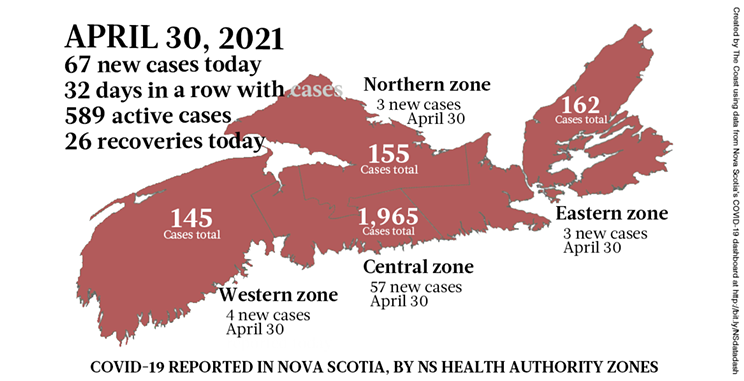 Today's COVID-19 report from the province doesn't just announce the same old stuff like new cases (67, down from yesterday), hospitalizations (22 in hospital, five of those in ICU, both numbers up from yesterday) and active cases (589, another record high). Today's report also conclusively proves the adage that it's possible to have too much of a good thing.

For weeks, if not months, Nova Scotia has encouraged its citizens to get tested for COVID, even if no symptoms are present. “Thousands and thousands of Nova Scotians have done what we have asked—get tested. Because of that, there currently is a large backlog in the lab of about three days,” top doc Robert Strang says in the report. “We need to expect high case numbers in the days ahead as the lab and public health get caught up.”

The backlog is about 45,000 tests, and as The Coast's full story about the situation explains, at recent rates that means over 400 positives are already in local labs, just waiting to be discovered. Now the province wants asymptomatic people to only get rapid testing at pop-up sites (here's where they are this weekend), leaving full testing for those with symptoms or solid exposure concerns. "Anyone else who already has an appointment booked should cancel it following instructions in their confirmation email."

What happened at Northwood?: How Nova Scotia failed its most vulnerable.
an exclusive coast investigation

Northwood also had a staff case earlier this week, and today The Coast has a story about it. We're sure you'll join us in hoping that none of this 45,000-test backlog turns out to be a resident at Northwood or any other nursing home, enduring the delay in waiting for the diagnosis to arrive.

Where Nova Scotia’s COVID-19 cases are on Friday, April 30