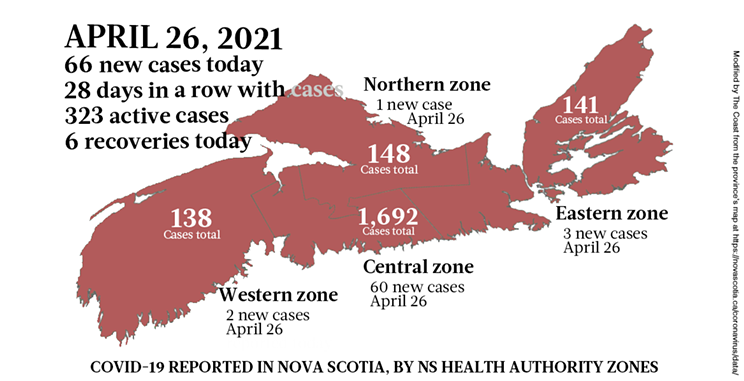 For the tenth day in a row, the number of active COVID-19 cases across the province has gone up. For the second day in a row, the current surge of infections has set a new record for most new cases in a day. This is the situation on the fourth day of lockdown in Nova Scotia's COVID third wave.

A surge of testing has come with the increase in infections: 11,335 tests were completed by local labs yesterday, a record high for one day, nearly double the current daily average. The number of people in hospitals is holding at five, as it's been since Saturday, but there are now two people in intensive care. These are the first ICU patients since March 16, or 40 days ago.

Halifax has only been locked down for four days, not enough time to take the edge off a disease that has an incubation period around 14 days, so today the province announced two further steps in restrictions.

The first is a further tightening of things in the rest of the province outside the lockdown zone (Halifax Regional Municipality and some surrounding areas). This builds on the travel and gathering restrictions announced yesterday by capping restaurants at 50 percent capacity, plus other stuff spelled out in the official announcement.

Halifax goes back into lockdown to fight community spread: The third wave has arrived, bringing with it four weeks of restrictions.

Short-staffed and with sick students, Halifax schools close for two weeks: The government will re-assess by May 7.


The second step is more radical: closing all public schools in the lockdown zone. The closure starts tomorrow, Tuesday, April 27 at 8am. Remote learning will begin this Thursday, April 29.


“Every decision we make for our schools is out of an abundance of caution and in consultation with public health,” says education and early childhood development minister Derek Mombourquette in the press release about the closure. "I know this will be difficult for some families, but Nova Scotians have shown time and time again that they’ll step up in our fight against this virus.”

Mombourquette is way off the mark with "difficult for some." This sucks pretty universally, and the province knows it. As top doc Robert Strang in the release, “The best place for children and youth is in school, for their social, physical and mental well-being.” It's also best for working adults not to pause their incomes and careers to do a bad job at preparing the next generation to meet the challenges the future holds. But apparently the disease has gotten bad enough for this option.

"With the number of community and school cases rising and the impact on students, teachers and staff, I support the decision to move to at home learning in the greater Halifax area, as an additional measure," says Strang. "If we all do our part, our kids may be able to return to the classroom soon.”

Where Nova Scotia’s COVID-19 cases are on Monday, April 26