6 new Halifax restaurants and cafes to get your mouth watering in 2023 | Food | Halifax, Nova Scotia | THE COAST

Photos: The Coast & Off The Eaten Path
Get the full scoop on the newest restaurants coming to Halifax in 2023.

Prep your palate for gourmet coffee and ice cream, Malaysian noodles and cozy bars in the New Year.

The Atlantic Ocean never rests—and neither does Halifax’s food scene. Our harbour city may be smaller than some of its Canadian peers, but damn if it doesn’t punch above its weight when it comes to dining out.

If you followed Halifax’s food happenings in 2022, it seemed like every other week arrived with the opening of a new neighbourhood gem, the re-opening of a beloved food institution or the expansion of a Halifax favourite. And 2023 promises to be as busy as ever.

Here at The Coast, we’ve got you covered with six new food and drink venues to whet your appetite in the New Year:

Halifax loves its coffee—and in East Cup Cafe, Haligonians might soon have a new Quinpool and Common area favourite. On the ground floor of The George condo residence and across Robie Street from the western edge of the Common, the specialty coffee bar is set to open its doors in early January. 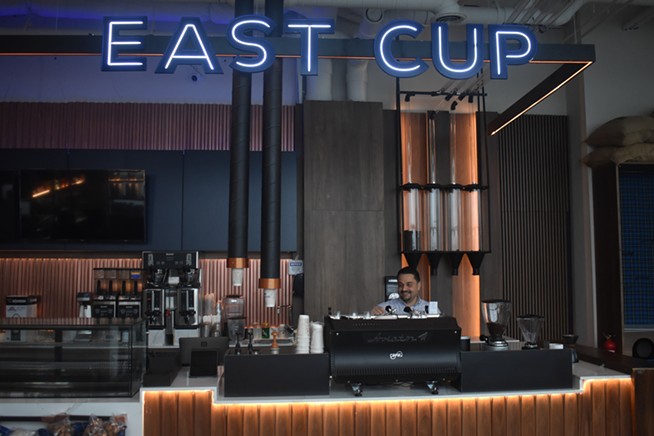 Photo: Martin Bauman / The Coast
East Cup Cafe co-owner Ahmad Issa preps an espresso for a visitor ahead of his cafe's 2023 grand opening.

Cafe co-owner Ahmad Issa takes his espresso seriously: On a rainy December afternoon, when a Coast reporter pops in for a pre-opening visit, he immediately hops behind the bar counter to prepare a fresh cup. “It’s strong,” he warns. Like the cafe surroundings, it’s also smooth and refined.

Freshness is the key, Issa tells The Coast. East Cup Cafe roasts all its own beans—you can see the roaster through big glass windows. The cafe also packs and roasts its own nuts, sourced from within Nova Scotia. Issa sees the cafe as one big tribute to the province—each coffee blend, he says, will be named after a different city or town. His favourite blend? “That will be Halifax.”

Steps from the waterfront at Queen’s Marque, Freehand Hospitality (a Halifax imprint of Oliver and Bonacini Restaurants) is prepping to open noodle bar Toridori—described as a “love affair with Asia’s diverse repertoire” of food creations, from Vietnam to Japan to Malaysia.

While the doors haven’t opened yet—and there’s no official word on when they will—the noodle hub took Halifax’s 2022 Asian Food & Culture Carnival by storm in May and offered up a mouthwatering trio: Heamul pajeon (crispy green onion and seafood pancakes), pork belly bao with szechuan cucumber salad and Hodu-gwaja (Korean walnut cakes with red bean paste). More of that, please.

Food giant O&B isn’t finished at the Queen’s Marque. After opening Drift, Bar Sofia and the Best of Halifax-winning Café Lunette in 2022, the Toronto-based restaurateurs are expanding their footprint with a soon-to-open dessert spot kitty-corner to the CSS Acadia (again, under the Freehand umbrella). Freehand says The Fog Company will be a “whimsical shop” that specializes in “traditional churned ice cream, soft serve and donuts.” The company’s been hiring for cooks, ice cream attendants and an on-site manager.

Photo: Martin Bauman / The Coast
The Fog Company is hiring staff in anticipation of its 2023 opening.

Still no word on when the doors will open, but the wallpaper is coming off the windows.

If you’ve found yourself on Barrington Street approaching Sackville Street in recent weeks, you’ll have come across the newest cafe and bar soon to open on the ground floor of The Jade apartments.

Mera Cafe + Bar’s über-minimalist vibe extends to its web presence—you won’t find any chef’s biographies or menu details on an “About” page—but a glimpse at the cafe’s Instagram profile offers a few more clues of what’s to come: Mera envisions itself as a place to “relax, reflect and refract” and has been networking with Port Williams’ Taproot Farms and Beausoleil Winery & Cidery to source local components for its food and drink menu.

Down the block and across the street on Barrington, in the former Attica Furnishings building, the “Italian love affair” Pazzo Ristorante & Enoteca promises to be “coming soon.” The latest offering from RCR Hospitality Group was initially set to open its door last year, but as of December’s end, renovations were still ongoing. Chalk that up to the challenges of working with a more-than-100-year-old building, RCR president Shannon Bruhm tells The Coast.

“Many of the attributes that make it attractive to us as a restaurant space don’t necessarily conform to present-day building codes,” Bruhm writes in an email. The team’s been working to double the floor structure’s capacity—all while preserving the building’s original tin ceiling and finishes.

Photo: Martin Bauman / The Coast
Completing renovations on Pazzo Ristorante & Enoteca is a "work in progress," but the restaurant will open in 2023, says RCR president Shannon Bruhm.

“It’s taking a lot longer than we would like, but we’re getting there,” Bruhm says, vowing that 2023 is the year. We can’t wait to see how it’ll turn out.

Sweet tooths, rejoice: The duo behind Filipina-Canadian baking business Xena’s Bread and Butter have finally opened their own brick-and-mortar shop on the edge of Halifax’s north end. Co-owners Mary Grace Firmeza and Kriselda Alvarez have built their reputation—and a loyal Halifax following—slinging home-baked sweets ranging from steamed buns to chocolate cookies to ube cream donuts (think soft, chewy and savoury-sweet, made with purple yams). And now, they’re ready for the big leagues.

Photo: Martin Bauman / The Coast
Ube donuts are a specialty at Xena's Bread and Butter.

After getting their start by baking for friends and family—a period of “trial and error” involving late nights in their apartment kitchen, Firmeza tells The Coast—the two found an early supporter in Dartmouth’s El Este Taqueria, where they began selling their sweets in November 2020.

The two also became mainstays at the Alderney Landing Farmer’s Market—and business boomed. Close to three years into their bakery side-hustle, the duo (who started as homecare workers) have taken their passion full-time. They opened their Brunswick Street doors for the first time on Dec. 22—a special day, Firmeza says.