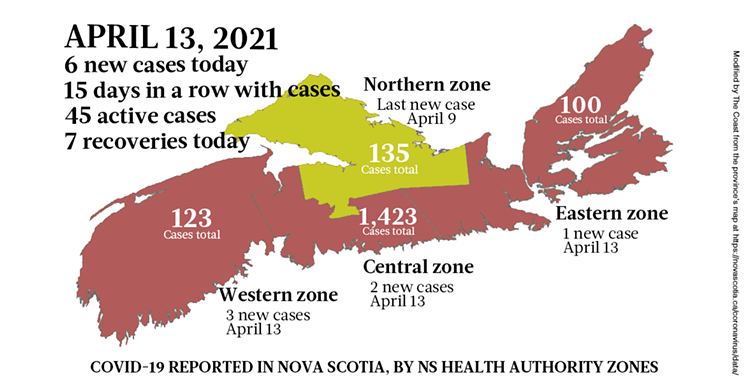 As we explained yesterday, with Stephanie Nolen's Northwood investigation about to be published, his week's updates about the province's pandemic numbers are going to be bare-bones. Today is a perfect example, with very little information beyond what the province provides.

Nova Scotia is reporting six new C19 cases in its daily press release, for a total of 45 active cases, three of those being patients hospitalized with the disease.

That's the raw information from the province. We've developed systems to do ongoing analysis of the province's numbers, so we can at least give some context to vaccination stats today.

That total number of doses injected since December doesn't mean much, but comparing to the previous total we find there were 7,467 doses delivered yesterday. That's a healthy number. On the weekend the province managed an average of about 4,000 daily injections, and Monday is almost double that rate; last week there were over 8,500 shots given on Thursday, but this Monday's (nearly) 7,500 is higher than last Monday (almost 3,000 doses), Tuesday (about 6,700) or Wednesday (also about 6,700).

Also, we should take time to point out that today's count of 45 active cases is a decline from yesterday's 46 cases. That number has been trending steadily up in recent weeks, so any drop is welcome. Meanwhile, New Brunswick's Edmundston outbreak has gotten bad enough that today Strankin announced today they are firming up Nova Scotia's border, reinstating the two-week quarantine on travellers from New Brunswick. That goes into effect Thursday, 8am.

Finally today, the province moved some cases around in its Panorama database. This happens occasionally, typically without notice beyond the province's data disclaimer: "As investigations are ongoing, postal codes may be updated resulting in assigning of cases to different zones." A result of this is the numbers changed on our map at the top of the page in ways that are not accounted for in today's case numbers. For example, the Northern health zone's total case count rose by one—from 134 yesterday to 135 today—even though there are no new infections there.

The total number of cases in the province hasn't changed in this redistribution.

Where Nova Scotia’s COVID-19 cases are on Tuesday, April 13