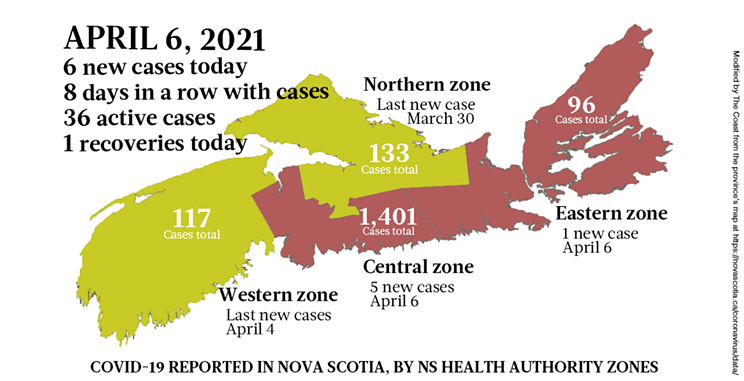 Strankin had their regular Tuesday briefing today, and it was full of exciting news that makes it sound like we're moving back to normal. Starting Wednesday at 8am, Nova Scotia's lifting any restrictions on visitors from Newfoundland and Labrador, meaning anyone in the Atlantic Bubble can come here without quarantining. Also Wednesday, malls, stores and gyms in Nova Scotia can open at their full, physically distanced capacity. And premier Iain Rankin reportedly talked about how well the vaccination program did over the Easter long weekend, saying 10,000 people got vaccinated despite it being a holiday.

Nevermind that Newfoundland hasn't dropped its quarantine restrictions for Nova Scotians or anyone else in the bubble. "As of November 25, 2020, all residents of the Atlantic Bubble are required to self-isolate for 14 days upon arrival to Newfoundland and Labrador," is the current situation, echoing New Brunswick's ongoing quarantine requirement. Nova Scotia is inviting everyone to a party, but who's going to come when it means self-isolating for two weeks when they go home?

And Rankin's vaccination numbers are way out of step with the numbers the province is putting out. Last Friday, the province's daily C19 update said as of Thursday, April 1, Nova Scotia has delivered 111,403 doses of vaccine since the rollout started in December. Vaccination data isn't reported on weekends, so it wasn't until Monday that we got a revised vax figure of 113,471 doses delivered as of Sunday, April 4.

Subtracting Sunday's total from Thursday's total gives the number of vaccines delivered Friday, Saturday and Sunday: 2,068 vaccinations total over three days, a low amount that we described as "sucking" in our Monday C19 report.

Easter's Friday is a Canadian statutory holiday, the only stat of the weekend. Strictly speaking, that means Nova Scotia delivered 2,068 vaccines over the holiday weekend, 20 percent of the 10,000 vaccinations Rankin claimed.

But Rankin is a government worker in Nova Scotia, and therefore he probably has an ingrained sense of Easter weekend including Monday, as public institutions like schools are closed. According to the province's Tuesday update, the total vaccinations delivered up to and including Monday is 116,436 doses. Subtracting Thursday's 111,403 doses, we get 5,033 doses. A combined total of 5,033 doses delivered in Nova Scotia on Friday, Saturday, Sunday and Monday. That's half of Rankin's 10,000 long weekend doses.

We've got multiple requests in to the province to find out which number is right. But if Rankin has a tough time getting the scale of numbers correct, that might explain why Nova Scotia is opening up when it seems like the virus is only getting worse.

For the eighth day in a row, Nova Scotia is reporting fresh COVID-19 infections. There are six new cases in the province today, pushing the number of active cases to 36. That's the most active cases in more than a month, dating to the 38 reported February 28. The high for 2021 is 39 active cases on February 27, which we're closing in on (math pro tip: the number 39 is just one greater than 38, which is two more than 36).

Not that 38 or 39 or even 40 active cases is cause for panic. The peak during our first wave was 466 active cases on April 19, 2020, and peak second wave was 142 active cases on December 1. But a rising activity level feels hard to reconcile with relaxing public health restrictions, especially when we don't know if our vaccination program is going remarkably well or straight-up sucking.

Five of today's six new cases are in the Central health zone. "One is related to travel outside of Atlantic Canada," says the province's daily report. "The person has been self-isolating, as required. Three are close contacts of a previously reported case. One is under investigation."

Case number six (or maybe it's case number one) is in the Eastern zone—specifically the Sydney health network according to the localizing chart below—and the province says the patient is connected to another patient.

There's also a correction to the numbers reported yesterday, which is accounted for on our map at the top of this page with provincial case totals. "One case that was reported yesterday in Central Zone has been removed from the cumulative count today," the province says, "as it will be counted in another province."

If that sounds to you like a C19 patient is in Nova Scotia, potentially infecting Nova Scotians, but they technically count in another province's totals because that's how national public health does things, well, that's the way it sounds to us, too. To be sure, we've asked the province to clarify where exactly this person is.

The National Microbiology Lab sent some results back to Nova Scotia, after doing genetic sequencing on a batch of the province's positive C19 tests. It turns out "four new UK variant cases have been identified," according to the provincial update. All these B117 variant cases were in the Central zone—two patients were close contacts of other patients, two had an international travel connection—and the patients are all now recovered from their infections. "At this time, there is no sign of community spread from the variant cases," the province says.

With these four, Nova Scotia has had a total of 22 known B117 cases, making it our most active variant. There have been 10 cases of the 501V2 variant, AKA the South African strain, the most recent getting announced March 16. We still haven't identified a case of P1, the worrisome new variant out of Brazil, which has been found in BC, Alberta, Ontario and Quebec.

Nova Scotia's testing and vaccination programs are still moving slowly after the Easter long weekend. Local labs completed just 975 tests on Nova Scotian samples yesterday, where the daily average over the past week has been over 2,500 tests. And as mentioned above, local clinics delivered 2,965 doses of vaccine yesterday; a week ago, almost 5,200 doses were injected.

Last but not least, for the 10th day in a row, Nova Scotia has one C19 patient in hospital. The province will not say it it's been the same person all 10 days, or multiple patients.

Where Nova Scotia’s COVID-19 cases are on Tuesday, April 6