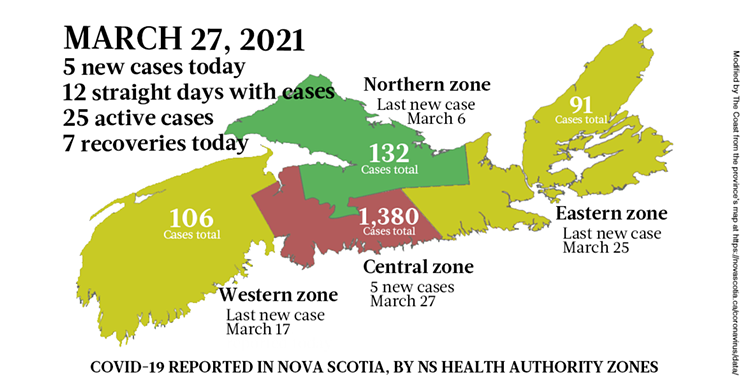 It's the weekend, so we'll start the day with a journalistic sort of brunch—eating our words. In yesterday's report, we said that the province "has been horrible at providing follow-up information" when it comes to "probable" cases, those that aren't conclusively positive or negative. It came up because there was a probable case at Sackville Heights Junior High, and we warned you to "be prepared to never hear about this one again."

Well, we sure got that wrong. Today the province is reporting five new cases, "including one probable case identified yesterday, March 26, at Sackville Heights Junior High in Lower Sackville." For the record, we're sorry. We hoped that case was going to turn out to be nothing. Instead it's the second school-related case in a week, and Sackville Heights becomes the 18th school to have COVID-19 in Nova Scotia's pandemic second wave.

"With two cases connected to schools in the Sackville area, we want to ensure the community has easy access to testing this weekend," says Nova Scotia premier Iain Rankin in today's report. "Our mobile testing unit will be set up at the Sackville Legion on Saturday and Sunday between 9:30 am and 5:30 pm. I encourage anyone to drop in or book an appointment online."

Today's five new patients are all "close contacts of previously reported cases," according to the report, and seven former patients recovered since yesterday, leaving Nova Scotia at 25 active cases. That means the humans beat the disease today.

For the month so far, there have been 68 new cases and 80 recoveries, giving the humans a shot of winning March when it ends in a few days. In 2021, Nova Scotians beat the virus in January, but we lost February badly. To win March and capture the lead for the year, let's be sure to follow team trainer/provincial chief medical officer of health Robert Strang's advice.

"I encourage Nova Scotians to continue to make testing a part of their regular routine," Strang says in today's report, the human-vs-microbe competition clearly on his mind. "Testing remains an important part of our province's defence against the virus, particularly where people have very mild or no symptoms."

Where Nova Scotia’s COVID-19 cases are on Saturday, March 27