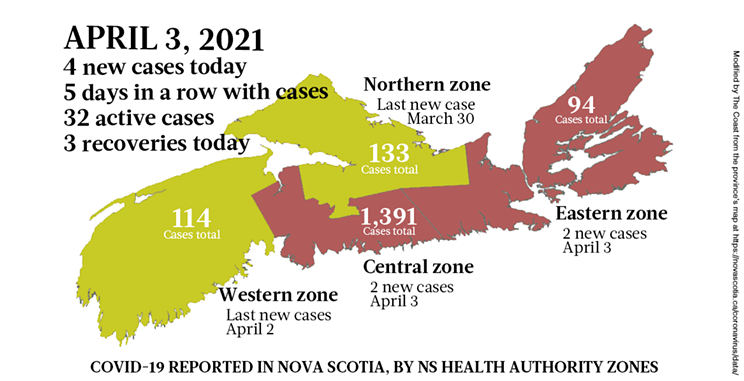 4 new cases as the virus pulls further ahead April 3

Nova Scotia has four new COVID-19 cases today, and only three patients recovered from their infections, meaning active cases rose by one to 32. That's the most active cases the province has had in over a month: On March 1 there were 35 active cases.

So far, the province's April is living up to T.S. Eliot's "the cruellest month" description, as new cases of the virus have outpaced recoveries every day, for a total of 16 cases to nine recoveries. Today's four cases are split between the Central and Eastern health zones. In Central, one case is related to travel beyond Atlantic Canada, says the province. "The other is a close contact of a previously reported case." In Eastern, both are "related to travel outside of Atlantic Canada."

There was an accounting error yesterday that the province is fixing today. "A case reported on Friday, April 2, in Central Zone has been corrected today and is in Western Zone," says the provincial report. Our map (above) and table (below) reflect the corrected numbers.

The province's labs processed 2,352 C19 tests for Nova Scotians yesterday, which is below the current daily average of about 3,000 tests. No information on vaccinations is reported on weekends. And one C19 patient among Nova Scotia's 32 active cases is in the hospital. Someone's been in the hospital every day since last Sunday, although the province will not say if it's the same person.

Where Nova Scotia’s COVID-19 cases are on Saturday, April 3

Note: The two new cases showing up in the table today in the Western zone—one in the Yarmouth community network, the other in the Wolfville network—are accounting corrections for cases announced yesterday, not new patients diagnosed today. One patient was mistakenly credited to the Central zone and needed to be switched to Western, one was announced as being somewhere in Western but wasn't connected to a community network until today.