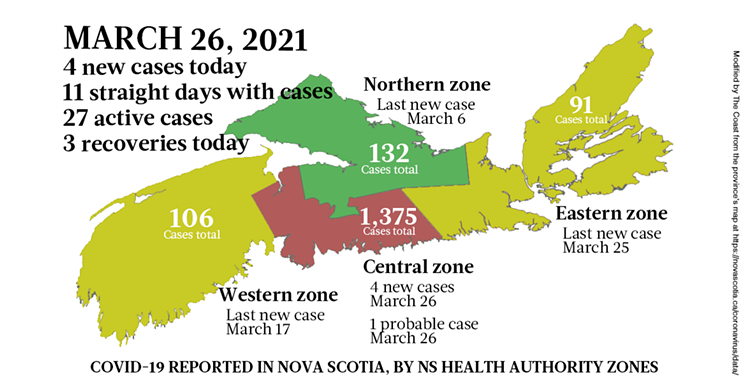 It's a complicated day for coronavirus counting. The province is reporting five new COVID-19 infections in its routine daily update to media, but one of those is the Millwood High School case announced yesterday.

We counted it yesterday in our numbers (like the map at the top of the page and the table below), but the province is only getting it onto its dashboard today. In other words, for Coast readers, there are four cases today and four yesterday. For the province, it's five today and three yesterday. Either way, there have been eight new cases in the last two days. Simple, right? But that's only part of what makes today complicated.

Along with the batch of positive cases, the province is reporting a "probable case" connected to another school—Sackville Heights Junior High School, a feeder school for Millwood.

We haven't dealt with probable cases for a while, but there were a few last August/September involving university students, and back then the province explained how a patient could be probable:

Indeterminate test results do not provide a negative or positive. They may occur because someone previously had COVID-19 and the virus is still detectable in their system, or someone has been tested before the virus is fully detectable. In these situations, public health conducts further assessment, including whether someone had or has symptoms or was recently exposed to someone with COVID-19, to inform how the case is treated. Since probable cases are not confirmed to be positive, they are not included in the total number of positive cases of COVID-19 in Nova Scotia.

For the latest probable case at Sackville Heights, the province says the patient "is connected to a previously reported case. Based on public health assessment, the probable case is being treated as though it is a lab-confirmed positive to ensure all precautions are taken." Those precautions include closing Sackville Heights for cleaning and contact tracing, aiming to reopen next Thursday, April 1. (Imagine the April Fool pandemic prank possibilities.)

For previous probable cases, the province has been horrible at providing follow-up information either voluntarily or under explicit questioning, so be prepared to never hear about this one again. It is not being counted as a positive by us or the province.

Today's new confirmed positive cases are all in the Central health zone. Two are connected to previous cases. (The Millwood case we already counted turns out to also be connected to a previous case, according to today's provincial report.) The other two cases are "under investigation" as the cause is not immediately obvious as tied to travel or another patient. That mean not only has the threat of school spread become a thing, but so has the fear of uncontrolled community transmission. Forget TGIF—this Friday report actually sucks.

For the report's other numbers, provincial labs completed 2,846 tests for Nova Scotians yesterday, considerably higher than the current average of about 2,000 daily tests. There are 27 active cases in the province, a high we haven't reached in almost three weeks, but at least none of those patients are in hospital.

And in the only bit of good news from the report, the province hit another daily vaccination record by injecting 5,717 doses on Thursday. Last Thursday set the then-record at 2,860 jabs, and just one week later the injection rate has doubled. That's not good news, it's great news.

Where Nova Scotia’s COVID-19 cases are on Friday, March 26