4 books about the history of slavery in Canada to read this Emancipation Day weekend | Arts + Culture | Halifax, Nova Scotia | THE COAST 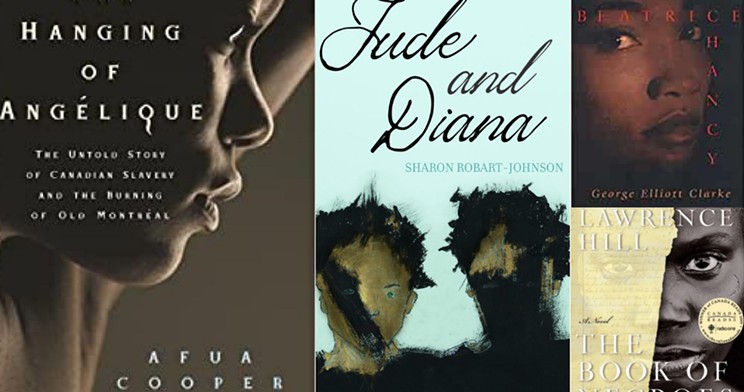 Some titles to add to your reading list this weekend.

From the award-winning fictional account of two enslaved sisters to a book based on court transcripts that took over a decade to research, here's your long weekend reading list.

This weekend marks the second annual celebration of Emancipation Day in Nova Scotia, an anniversary of the historic end to slavery across the British Empire. So-called Canada has a 200-year history of slavery—and Halifax itself hosted slaver’s ships in its harbour. Yet, public knowledge of this chapter of the past—and its effects on the systemic racism of today—is slim. As Dr. Charmaine Nelson, founder of The Institute for the Study of Canadian Slavery (located at NSCAD) told The Coast last summer: “We have a 200-year history of slavery in this country and it's not being taught at any level of curriculum: Not in grade school, not in high school, not in college and not in university…We are so far behind it’s ridiculous.”


Listening and learning remains a good place to start. Here, a mix of revered classics and those soon to join their ranks provide a local entry point into a better understanding. (Also, all of them are available at a Halifax library branch near you!)


Jude and Diana by Sharon Robart-Johnson

While the only evidence we have of Jude’s life is the account of the trial of her murderers—white slave owners who were acquitted—author Sharon Robart-Johnson delivers a deeply researched and unflinching look at what the enslaved woman’s life in late 1700s Nova Scotia was like. A split narrative between two sisters—the titular Jude and Diana—sees Robart-Johnson not only giving voice to the voiceless but recognizing the human dignity her subjects were so often stripped of.


The Hanging of Angélique by Afua Cooper

Former Halifax Poet Laureate Dr. Afua Cooper’s The Hanging of Angélique: The Untold Story of Canadian Slavery and the Burning of Old Montréal (Race in the Atlantic World, 1700–1900 Ser.) took 15 years of research to write. Diving into the story of an enslaved woman blamed for starting a fire that burned large swaths of 1734 Montreal, the book also acts as a primer on Canada’s overlooked 200-year legacy of slavery. As Cooper’s website puts it: “Afua Cooper draws on extensive trial records that offer, in Angélique’s own words, a detailed portrait of her life and a sense of what slavery was like in Canada at the time. Predating other first-person accounts by more than forty years, these records constitute what is arguably the oldest slave narrative in the New World.”

Many poems by the Order of Canada-appointed George Elliott Clarke deal with slavery, but his complex, devastating book Beatrice Chancy is a categorization-defying standout. Taking a well-known murder story from 16th century Rome (where it went on to serve as inspiration for countless numbers of great European authors and was even an opera) and transplanting it to slavery-era Nova Scotia, Clarke tells the story of a thwarted love, monstrous abuse and the desire to end human suffering. Clarke’s fiery prose meets its match in a story that feels fallen from the epics into his beloved Africadia (the term he coined for African Nova Scotian lands, culture and people).


Book of Negroes by Lawrence Hill

Lawrence Hill’s smash-hit Book of Negroes was inspired by a historical document of the same name that lists names and descriptions of 3,000 Black Loyalists who found freedom in Nova Scotia. Considered by many to be the Roots of its generation, the book traces slavery’s path across continents and eras, noting its unmeasurable human cost.