A crowd of dozens unfurls in a slowly-growing line while the smell of maple syrup wafts through the air. Necks crane, feet shuffle and arms ball up winter jackets.

The snaking squiggle, tracing around the Discovery Centre, is waiting for another type of national cultural touchstone: The chance to meet the tech-obsessed, Canadiana-cataloguing titan of Can-Lit, Douglas Coupland. 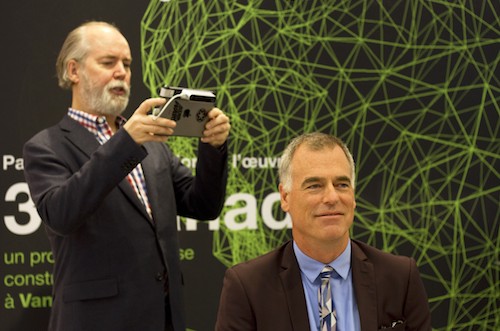 While details are sparse on what the finished product will look like (“I don’t want to self-limit,” Coupland explains) the method garners a hushed silence from the crowd.

“We’re going to use all 2000 busts and keep all the glitches, they’re actually quite beautiful. Picture something like a mushroom farm,” he says, watching a member of the line sit still as her image is captured on an iPad and rendered on a computer screen.

Soon, a faint buzzing begins and the smell of maple syrup grows: The 3D printer begins shooting out small ribbons of filament that meld into a miniature version of the woman’s head. 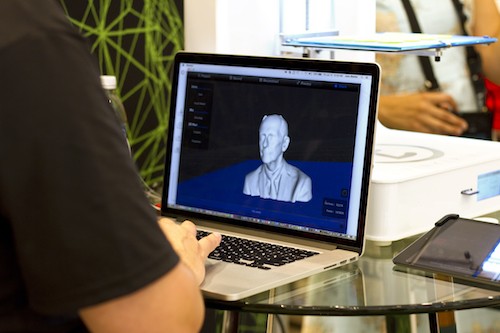 submitted
After scanning, the subject's image is rendered on a computer screen.
“It’s the same plastic used to make maple syrup containers,” Coupland says with a shrug, as if this small, so-Canadian-it-hurts detail was an obvious one. “It’s the same as a 20 dollar bill. Have you ever scratched and sniffed one of them?”

A cashless wallet doesn’t allow him to prove his point, but that might be for the best—it’s one of those small things you’d like to think could be true.

The line pushes further into the room, bodies pressing more insistently close to the 3D printers. “It’s like those photographs of people in 1947 looking at a TV for the first time in the department store window. Everyone’s heard of 3D printing but no one’s actually seen it.” 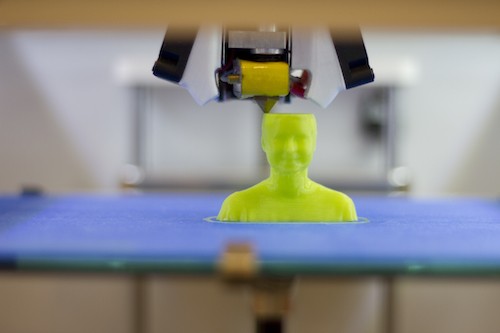 submitted
The petite printed sculptures are about the size of your palm.
Participants will receive a copy of their bust via mail in the coming days, and the finished compilation will be unveiled this November. In the meantime, Coupland has loved getting to meet so many of the country’s faces: “What’s kind of wonderful is that it’s people of all ages and this is their first experience with 3D printing.”

Coupland says he has a bowl of 3D printed hands on his kitchen table—mementos from dinner party guests. Soon, hundreds of tables across the country will have their own 3D printed mementos, pieces that Coupland will quilt together to represent a national mosaic. “I’m not here to talk about the potential evils of technology,” he says. “I’m just here to make art.”