A small sampling of the groundbreaking and change-making impact The Coast has had on Halifax over the past 25 years.

“Adam’s fall”
Matthieu Aikins’ award-winning feature on suicides from the Macdonald Bridge is a heartbreaking read even now, a decade after its publication. A year after Aikins’ story was printed, the bridge commission finally decided to install safety barriers along the old bridge to prevent future deaths.

Seals of approval
One of the most-read stories we’ve ever published was Linda Pannozzo’s 2010 feature on the grotesque plan by Fisheries and Oceans Canada to cull 220,000 seals on Sable Island—a massive $35-million slaughter involving mobile crematoriums and modified tree-harvesting equipment. Pannozzo followed that incredible piece with two more celebrated seal reports examining the cod fishery and how the government tried to kill its way out of an ecological crisis.

“Inside the Square”
When it opened in 1966, Uniacke Square was hailed as a new beginning for urban renewal. But the public housing project was quickly and incorrectly stigmatized by the city’s white elites as a violent ghetto. As Stephen Kimber demonstrates in this 2007 feature, it’s actually home to loving families, laughing kids and one of HRM’s most vital communities.

Michelle Coffin reclaims her story
Stephen McNeil was on top of the world after winning a second majority government last spring. But the mood changed 24 hours later when Maggie Rahr published this astonishing story about how the Liberals abandoned Michelle Coffin and stood by the man who assaulted her—the premier’s spokesperson. No one was talking about the election anymore. 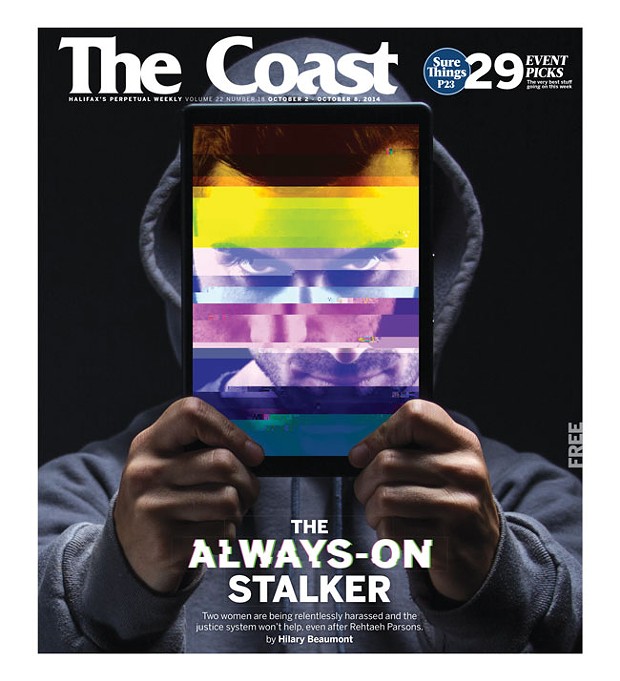 “The always-on stalker”
A terrifying story of an obsessed ex-boyfriend who harassed, violated and traumatized a woman from the legal safety of his computer screen. Hilary Beaumont’s award-winning piece offers no leniency to the police who shrugged off the woman’s pleas for help because the crimes involved the internet. “Not our best effort,” deputy chief Bill Moore later admitted.

Multiple On Patrol fixes
Our municipal malfunction column spent decades calling out broken lights, overflowing garbage cans and unsafe crosswalks all over the city. No civic inconvenience was too small to drag some middle manager in print. The results weren’t the stuff of prestigious journalism awards, but we stand here today proud, knowing we helped fix dozens of honest-to-goodness problems and made the city shine a little brighter. Our personal favourite? The tree we got planted outside The Coast’s former entrance on Cunard Street.

Blotter stalemate
The Coast was a longtime advocate for making the Halifax Regional Police blotter public. Finally, success seemed in hand. The cops announced Halifax would become the first department in Canada to release a public police blotter in full. Several years later there’s still no blotter, but you can’t say we didn’t try.

“Five years of solitude”
No one had bothered to put a number on the overuse of solitary confinement in Nova Scotia’s prisons until The Coast filed a Freedom of Information request for the figures. What we found were nearly 10,000 cases in a five-year period, thousands of which involved young offenders. Our 2015 cover story was a stark portrayal of how routinely prisoners are subjected to torture while inside provincial care.

Peter Kelly’s disgrace
The symphony of scandals wrought by former HRM mayor Peter Kelly—including concert payments, Occupy evictions and harbour cleanups—crescendoed in 2012 with Tim Bousquet’s investigative feature, “A trust betrayed.” The mayor spectacularly failed in his role as executor of elderly resident Mary Thibeault’s will, withholding hundreds of thousands of dollars from charities and heirs (one who died waiting for his full inheritance). It didn’t take long for Kelly to announce he wouldn’t re-offer in that fall’s municipal election, putting a sad and infuriating end to his political career (in Halifax, at least).

“Abuse of power”
When three rogue cops began pressuring local businesses to stop advertising with The Coast because of “Savage Love,” editor Kyle Shaw took the officers to court. Shaw not only won a victory for local journalism, he also put the police on notice that this paper would not back down.

Canada Day 150
Forgoing the red-and-very-white Trudeau mania sweeping the country, The Coast instead turned its July 1 issue over to editor and HRM poet laureate Rebecca Thomas. The front cover boldly featured a breathtaking piece of original art by Wasauksing First Nation artist Joshua Pawis-Steckley, which we’ve been told is now hanging up inside the Halifax police department’s equity and diversity office.

Sea change
A #MeToo reckoning for the local service industry. Zane Kelsall, founder and co-owner of Two If By Sea Cafe and Anchored Coffee, left the businesses after multiple women brought forward tales of sexual harassment and allegations of assault. The following week, writer Melissa Buote collected dozens of anonymous stories of harassment in the restaurant industry, showing the problem wasn’t isolated to one man.

Raw sewage
It was supposed to sanitize the harbour into an oasis free of floatables. In reality, the city’s fancy sewage treatment plant broke down less than a year after coming online. The details of the malfunction were hidden by a wall of secrecy and closed-door meetings at city hall. That is until news editor Tim Bousquet pooled the expertise of engineers across the continent to illustrate what went wrong.

“Before the murder and after”
Tyler Richards was a volunteer and community pillar. He was also a Black man with prior arrests. His murder was dismissed by some commenters as just another “thug” getting what he deserved. In her award-winning feature, Lezlie Lowe looks past those racially charged views the man who was Tyler Richards and the complicated, tragic life he left behind.

out of control
It took several months for us to get a copy of the police department’s 2016 drug exhibit audit, but once we did it became clear why HRP wanted it kept quiet. More drugs and cash were missing from evidence control than what was actually on the shelves. The subsequent exposé rocked the department and caused at the Board of Police Commissioners.

Gerald Regan
It was a Pyrrhic victory, writes Stephen Kimber. The remaining eight charges of sexual assault against former Nova Scotia premier Gerald Regan were dropped. It’s not that the Crown didn’t have sufficient evidence, but a conviction seemed unlikely. The accused serial sexual predator walked a free man, but his reputation was far from vindicated. When Regan eventually dies, this 2002 cover story will serve as his obituary.

Dan Savage
To this day there are Haligonians who think Dan Savage lives in this city. It’s been that way ever since The Coast started publishing the Seattle editor’s internationally syndicated sex column way back in 1996. In those halcyon days, writing about was considered obscene by the city’s fathers. Today, protests against Savage are more often aimed at his past transphobic and biphobic statements. How far we’ve come.

The Nova Centre
We called it. lot of good it did us all.

Living with AIDS
Lezlie Lowe’s landmark three-part series profiled a heterosexual woman, a gay man and an intravenous drug user all infected with HIV and AIDS. But pigeonholing those human beings as a disease is what happens far too easily when writers talk about the HIV-positive. As Lowe skillfully demonstrates, their lives are messy, complicated and wonderful. Just like yours.

Council tweets
Tim Bouquet didn’t invent live-tweeting municipal politics, but he certainly popularized the craft at Halifax City Hall. Suddenly, the strategies and absurdities of city council were being chronicled live in bite-size chunks of wry criticism and sardonic wit. For better and worse it exposed the city’s political decision-making in a novel new format that carries on to this day with every reporter in media row.

“Citizen Gus”
If we’ve done nothing else for this city, let it be known that we formally filed an application to bestow an Order of Nova Scotia designation on Halifax’s beloved tortoise. We got down in the grass with the Museum of Natural History’s ancient mascot to find out what’s going on behind that expressionless face that generations have grown to love.

“Publishing johns’ names”
While other media outlets trafficked in stories of young girls snatched by gangs and violent murders etched out in purple prose, Halifax’s new alt-weekly hired its own sex worker columnist in 1993 to write about her trade from a first-voice perspective. Debra called out established media for putting women’s lives at risk and defined The Coast’s desire to be a voice for the underrepresented.

The Sands
Stephanie Johns spearheaded this ambitious project to transform our paper into Fort McMurray’s newest alternative weekly, The Sands. From cover to cover we wrote about the regional relationship between Nova Scotia’s families and Alberta’s need for hard-working east coasters. The special online version of the feature was nominated by the Atlantic Journalism Awards for Best Multimedia Feature. 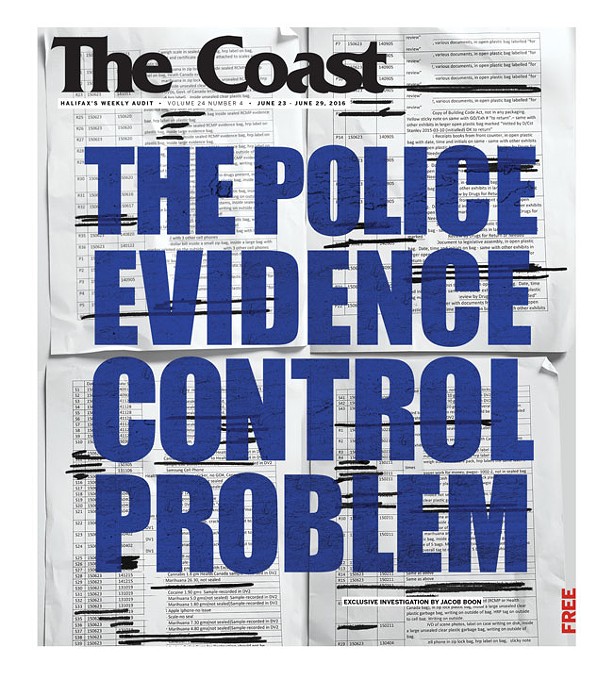 Election 2016
With the city’s paper of record strike and staffed by scabs, The Coast took it upon itself to cover every angle and player jockeying for power in HRM’s last municipal election. Between staff and freelancers, we published over 100 stories—profiling districts, interviewing candidates and covering debates.

Derry
A rash of gun violence in 2016 left multiple men dead and a city grieving. In a special Voice of the City, 12-year-old Kyasiah Derry pleaded for the shootings to stop. Derry’s own father, Jaumar “Maury” Carvery, had been killed eight years ago in a similar incident. “Every day I wake up, I ask myself why someone had to take such a beautiful person from me, and it hurts my soul,” she writes, with an anguish no child should ever experience.

“Chasing Amy”
Amy Lee Collins was widely recognized in Halifax, but not well known. When she wasn’t washing windshields for spare change, she was a beloved artist, activist and wife. Her death was memorialized on a whitewashed wooden pallet propped up on a median strip running along North Park Street. Then her story was told in this powerful 2007 feature by Lezlie Lowe, using writing and artwork from Amy’s own journals.

Uncommon concerts
One of the most infamous events in Halifax’s history was the concert scandal. Mayor Peter Kelly and deputy CAO Wayne Anstey improperly (if not illegally) offered millions of dollars in loans to concert promoter Harold MacKay, enabling MacKay to put on shows at the Halifax Common. The city ended up having to swallow $380,000 of those loans that MacKay never paid back. Covering every sordid detail along the way was The Coast.

Publishing our first issue
All of the stories before this come back to a rash decision by six King’s students 25 years ago to start their own newspaper. It’s been the battleground against abuses of power—a champion for the city’s afflicted that’s punched above its weight thanks to the work of iconic writers. We couldn’t have done it without them, and we couldn’t have done it without you reading us every week. Thanks, Halifax. We promise the best is yet to come.